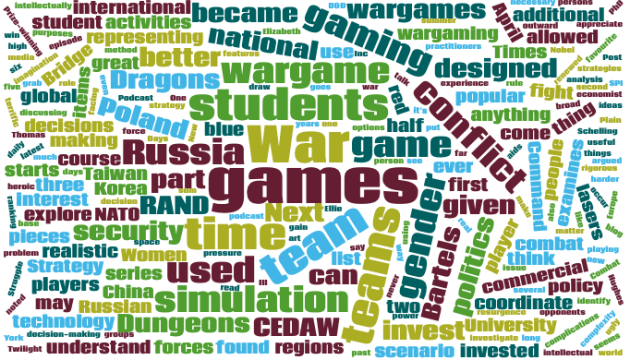 PAXsims is pleased to present some recent items on conflict simulation and serious games that might be of interest to our viewers. 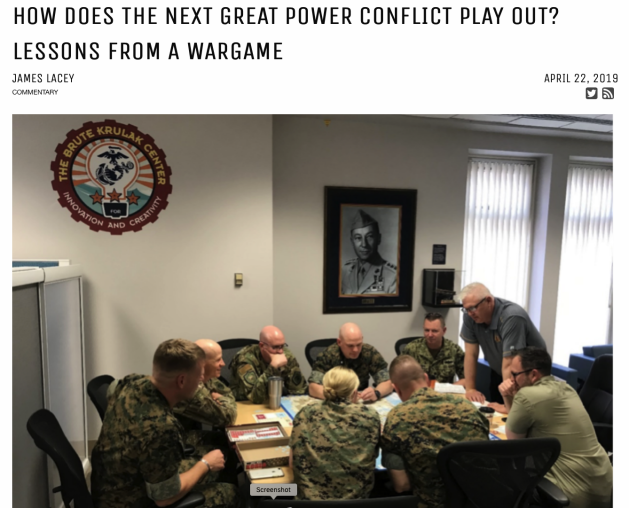 At War on the Rocks, James Lacey examines the use of wargames to explore contemporary great power politics:

The United States can win World War III, but it’s going to be ugly and it better end quick, or everyone starts looking for the nuclear trigger.

:That is the verdict of a Marine Corps War College wargame I organized that allowed students to fight a multiple great state conflict last week. To set the stage, the students were given an eight-year road-to-war, during which time Russia seized the Baltics and all of Ukraine. Consequently, the scenario starts with a surging Russia threatening Poland. Similar to 1939, Poland became the catalyst that finally focused NATO’s attention on the looming Russian threat, leading to a massing of both NATO and Russian forces on the new Eastern Front. China begins the scenario in the midst of a debt-related financial crisis and plans to use America’s distraction with Russia to grab Taiwan and focus popular discontent outward. And Kim Jong-un, ever the opportunist, decides that the time has arrived to unify the Korean peninsula under his rule. For purposes of the wargame, each of these events occurred simultaneously.

Teams were allowed to invest in advance in capabilities and emerging technologies:

The wargames were played by six student teams, or approximately five persons each. There were three red teams, representing Russia, China, and North Korea; combatting three blue teams representing Taiwan, Indo-Pacific Command (Korea conflict) and European Command. All of these teams were permitted to coordinate their activities both before the conflict and during. Interestingly, although it was not part of the original player organization the Blue side found it necessary to have a player take on the role of the Joint Staff, to better coordinate global activities.

Prior to the wargame, the students were given a list of approximately 75 items they could invest in that would give them certain advantages during the game. Nearly everything was on the table, from buying an additional carrier or brigade combat team, to taking a shot at getting quantum computing technology to work. Each team was given $200 billion dollars to invest, with the Russians and Chinese being forced to split their funding. Every team invested heavily in hypersonic technology, cyber (offensive and defensive), space, and lasers. The U.S. team also invested a large sum in directed diplomacy. If they had not done so, Germany and two other NATO nations would not have shown up for the fight in Poland. Showing a deepening understanding of the crucial importance of logistics, both red and blue teams used their limited lasers to defend ports and major logistical centers. 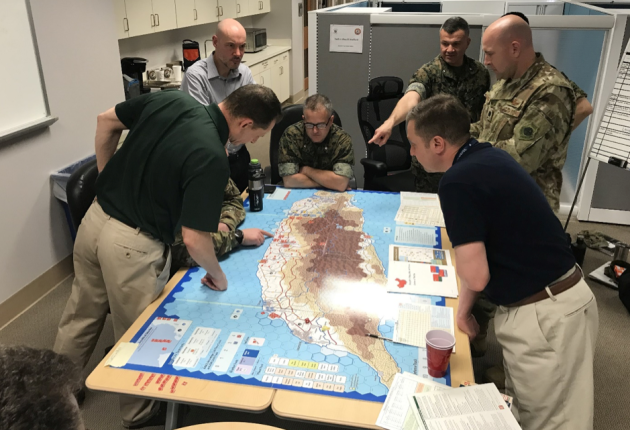 The games were adapted from GMT Games’ Next War series:

For those interested, the games used are all part of GMT’s Next War Series, designed by Mitchell Land and Greg Billingsley. I have found these commercial games are far more sophisticated and truer to what we expect future combat to look like than anything being used by RAND, which employs rules and methods designed for Simulations Publication, Inc. (SPI) games in the 1970s. But they are not alone in this, as most of the Department of Defense’s wargaming community is decades behind commercial game publishers when it comes to designing realistic games. In fact, if I was to fault the Next War series for anything, it is that it may be overly realistic and therefore very complex and difficult to master, and time consuming to play. Thankfully, the designer has agreed to produce a simplified rule-set that will allow for more student iterations without sacrificing realism.

War games are useful intellectual aids because they force players to make decisions under pressure. While people may intellectually understand a problem, gaming forces them to think even harder.

As the Nobel Prize-winning economist Thomas Schelling put it, “one thing a person cannot do, no matter how rigorous his analysis or heroic his imagination, is to draw up a list of things that would never occur to him.”

By facing off against opponents over a well-designed war game, people can come to see how political and military structures interact and appreciate the trade-offs and complications that come with making decisions in a competitive environment.

He goes on to identify a few of his favourite games, ranking each for complexity and playing time: Washington’s War, 13 Days, Combat Commander: Europe, A Distant Plain, Twilight Struggle,

Over the past several years there has been a renewed interest in using gaming as a method to investigate national security decision making, explore policy and strategy options, and gain experience as practitioners. In this episode of the Strategy Bridge Podcast, we talk with Elizabeth Bartels about how wargames are designed, the differences in approaching gaming as an art and a science, and how games are used to think creatively about global competition. Bartels is a PhD candidate studying national security policy gaming at the Pardee RAND Graduate School. 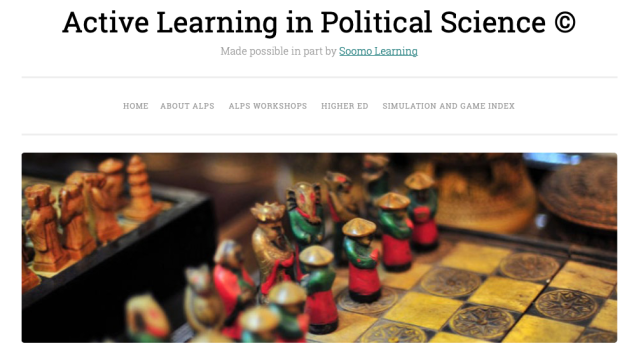 How can a simulation help students to better understand gender and interational relations? At the Active Learning in Political Science blog Susan Allen (University of Mississippi) has some ideas.

This semester I am teaching a course on gender and international politics for the first time. The first half of the course examines gender and representation, while the second half explores gender in international politics. I aimed to bridge these two sections with a simulation that I created on child marriage—something currently on the agenda of the Office of the High Commissioner on Human Rights and a likely topic at the Convention for the Elimination of Discrimination Against Women (CEDAW) this summer.

Students have been working in groups by regions of the world to expand their knowledge base beyond their own experiences. For the simulation, they became spokespersons for their designated regions. As additional preparation, students read about CEDAW and an excerpt from Women, Politics, and Power by Paxton and Hughes. I did not inform them beforehand of the particular issue that would be discussed as part of the simulation, other than to say that the activity would resemble a communication from CEDAW….

The mainstream media seems to have almost daily pieces these days on the resurgence of Dungeons & Dragons. One thing noted in most pieces is how much more inclusive the game has become, with a large and growing proportion of female players.

I’ve long argued that D&D is a terrific way of refining a broad range of creative, leadership, and team skills—including developing wargame design and facilitation.