You can now purchase AFTERSHOCK from The Game Crafter. To visit their shop, click the “shop now” button on the right.

(If The Game Crafter shop shows an “Add to Wish List” button, this indicates that some game components are currently out of stock. You can purchase a version with substitute components here—game play is not affected.)

For information on forthcoming AFTERSHOCK demonstrations, click here. If you would enquire about the cost of a fully-facilitated AFTERSHOCK humanitarian assistance/disaster relief training session for your group, or about the customization of game materials for your organization or specific needs, please email us. All profits from the sale of the game are donated to the World Food Programme and other UN humanitarian agencies.

AFTERSHOCK: A Humanitarian Crisis Game is a boardgame that explores the interagency cooperation needed to address the emergency and early recovery phase of a complex humanitarian crisis. Designed for 4-8 players, it can be played with fewer (even solitaire), or more (with players grouped into larger teams). Game play takes two hours.

AFTERSHOCK is set in the fictional country of Carana, but is loosely modeled on disasters such as the 2004 Indian Ocean tsunami and the 2010 Haiti earthquake:

Carana has suffered years of sometimes violent turmoil, and has only recently taken the first steps to tentative steps to national reconciliation and reconstruction. Poverty is widespread, government capacity is weak, and ethnic and political tensions remain high. Nongovernmental organizations and United Nations specialized agencies are active in the country, including a moderately-sized UN civilian police (CIVPOL) contingent.

At dawn today, a powerful earthquake struck the capital city of Galasi, causing widespread destruction of homes and infrastructure. Tens of thousands of people are in need of urgent aid and medical attention. At the request of the government of Carana, military forces from several friendly countries—operating as the multinational Humanitarian Assistance and Disaster Relief Task Force, or HADR-TF—are en route to assist, as are additional contingents of UN and NGO personnel together with much-needed relief supplies.

The game covers approximately three months of humanitarian operations, including both the initial emergency and a later period of early recovery. Because Carana is a fragile, conflict-affected country, relief and reconstruction efforts may also involve issues of social unrest and political instability, especially during the early recovery stage once the initial shock of the crisis has worn off.

The primary objective of all players is to address the urgent humanitarian needs of the local population. However, players also need to maintain public and political support for their organizations, whether to govern (Carana), sustain the relief mission (HADR-TF), or secure financial support (UN and NGOs).

Each district of the capital is in need of urgent humanitarian assistance, as well as presenting other challenges. A needs assessment would take staff and time—but would help teams to plan ahead.

Key issues highlighted in the game include:

Participation in coordination meetings with other players can aid in humanitarian response. However, there are always new challenges and unforeseen events to contend with.

PAXsims will be releasing several expansion sets for AFTERSHOCK that highlight specific themes and issues. The first of these expansions focuses on the gender dimensions of humanitarian assistance and disaster relief.

A list of forthcoming demonstration games can be found here.

AFTERSHOCK in the Classroom

Overall feedback from the players was immensely positive, with the vast majority of them agreeing that the game was not only enjoyable, but also provided a good introduction to some of the likely practical realities encountered on humanitarian operations. One senior Chilean army officer commented that the confusion and commotion at the beginning of the game bore a close resemblance to the discord that he experienced personally in a real earthquake relief operation in Chile. Another senior army officer claimed that, owing to the nature of his profession, he was initially very focused on his team’s individual mandate. However, as his appreciation of the game’s wider issues developed, he quickly learned the benefits of resource-sharing and working with other teams to achieve both individual and collective humanitarian mandates.

Similarly, surveys of participants at McGill University and in the Canadian Disaster and Humanitarian Response Training Program have also shown very positive results:

A 2018 study published by the GMS Journal of Medical Education examining the effectiveness of AFTERSHOCK in teaching medical students found that “participants overwhelmingly [found] the simulation to be a useful or very useful way to learn about the challenges of humanitarian assistance and disaster relief.”

Similarly, the director of the Canadian Disaster and Humanitarian Response Training Program, Kirsten Johnson, notes that “AFTERSHOCK provides students with the unique opportunity to apply the knowledge and skills they learned in the classroom in a real-to-life, interactive, fast-paced and (intentionally) somewhat stressful simulated humanitarian crisis. It is an exciting addition to the Program, providing a great educational tool that is also a lot of fun.” MAJ Scott Cole at the 9th Mission Support Command states that “AFTERSHOCK is an excellent training tool. It focuses players on the criticality of coordination and logistics during a HADR event, and does very well in simulating the initial chaos of a disaster. Our training was a resounding success.”

AFTERSHOCK at the Canadian Humanitarian and Disaster Response Training Program 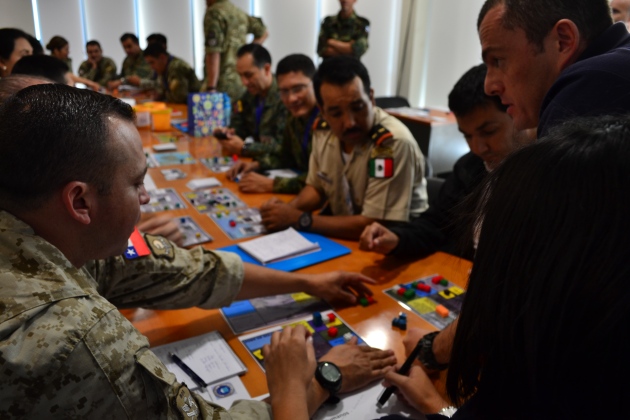 AFTERSHOCK being played by members of the 9th Mission Support Command, US Army Reserve.

#TuesdayTactics #wargaming
The CSF battlestaff ran through #Aftershock, a Humanitarian Crisis Game where agencies work to tackle chaotic events that follow a natural disaster.
A good planning tool, relevant and helpful for our role ready respond to Hurricanes in the #Caribbean. pic.twitter.com/zrYhDczFGf

For thoughts on how to introduce and facilitate AFTERSHOCK in the classroom, see also this post on PAXsims.

The following materials are all downloadable for free from the AFTERSHOCK shop at The Game Crafter:

If you want to play AFTERSHOCK online, try the module developed for use with Table-Top Simulator or use the VASSAL module.

AFTERSHOCK grew out of the “game lab” held at the 2013 Connections interdisciplinary wargaming conference, which focused on HADR operations following the 2010 Haiti earthquake. The game design was subsequently developed by Rex Brynen and Tom Fisher.

Rex Brynen is Professor of Political Science at McGill University, where he teaches courses on humanitarian and peace operations. Author or editor of eleven books on various aspects of security, politics, and development in the Middle East, he is coeditor of the conflict simulation and serious games website PAXsims. In addition to his academic work, he has served as a member of the Policy Staff of the Canadian Department of Foreign Affairs, an intelligence analyst for the Privy Council (cabinet) Office, and as a consultant to other government departments, aid organizations, the World Bank, and United Nations agencies. In 2011 he won in International Studies Association’s Deborah Gerner Innovative Teaching Award for his work on educational games.

Thomas Fisher is a freelance game designer, based in Montréal. He has previously designed professional education simulations for the World Bank and the Egmont Group of national financial intelligence agencies.

Special thanks are due to David Becker, Brant Guillory, Ty Mayfield, Gary Milante, Joshua Riojas, and Brian Train for co-facilitating discussions at the Connections conference, and to Eric Freeman, June McCabe, Ecem Oskay, Hiba Zerrougui, and others from the McGill Conflict Simulation Group for help with playtesting.

If you have questions about playing the game, check out our AFTERSHOCK FAQs page.