On February 24, almost two dozen defence analysts, game designers, academics, and conflict simulation students met at McGill University for the CONNECTIONS NORTH miniconference on professional wargaming in Canada. It was a modest affair, but also a resounding success, I think—possibly the largest meeting of its kind ever held in Canada.  We were also buoyed, of course, by the official message of support and encouragement sent on in advance of our meeting by our British wargaming colleagues at Dstl. A key impetus for the meeting was the presence of a number of professional colleagues from Ottawa and Kingston who had travelled to Montreal for the DIRE STRAITS megagame at McGill on Sunday, which will be the subject of a subsequent report.

Waiting for things to start.

The afternoon started off with three surveys of wargaming and other serious gaming. Ben Taylor (Defence Research and Development Canada) discussed the development of gaming techniques to support and enhance the Capability-Based Planning (CBP) process. DRDC CORA is exploring matrix games as a relatively simple method for exploring scenarios and scenario development, and recent games involving a former defence planning scenario have found considerable receptivity. One advantage of a matrix game approach, he suggested, is that players are not limited by game components, and therefore more likely to think broadly and creatively. In the discussion that followed, participants raised such issues as the need for senior leadership-buy in, possible limitations of matrix games for operation or tactical-level gaming, the strengths and weaknesses of more structured gaming techniques (such as RCAT) and how various gaming approaches might be integrated, and where in the CBP gaming methodologies best fitted. You’ll find a copy of Ben’s slides here.

Next, I offered an overview of various gaming initiatives that I have been involved with, whether in a teaching capacity at McGill University, in support of educational and policy research initiatives elsewhere, or through PAXsims. I also raised the issue of how best to carry forward the momentum we have seen in Canada in the past year or so, marked by the establishment of the CONNECTIONS NORTH email list for professional wargamers/policy gamers, the informal networks that have emerged from the Diplomatic Challenges in the South China Sea game that Global Affairs Canada sponsored last fall, from DRDC initiatives, and now from this conference. You’ll find the slides from my presentation here.

Anja van der Hulst (TNO) then discussed some of the game initiatives she has been involved with recently. Of particular interest was her discussion of exploring hybrid warfare using matrix games. She noted that game design and components had a substantial impact on game play, with a preponderance of military assets predisposing players to kinetic methods. Anja also raised the important role that emotions and other psychological factors can play in shaping player behaviour and strategy. This spurred considerable discussion throughout the conference as to how best to encourage players to internalize game narratives and respond in ways that resemble either the psychology of particular actors, or their value systems, fears, and concerns.

A coffee break followed, complete with Timbits. This was a Canadian wargaming conference, after all.

After the break, Jim Wallman (Stone Paper Scissors) offered some perspectives on the UK Royal Air Force’s recent Eagle Warrior exercise, which consisted on one major wargame and  series of associated games. As noted by the RAF:

This operational-level war game was the first of its kind in eight years but was in fact much more than a game alone, it was a platform for conceptual analysis and critical thinking as well as the development of further interoperability with our Allies.

The wargame lasted two weeks with multiple games being played throughout, focussing on how wars might look in 2030.

While Jim was constrained to address only unclassified aspects of the exercise, he offered extremely valuable insight into the challenges of senior leadership engagement (both as a positive factor, and as a challenge for game facilitation), rapid game design, and the importance of game design and materials in shaping player experiences.

All of this led nicely into a presentation by Tom Fisher (Imaginetic) on “Design Thinking in Games,” in which he discussed how the presentation of a game shaped player experience, above and beyond the formal system represented in the game rules. Specifically, he drew upon Don Norman’s three levels of game design: visceral, behavioural, and reflective. Visceral design addresses the almost unconscious impact of graphic design and game components on how players “feel” about the game, and the intellectual and emotional associations these stimulate. Behavioural design is about usability, and how the graphic presentation of the game enhances, or detracts from, playability. Finally, the reflective element of design concerns how a player rationalizes the game experience, and the impact that it has. Throughout, Tom warned about inappropriate graphic or component choices that force players out of engagement and narrative (and also warned against the danger that beguiling graphics can result in players accepting unrealistic or misleading models of reality). Finally he emphasized the importance of making game designs as simple as possible for a given purpose, the value of “dual coding” (in which text and graphics are mutually reinforcing), and how one can use a player’s preexisting mental model to make something more acceptable and convincing. You’ll find a copy of his slides here. 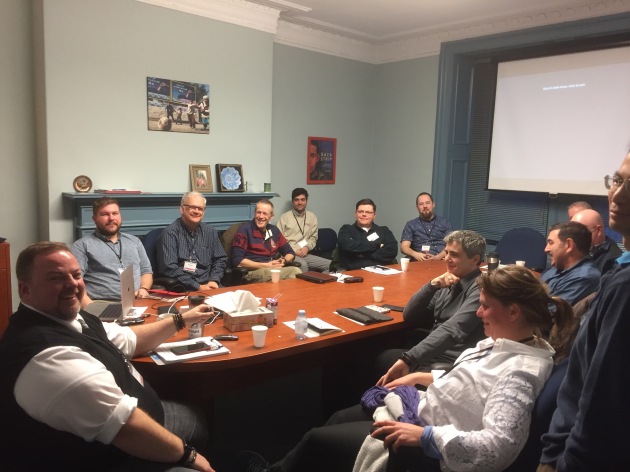 Some of the participants at CONNECTIONS NORTH.

That ended the formal activities for the day. In the evening, however, we ran a game of A RECKONING OF VULTURES from the Matrix Game Construction Kit (MaGCK) for those who wanted to stick around.

A RECKONING OF VULTURES is set in the capital of the fictional Republic of Matrixia. There, in the ornate Presidential Palace, surrounded by his most loyal Presidential Guards, the President-for-Life lies on his death-bed—and various power-hungry factions are jostling to take power themselves. Once the President passes, competition between these would-be successors will escalate into open conflict, until the Central Committee of the Ruling Party can meet and agree on a new leader.

The game was designed to show how matrix games can be used to explore a range of issues and modalities, from political maneuvering through to tactical employment of force in complex urban environments. 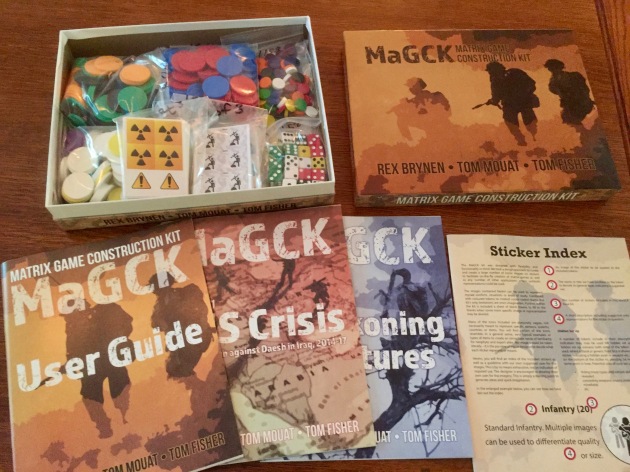 In the first phase of our game, the Central Security and Intelligence Directorate (secret police) largely focused on gaining information and leverage, including control over the media. The Matrixian Armed Forces moved potentially disloyal troops away from key power centres, and focused on securing the loyalty of the armed forces. The Ministry of Interior dispatched police units to the potentially rebellious university campus, while the Oligarchs rented thugs and bribed religious leaders. The National Union of Toilers (NUT) infiltrated union organizers into the police unit guarding the prison, as well as a key armoured battalion (which had spent days parading around the city since no one wanted it outside their power base).

Early in the game of A RECKONING OF VULTURES.

When the President-for-Life died, NUT sympathizers in the police seized the main prison, while the tank battalion declared itself a supporter of the proletarian revolution. CSID control of the media and the Oligarchs’ influence with religious establishment allowed both of them to shape public expectations. The MAF commander was successful in both ordering military reinforcements to the city and securing the loyalty of the Presidential Guard, both of which then attacked CSID headquarters with support and encouragement from NUT protesters. Although the CSID spymaster managed to escape this attack, his efforts to relocate to the Central Bank were foiled when his thuggish convoy of black SUVs was shot up by soldiers at a MAF checkpoint. At a critical moment, the NUT-controlled tanks stormed the campus, and freed the students there from the tyranny of police occupation.

Finally, the Central Committee of the Ruling Party met. The Minister of the Interior went into the balloting with a small advantage, for the police had shown the foresight to quietly occupy several key locations in the city while everyone else fought. In the end, however, it was the MAF Commander who emerged victorious and was named the new President.