BCT (Brigade Combat Team) Command Kandahar is nearly a very good game, and I’m somewhat conflicted writing this review of it. While our playtest was a bit of a disappointment, with some tweaking it could be a very engaging and insightful representation of contemporary counterinsurgency operations.

What I liked most about BCT Command Kandahar were the staff cards that are at the heart of the game system. Each turn, players pick the joint military staff cards (J2 to J-9 in the US military staff system—J1 isn’t represented) for the next turn. Each card enables a number of certain functions, so that a J-2 (Intelligence) card can be used to identify covert enemy units or gain tactical advantage on the battlefield, a J-3 (Operations) card is necessary to undertake combat operations, and a J-9 card (Civil-Military Cooperation) card can allow you to develop local social infrastructure and build local networks of support. The number of cards in a player’s hand depends on their current command and control (C2) level, although this may be temporarily modified by planning (via a J-5 Planning card).

This means that, as in the real world, major military operations take some time to prepare, need to be based on a clear sense of operational and strategic purpose, and often take place in episodic bursts. This stands in contrast to many wargames, in which pretty much everything fights all the time, and where the game system gives little sense of operations planning. 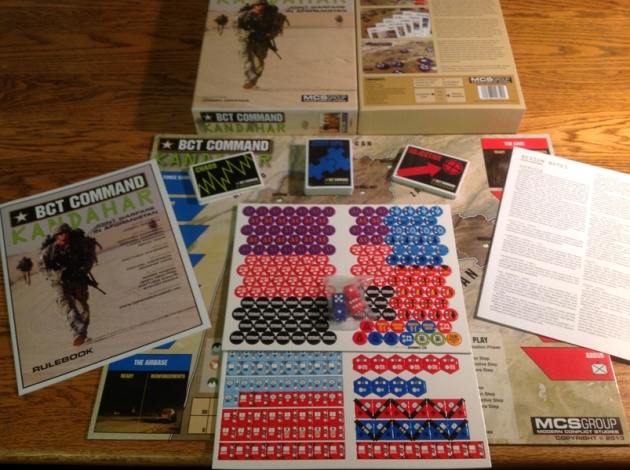 The Taliban player also uses staff cards. Although these often have different potential actions, they are similarly numbered using the US system. It would have been interesting had these been more  different. In many insurgent organizations, for example, bomb-making is a specialist staff function, as is the organization of high-profile terror attacks.

All of the Coalition tactical units depicted in the game are either generically Coalition or Afghan. This was perhaps another lost opportunity, in this case to depict the political and coordination dynamics of coalition warfare, especially given the sizeable Canadian contingent in Kandahar in 2005-10.

The game does a satisfactory job of depicting  non-kinetic operations, represented by the establishment of “SWET/NET” (sewage, water, electricity, trash + social networks)  across the Kandahar area of responsibility. In the game this is entirely done through military (CIMIC) actions, however. In real life, of course, the military is only a secondary or tertiary actor  in such efforts, which are largely undertaken by the local government, international organizations, NGOs, and local communities.

The objectives being pursued by the players are determined by objective cards, which change from turn to turn. While players have some control over which objective they are pursuing each turn, the system also provides a very real sense of shifting priorities set by higher command—in other words, the world as experienced by real brigade-level commanders.

“Chaos cards” introduce a random event each turn, although these tend to be rather generic. I might have preferred more detailed events that fully conveyed the “strategic corporal” effect of local actions having broader effect (or, conversely, national developments affecting local operations). However, this is largely a matter of taste, and it certainly doesn’t adversely affect game play. 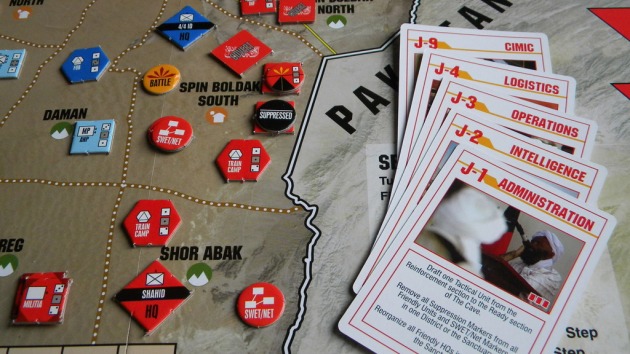 In our play-through of the “Intervention” scenario, the Taliban player initially placed covert guerrillas, recruiters, and logistics in Kandahar city itself, and then took advantage of having the  first turn to recruit large numbers of militia there (with seven such units recruited in the first turn alone). This immediately made any Coalition operations there very dangerous indeed, as well as creating a potential human-shield of low value units. Eventually the Coalition gave up on regaining control, and focused instead on the outlying rural districts.

This, of course, was a highly ahistorical outcome. At no point have the Taliban ever come anywhere near controlling Kandahar city. Instead, their activities there have largely consisted of symbolic attacks: even the so-called “Battle of Kandahar” in 2011 involved only a few score active Taliban attackers. In the real world, losing effective control of a city of half a million people would be a devastating blow. In the game, however, it is only marginally more important than other areas, and the Coalition can certainly win without it. A useful modification to the game would be to make the city both more important and a less hospitable environment for the Taliban.

Overall, I felt that the balance of forces in each district should probably have more effect on game play. Afghan insurgency and counterinsurgency has in large part been a dynamic of trying to influence fence-sitters who themselves are trying to best gauge which way the political and military winds are blowing. Guerrilla recruitment, training, and the building of training camps should be constrained by the degree of Coalition presence. Similarly, certain Coalition activities should become more difficult in areas with a substantial Taliban presence.

In combat, Taliban units always shoot first, unless the Coalition player has gained “tactical advantage” by playing J-2 (intelligence) cards. I’m not convinced, however, that in an era of UAVs and other persistent ISR assets that the balance of initiative always falls to the insurgents, especially in large-scale Taliban operations (most of which proved extremely costly to the attacker, and hence which were largely abandoned by 2006). This could easily be revised in the game by giving default initiative to the defender, or even introducing a level of uncertainty.

As might be expected, Coalition units in the game are significantly more effective in combat than are the Taliban. However, they are equally fragile, vulnerable to both suppression and even “destruction” (which, as the rules make clear, isn’t actual elimination, but rather a level of casualties that renders them temporarily combat ineffective). In Afghanistan, however, no battalion-sized US or NATO unit has ever been rendered combat ineffective for any length of time by Taliban attacks. A variant, therefore, might be to make NATO (but not Afghan) units largely invulnerable, but to somewhat increase the victory points earned from hitting them to reflect the political effects of US military casualties.

The combat system penalizes the Coalition player for using excess firepower, by counting excess hits against the enemy in urban or rural areas as collateral damage that earn the Taliban victory point. This is a clever mechanism, although it is perhaps too difficult to correctly judge how much force to use. It also makes it extremely difficult for the Coalition to combat Taliban units in Kandahar city, and renders it an effective Taliban base of operations—again, contrary to historical experience.

The rules are well-laid out, but in a few places could be clearer. It would also be useful if they were made available, in an updated edition, online. An FAQ/errata is available.