It has been a good week for McGill University gaming-related activities.

On Monday and Tuesday, I had a very enjoyable (and, I hope, very productive) couple of days at the International Foundation for Electoral Systems in Alexandria, VA. Much of the time we were discussing the ethics and crisis management simulations IFES is developing to bolster the capacity of election commissions, with the view that it is best to practice these sorts of issues in a safe-to-fail game environment. I also had time to make a more general presentation on the use of simulations and serious games (pdf here). They are a terrific group of skilled and dedicated folks at IFES, and kept me well supplied with coffee and sugary treats.  As you might expect, any place that names its conference rooms after the murder locations in the board game Clue is going to be simulation-and-gaming friendly.

Wednesday was my weekly conflict simulation design seminar at McGill. We discussed aspects of game design (drawing heavily upon Phil Sabin’s excellent book Simulating War), and the students provided an update on the three group projects they are working on:

We also heard a student presentation on gaming international humanitarian law. This largely looked at efforts by the International Committee of the Red Cross to promote greater IHL compliance in video games, including the partnership between ICRC and Bohemian Interactive which saw the release of IHL-themed downloadable content for the ARMA series of tactical first person shooters.

At the end of each seminar, we play a game (or at least part of one, since there is rarely time to finish). This week it was the 3 October 1993  “Lead the Way” scenario from Urban Operations, in which US Rangers and Delta Force personnel try to fight there way through hostile Somali militias to secure the crash site of Super 61 of “Blackhawk Down” fame. The game does a terrific job depicting urban terrain using a combination of hexes (for outside areas) and polygons (for buildings), which is why I had selected it as a demonstration game.

While all seemed to be going well at first for the Rangers, angry Somali crowds began to slow the Americans and growing numbers of Somalia National Alliance militia began to engage US forces. The Combat Search and Rescue team grimly held on at the crash site, using the helicopter wreckage to fortify their position as they drove back waves of attackers. Eventually they started to take casualties and run low on ammunition. Overhead, AH-6 Little Birds provided much-needed fire support, but found it increasingly difficult to get a clear shot at gunmen as the streets grew more crowded with angry local residents. Finally, Somali forces closed in on the Rangers from the west, and a lucky RPG shot took down one American platoon commander and forced the rest of his unit to take cover well short of Super 61.

The Rangers advance towards the crash site, harassed by angry crowds and SNA gunmen. Minutes later, however, additional militia reinforcements would arrive from the west (left), engaging the rear of the American force.

This week we also finished the annual McGill AFTERSHOCK: A Humanitarian Crisis Game tournament. This was a optional activity for students in my POLI 450 (Peacebuilding) course, and 28 of them chose to take part as one of four teams. There are class participation bonuses for taking part, for being part of the highest-scoring winning game, and for being a member of the highest scoring individual team. In order to provide a similar level of challenge, and also to optimize teachable moments, the Event deck was prepared before each game to present an identical sequence of challenges and opportunities for each group.

The results of the 2018 McGill AFTERSHOCK tournament.

This year, two of the games were wins, one was a narrow loss, and other was a more substantial loss. This is the third year I’ve run the game for the class–you’ll find last year’s results here.

This year’s winning team at work in the 2018 McGill AFTERSHOCK tournament.

Finally, we’ve sold most of the tickets for the DIRE STRAITS megagame at McGill on February 25 (although there are still some available, if you’re interested). The scenario video for the game was posted earlier today here on PAXsims.

Urban Operations, as its name suggests, is a wargame that explores modern company-sized infantry and combined operations in urban terrain. While published by a commercial wargame publisher for the wargame hobby market, it is also rather more than this. The designer, Lieutenant-Colonel Sébastien de Peyret, has served at the French military academy at St. Cyr (École Spéciale Militaire de Saint-Cyr), at the French Army’s urban warfare training centre (Centre d’entrainement aux actions en zone urbaine) and the Centre for Force Employment Doctrine (Centre de doctrine d’emploi des forces). He designed Urban Operations to have a potential educational and training function too.

There is much to like in this game. The components are of extremely high quality. The two two-sided maps can be used to depict a variety of urban terrains, and the system of sight-lines and elevations used in the game system recreate those issues of cover, visibility, dead ground, and kill zones that are all so critical to urban combat. The game contains a large number of scenarios, which can be linked as campaigns: Fulda 1985 (a fictional Warsaw Pact invasion of Germany), Mogadishu 1993 (Operation Restore Hope, including the crash and rescue of Super 61/”Blackhawk Down”), and Four Aces (a collection of conflicts: Kolwezi 1978, Grozny 1999, Basrah 2003, and Fallujah 2004). 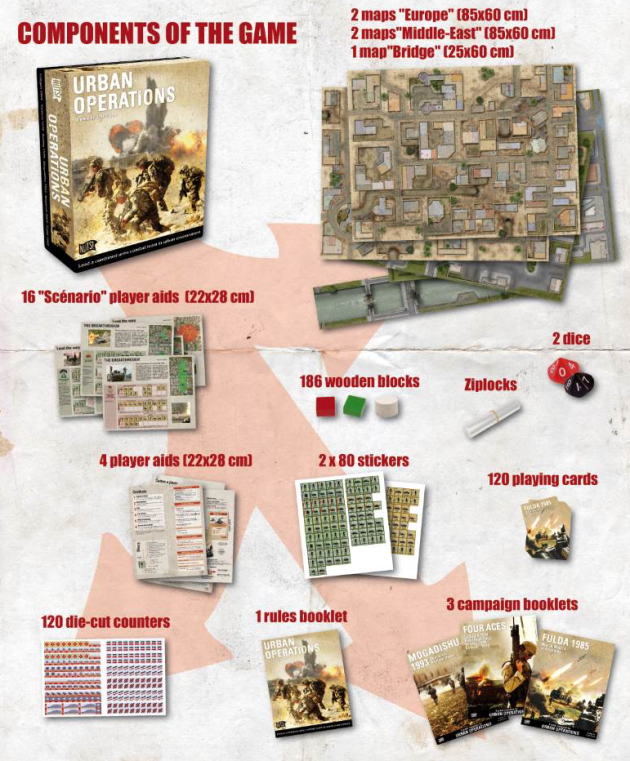 The game system uses blocks to provide for fog of war, whereby the opposing sides units cannot be identified until they fire or are spotted. Dummy blocks add to the uncertainty. Each block depicts a fire team, similar-sized support element, commander, or single vehicle. Information cards indicate the capabilities of various national units, including any special rules. Movement is determined by movement points and terrain values on a hybrid map, with hexes for most areas and zones/rooms for interior movement within buildings. Additional rules provide for higher elevations on roof tops, as well as subterranean movement and fighting in tunnels and sewers. Combat is conducted by comparing firepower factors, so that all firefights become duels of a sort, unless a unit chooses to withdraw. Dice provide some variability, as well as the possibility of critical hits.

The game system combines casualties, morale, and supply into a single system of operational effectiveness. Support units can recover lost operational strength levels (by providing ammunition, first aid, and so forth). Leaders matter, and the clever system of “effect points” used to measure ranges means that command distances are adversely affected by barriers such as walls.

Having played through Kolwezi 1978 scenario (with French paratroops of the 2e REP intervening to rescue European hostages and support Zairian dictator Mobutu Sese Seko against Katangan rebels), I found game play to be smooth and fairly intuitive. The rules could perhaps be a little better written or organized in places. While this is only a medium complexity wargame, wargaming neophytes would find it a bit of a challenge to just pick up and play. 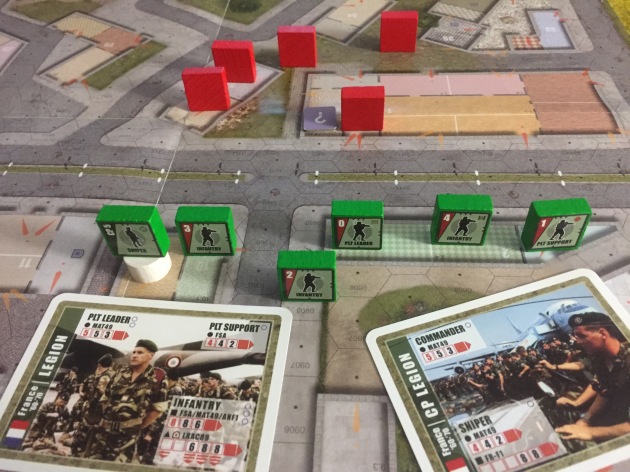 Members of 3rd Company, 2e REP advance into contact with members of the Front National de Libération du Congo as a sniper provides overwatch from the rooftop. A possible hostage location (marked with a “?”) can be seen in the building across the street.

In terms of the design, it is clear a lot of effort has gone into representing the particular characteristics of modern warfare. Many anti-tank weapons, for example, have back-blast effects that make it impractical to use them within buildings. Mines and IEDs can be employed. Units can create breaches to enter buildings or to provide firing points, although only in certain pre-designated locations. There is even a rule for using the shelter of moving tanks or other armoured vehicles for temporary cover, or climbing onto the roof of a building via the top of a nearby vehicle.

Perhaps most significant at all, the rules address issues of friendly fire and collateral damage in detail. Friendlies in the line of fire stand a good chance of being hit, and you had best remember why short-ranged ambushes are usually L-shaped or linear if you don’t want to kill your own side. Civilians are present on the battlefield, and will respond to events—and die if caught up in the fighting.

The game includes rules for air and artillery support, as well as for anti-aircraft defences. You can even use your ZSU-23-4s in an anti-infantry role in the streets of Grozny, if you wish.

For me the jury is still out on the wisdom of combining so many components of combat performance (casualties, morale, supply) into a single operational effectiveness measure. This is especially true with regard to casualties, given the emphasis placed by many modern combatants on stabilizing the wounded and evacuating them to safety. The rules also create a gain in operational effectiveness each time a unit eliminates another—while this is intended to represent positive morale effects, it sometimes seems as if troops are essentially regenerating previous “damage” by killing stuff. On the plus side, combining these things into a single measure does speed game play, and also underscores that there is a great deal more to unit effectiveness than physical losses alone.

There are a few other tweaks I would have made to the system. For a start, units fight back with their full firepower factors no matter how many times they are attacked, and no matter from how many angles they are fired upon. It might be reasonable to apply a penalty to defensive/return fire when the same unit is attacked from a second or subsequent direction in the same turn—after all, not everyone can be facing everywhere at the same time.  Troop quality affects how easily you lose of operational effectiveness (reflecting the impact of quality on both morale and the use of cover), but has only modest effects on hitting them to begin with. The opportunity fire rules treat any exposed movement as similar, creating little incentive to dash across the street where it is narrow rather than stroll down the middle. I would have liked to have seen far more dummy counters used to simulate the fog of urban war.

There are no rules for multi-story buildings in the rules, nor for building quality (although buildings can be upgraded to fortified). Perhaps my biggest concern was the very limited fire arcs from most buildings. I suspect only a few “apertures” were provided per building to force players to think about line-of-sight and firing arcs, and to encourage them to choose their urban terrain and approaches carefully. On the other hand, in many places buildings typically have multiple windows on all sides. Perhaps this aspect of the design might have been intended to represent the vision-limiting effects of ground-level clutter: vehicles, signs, rubble, and so forth.

Kolwezi today—and look at all those windows.  (Photo credit here.)

Overall, Urban Operations is a very solid effort at modelling a complex, three-dimensional form of combat in a playable way. The relative simplicity of the game system makes it relatively easy to modify, too—and the special rules for the various scenarios and campaigns demonstrate how this can be done.

Indeed, I’m considering using a modified version of the game to highlight the challenges of protecting urban religious and cultural properties during wartime at a workshop next year. If so, I’ll let you know how it goes!