Recent years have seen an effort to (re)introduce a greater quantity and quality of wargaming into professional military education, notably in the United States and United Kingdom. This volume contains a number of British examples. It is written by two well-known experts in the field, John Curry (of the History of Wargaming Project) and the prolific but ever-elusive “Tim Price” (a currently-serving British military officer). Another British officer, Ed Farren, has also contributed to the collection. The book is amply illustrated with maps and pictures, and additional materials are available for download at the History of Wargaming Project website.

The book contains four wargames. The first, the Sandhurst Kriegsspiel, is a platoon- or company-level action meant to be played following a TEWT (tactical exercise without troops) earlier in the day. During the TEWT, officer cadets physically visit the nearby “battlefield” and ascertain how they might defend or assault a designated position. During the kriegsspiel, they then play this out against each other on a map using simple wargaming rules. The authors note one absolutely key point that underscores the value of wargames as an educational, training, and planning tool, namely what a fundamental difference it can make when one introduces an intelligent and adaptive adversary into the process:

Experience running these kriegsspiels shloes that BLUE often change their plan for the wargame from the one they have spent the majority of the day considering in the TEWT. When faced by an enemy played by their peers, who have spent the day considering the same situation, the players often realise that they have assumed that the enemy is stupid [and] incapable of thinking from the BLUE point of view. The RED team will know what the likely BLUE attack plan will be and have prepared for it.

The second game included in the collection is the Battlegroup Kriegsspiel, which introduces a simple map-based wargame involving multiple platoons and companies. The Modern Infantry Battle (or “Future UK Army Concepts”) wargame was developed to explore the implications of possible reorganization and reductions in the size of British infantry companies. This is somewhat more dependent on formal rules, and less dependent on umpire adjudication. Finally, Ed Farren’s Counter-IED Kriegsspiel has students play the role of a Blue force attempting to complete an assigned task—and a Red force placing IEDs and ambushes to try to prevent this and inflict casualties. All of these games are quite simple, but in many ways that is the point: even relatively quick and simple wargames can provide insight into military operations in a way that explores their inherently adversarial nature.

The many appendices to the volume include a summary of the UK military decision-making (or combat estimative) process; a (rather critical) British military assessment of the SPI commercial wargame Firefight (1977), notes on British Army weapons, and sample unit counters for the games.

The primary targets of this book are those engaged in tactical and operational military training. However those interested in teaching military operations in other contexts (including in university courses on modern warfare, which are often peculiarly devoid of any exploration of the tactical, operational, and strategic arts) will also find it useful. Hobby gamers may also derive from enjoyment in trying out the rules and scenarios with their opponents, in a “can you beat a Sandhurst officer cadet” sort of way. 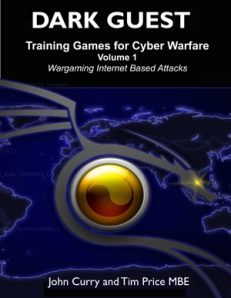 This booklet is intended as a guide and aid for those involved in promoting broader awareness of “cyber warfare” and information security within their organizations. It consists of a discussion of the challenges of training on the issue, and overview of cyberwargaming, and a brief discussion of the rise of hacking and hactivism. Thereafter, it presents five games that can be used (or modified) in a training context:

The games are not technical ones. Indeed, experts in cybercrime, warfare, and hacktivism may find the lack of technical detail and analysis in this volume surprising.

If so, they would be missing the point. Dark Guest is intended to provide resources for those who have the task of spreading awareness of cyberwarfare issues within larger organizations, possibly inspiring them to modify the sample games provided or develop their own for their own particular needs. The games are thus designed to encourage non-IT specialists and managers to think about potential vulnerabilities (although some might also encourage IT specialists to go beyond issues of hardware and software to reflect on more general questions of policy, strategy, and context). All of the games are relatively free-form, and most are rather abstract. They are thus highly adaptable and designed to promote discussion-through-play. Most can also be played quite quickly, making them very suitable as ice-breakers or to provide a change-of-pace as part of a broader training programme. A previous edition of Dark Guest included a full rules-based card game on cyberwarfare, which has been dropped in this edition precisely because the authors feel that a book containing “generic ideas… [with] wider application” would be more useful for those seeking to integrate serious games into their training process.

One key aspect that the authors note, but could do more to address, is the fundamental importance of effective game facilitation and umpiring in free-form games such as these. Considerable skill is required to do this, since the moderator simultaneously needs to run the game, adjudicate actions (in a way that participants find convincing), maintain player engagement, deal with less cooperative players or those “fighting the scenario,” while all the time exploiting the teachable moments that the game generates. Experienced teachers may have some of these skills, and experienced role-playing-game “dungeon masters” have others—but not all neophytes have all of them. Given that this is volume 1 in what promise to be a continuing series—and given its association with the longstanding History of Wargaming research and publication project—this may well be an aspect that the authors turn to in a subsequent volume.