Some recent items on conflict simulation and serious (and not-so-serious) gaming that may be of interest to PAXsims readers. Christian Palmer assisted with this latest edition.

A recent article in the Harvard Business Review suggests “Games Can Make You a Better Strategist.”

Play has long infused the language of business: we talk of players, moves, end games, play books and so on. And now we hear often about the “gamification” of work—using elements of competition, feedback and point scoring to better engage employees and even track performance. Even so, actual games are still taboo in most organizations—the stereotype of the work-avoiding employee cracking new high scores in Minesweeper has given gaming a bad name. And the corporate executive playing games to improve his or her strategy-making skills is still rare. This is unfortunate. We think that games have an important place in cultivating good strategists, and that now more than ever games can give executives an edge over their competition.

Further evidence that board games are (re)entering the cultural mainstream: The Independent features an article on the classic game Diplomacy.

Diplomacy is a board game in which players compete to achieve world domination, taking on the role of various countries in the lead-up to the First World War. The board is a map of Europe; each player (England, France, Germany, Austria-Hungary, Italy, Turkey, and Russia) starts off with a certain number of territories, or supply centres, and the winner is the first to expand to 18. It’s a game of intrigue and aggression, which has achieved cult status, complete with tournaments, postal games and dedicated webzines. Henry Kissinger apparently used to play it as practise for the real thing and, inverting this, I’ve started paying more attention to real life diplomatic flashpoints – the negotiations over a Greek bailout, say.

A distinctive feature of the game, as conceived by its creator, Allan B Calhamer – a Harvard educated postman – is that there is no element of chance. Unlike with Risk, there are no dice; an attack succeeds based solely on whether the units attacking a territory outnumber those defending it. Because you are simultaneously trying to expand into other players’ territories and defend your own, you need to strike deals with your fellow Great Powers….

Earlier this month, the Three Moves Ahead podcast featured an interview with game designer Brian Train:

September 3, 2015 This week Bruce sits down with prolific game designer Brian Train. Brian’s games span a wide range of conflicts and scenarios, including Greek civil war, fighting in Algeria, and Special Forces actions in Vietnam. His predilection for asymmetric warfare and non-traditional combat modeling have brought his games to the attention of US military simulation experts and wargame fans throughout the world. 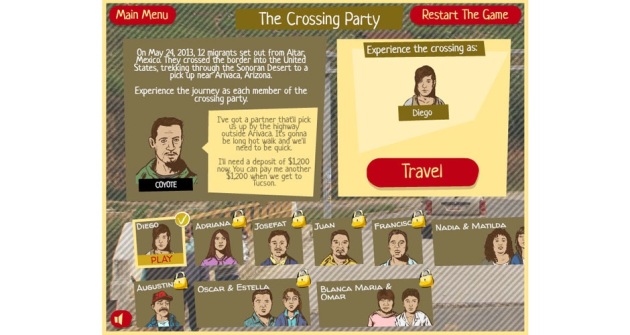 Although the game isn’t new—it was first released in 2014—all the current attention to illegal immigration in the current US Republican primary race makes this an apt time to mention The Migrant Trail.

“THE MIGRANT TRAIL  presents a first-person journey through Arizona’s desert borderlands.  Play as  an undocumented immigrant attempting to cross the Arizona desert and/or a border patrol agent attempting to secure the border.  Playing the game offers an alternative  platform to further engage conversation, investigation and inquiry, into the themes and questions raised by the documentary.Migrant Mode Intro

Every year an unknown number of migrants cross through the harsh Sonoran desert from Mexico into Arizona.   They pay $1500-$2500 to join a crossing party, that is led by for hire guides referred to as Coyotes.   If one cannot keep up, twists ankle or runs out of water, he or she is left behind and many die.  On average, the remains of 200 dead migrants are found each year.  It’s not known how many are never found.Border Patrol Mode Intro

Every day U.S. Border Patrol agents patrol the Sonoran Desert along the Arizona-Mexico border. Their job is to apprehend undocumented border crossers, provide first aid to the injured, and locate the remains of dead migrants.

The game was produced to accompany release of the film The Undocumented.

The (Minneapolis) Star Tribune features a report on a recent humanitarian crisis simulation conducted by the University of Minnesota:

The refugee camp that sprung up in Minnesota last weekend was much like others in conflicts across the globe. Exhausted refugees cried out for food. Camp doctors struggled to aid the sick. Soldiers toting M16s tried to keep peace.

But this camp had one big difference. The roughly 170 people in its drama were volunteer actors in an elaborate “humanitarian crisis simulation” that sprawled across woods and fields at a Boy Scout camp near Cannon Falls, Minn. It is a weekend class offered by the University of Minnesota, with help from a half-dozen nonprofit organizations and the Minnesota National Guard — whose soldiers act as not-so-friendly foreign government troops.

One of a handful of such hands-on training camps in the nation, it is designed to give individuals considering humanitarian aid work a realistic look at the complexities ahead. Given the migrant and refugee crisis exploding in Europe, it is timely instruction.

The American Political Science Association has issued a call for papers for its 2016 Teaching and Learning Conference, to be held in Portland OR on February 12-14. Submissions are due by September 25.

The theme for the 13th Annual APSA Teaching and Learning Conference is, “Rethinking the Way We Teach: High-Impact Methods in the Classroom,” which focuses on gaining a greater understanding of high-impact practices and innovative methodologies in the political science classroom. Panels and workshops will offer a forum to share pedagogical techniques and discuss trends in political science education.

As in the past, simulations and games will be among the main conference tracks:

Simulations and games can immerse students in an environment that enables them to experience the decision-making processes of real-world political actors. Examples include in-person and online role-play scenarios like the Model European Union and ICONS, off-the-shelf board games, Reacting to the Past, and exercises that model subjects like poverty, institutions of government, and ethnic conflict. Papers in this track will examine topics such as the effects of gamification of course content on student motivation and engagement, cognitive and affective outcomes from simulations and games in comparison to other teaching techniques, and the contexts in which the use of simulations and games makes sense for the instructor.