Wasser: I Run War Games. Too Often, I Am the Only Woman in the Room.

In today’s New York Times Magazine, Becca Wasser (RAND) discusses the endemic underrepresentation—and even marginalization—of women in professional wargaming. It’ is an outstanding piece, and should be considered a must-read for anyone involved in the national security or serious gaming fields.

As a game designer and facilitator, I have to create a believable environment and tell a compelling story that makes the players — usually United States military and government officials — take the game seriously, believe that their decisions have repercussions and play hard so that the results simulate the real world. I need to take a problem, boil it down to the basics and identify the details that really matter while still leaving enough color to make it interesting…. Too many options make the game ponderously slow, with players never getting a chance to see the results of their decisions; too few choices mean that I have potentially predetermined the game’s outcomes.

But there is something else dictating the available choices in war gaming, and that is a lack of gender diversity. War gaming — as with war more generally — has long been a male domain and has significant barriers to entry, retention and advancement. You can’t learn by reading; you have to learn by doing. Many women — myself included — find themselves doing managerial or administrative work for games in a bid to break into the field and learn about war game design and execution, but they often find themselves stuck in that track. I didn’t grow up playing Axis & Allies or memorizing all the fighter aircraft flown by the United States Air Force, like some of my male colleagues did. These are the sorts of things that started me at a disadvantage. Everything about war gaming and military operations more broadly I have learned as an adult, from scratch, whereas most of my male counterparts have been inadvertently training for this job since they were children. Even now, 10 years into my career, I am still playing catch up. This sense of disadvantage tends to discourage women from joining war gaming teams — let alone the national-security field — because many feel that there is not a clear substantive role for them to play or a path to advancement.

The unspoken gender divide that exists in the war gaming field comes out in funny ways. I know that when people arrive at most of my games, they don’t expect me to stand up and run the game, or to play judge, jury and executioner in deciding combat outcomes. I’m expected to be the note taker or the event coordinator. The number of times I have been asked where coffee is and whether I could fetch it is staggering. I will admit that there is something empowering about being able to command a room and prove my audience wrong. But the thing is, I’m tired of being a rarity. I don’t want to be the only woman in the room running a war game.

I’ve seen subtle but important differences emerge from games led by women or involving women in the design process. For a game exploring future technology, my male colleagues created a list of military capabilities — the order of battle — that focused heavily on systems that could be used to attack and destroy targets. In contrast, an order of battle created by women included more systems — like reconnaissance platforms — that provided better tools to more quickly alert war fighters of adversary activities and locations. This eye toward inclusivity can also be seen when women run games, as female facilitators are more inclined to encourage different voices to contribute to discussion and in turn gain a greater range of insights into the particular problem at hand. It is not so much that female war gamers approach the critical problems differently or focus a game on “soft” security issues like gender and humanitarian affairs. Rather, they are likely to have different perspectives, based in part on their experiences navigating a man’s world. By not having female game designers, facilitators or players, opportunities to uncover new and innovative strategies are falling by the wayside.

The article also discusses the work of Girl Security, the Leadership Council for Women in National Security and NatSec Girl Squad to address these issues, including the Korea wargame that Wasser and her colleagues at RAND recently conducted for female high school students.

The reactions to this @NYTimesAtWar piece—my personal story of trying to navigate a male dominated field—have been overwhelming. It was scary to be this honest, but hearing from folks about how it resonated with them has reminded me why I wrote it.

ICYMI, please have a read. https://t.co/kw4RxKaPn5

At the various Connections professional wargaming conferences only 5-10% of panelists are typically female, and about 15% of participants. In hobby wargaming, the proportions are markedly lower and the problem even more severe. In some surveys, only 1-2% or so of hobby wargamers identify as female.

At Connections North last year, 25% of our participants were women—probably because the event is held on campus, and significant numbers of students attended. The social and other barriers to entry to wargaming certainly seems to be lower at universities than in the national security field, with women making up almost half (19/40) students registered in my POLI 452 conflict simulation course next term. It probably also reflects the larger proportion of women in social sciences fields in general, as well as students whose interests are more focused serious games more broadly.

For other resources on gender and other diversity issues in (professional) wargaming, see these previous PAXsims reports:

It’s finally here! With the generous support of the National Defense University Foundation, we are pleased to announce the release of AFTERSHOCK game expansion #1 on the gender dimensions of humanitarian assistance and disaster relief operations.

We’ve previously discussed the development and playtesting of the expansion set here at PAXsims. For those of you don’t know about AFTERSHOCK: A Humanitarian Crisis Game, you’ll find additional details here. A free copy of the expansion set rules is available from The Game Crafter website, as are the rules for the main game. 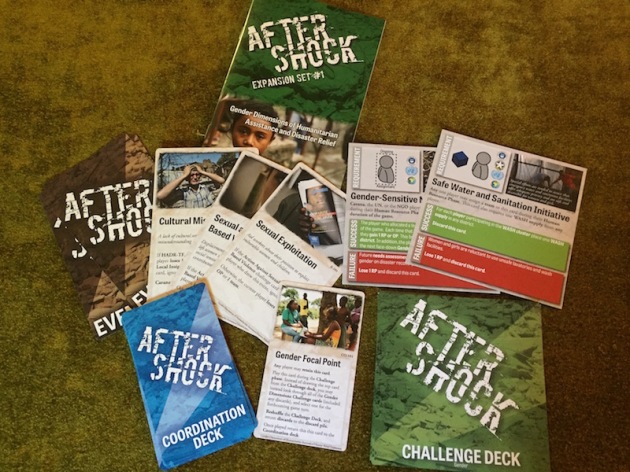 The game expansion is priced at USD$14.99. To make it more accessible we are also permanently reducing the price of AFTERSHOCK to USD$84.99. Now there’s absolutely no excuse not to buy both—and thereby incorporate gender analysis into your efforts to provide urgent humanitarian assistance to the desperate, earthquake-afflicted people of Carana!

All net proceeds from the sale of AFTERSHOCK and its expansions are donated to United Nations humanitarian agencies. Order a copy now!

From time to time I’ve had several anecdotal discussions with both students and colleagues about the ways in which participation in classroom simulations might be affected by gender. In my annual classroom civil war simulation we once asked an array of pre- and post-simulation questions designed to measure self-reported learning outcomes, and found no significant gender-based differences. I’ve also collectively asked the class  whether they think gender shaped participant behaviour. Both men and women tend to split 50/50 on the issue, with around half saying there are significant gender-based differences in simulation styles and participation, and about half disagreeing. I really should study it more systematically in the future.

A new article in the Journal of Political Science Education 9, 3 (2013) by Richard Coughlin on “Gender and Negotiation in Model UN Role-Playing Simulations” does just that. His finding are as follows:

This article reports on the relationship between gender and participation at the 2010 Southwest Florida Model United Nations (SWFLMUN). Three major findings emerge from this research: (1) Even though more females participated in the SWFLMUN than males, males accounted for most of the speeches and played more decisive roles in the formulation of the committee resolutions; (2) male and female delegates employed similar negotiating styles; and (3) surveys administered to delegates suggest that males and females derived about the same amount of satisfaction from the conference but that males, paradoxically, were more likely to report barriers to participation than females. These results leave the impression that gender is a significant, but unremarked factor in shaping participation. These findings are discussed with respect to a normative conception of Model UN (MUN) as a mode of global citizenship. MUN is designed to overcome national ethnocentrism by affirming the existence of multiple perspectives on world issues and by establishing a deliberative process through which these different interests and perspectives can be negotiated. The results of this research, however, suggest that gender stereotypes may alter the kind of political socialization that is both expressed and reproduced through MUN. Substantive inequalities associated with these stereotypes may be infecting formally inclusive public spheres—such as MUN—with the effect of coding politics as a competitive, male domain.