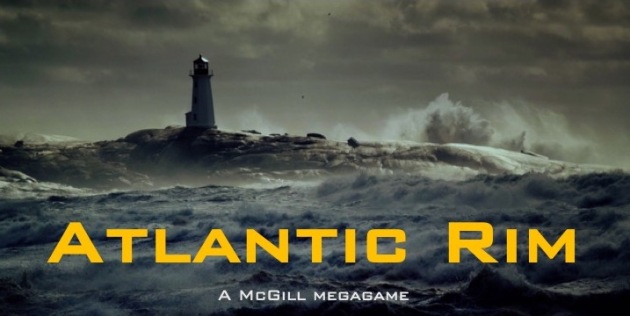 Registration is now open for the 2020 McGill megagame—ATLANTIC RIM.

A mysterious meteor shower has struck the Atlantic coast of North America. Many coastal communities, including parts of Nova Scotia and Newfoundland, have been devastated by the resulting tsunami.

Police, fire departments, medical services, municipal workers, public utilities, Canadian Armed Forces personnel, and the Coast Guard are mobilizing to address the emergency. Roads are damaged. The electrical grid has been shattered. Hospitals are overwhelmed. Survivors are fleeing to safety.

Can local, provincial, and federal officials pull together to coordinate an effective response?

Will Atlantic Canada rise to the challenge?

…and are they prepared for the deadly peril that might now be lurking offshore?

ATLANTIC RIM will take place at McGill University in Montréal on Sunday, 16 February 2020. Further information and tickets can be obtained via Eventbrite (and they’re cheaper if you register before January 1!)

Registration is now open for the CONNECTIONS NORTH professional wargaming/conflict simulation/serious gaming conference, to be held at McGill University in Montréal on Saturday, 15 February 2020.

For details of past conferences, see these reports.

CONNECTIONS NORTH is proud to be part of the international network of Connections interdisciplinary wargaming conferences.

Gaming tensions in the Gulf—in the classroom

Antoine Bourguilleau, a lecturer at Paris I Pantheon-Sorbonne University, has kindly provided this report on a recent session of the Horrible, One-Sided Deal matrix game.

A session of A Horrible One Sided Deal Matrix Game, was organized last September at the ILERI International Relations school in La Defense, near Paris. The twenty students were unaware that they were going to participate in a serious game session and none of them had any experience or knowledge in manual wargaming in general or in matrix games in particular. We (Antoine Debarbouillé from Pytharec and I) took 15 minutes to explain the basics of a matrix game and the subject of the exercise.

A Horrible One Sided deal provides for five teams, so the students were grouped into teams of four and were asked to read carefully the briefings of their respective actors (Saudi Arabia, Russia, USA, Iran and the EU) and try to define a long term objective and some short term objectives. They were also asked to prepare their arguments for the first turn. The Iranians were informed that they could make use of proxies (The Houthis in Yemen and various Shi’ite militias in Syria/Iraq/Lebanon) as a “bonus” and the Saudis that they could also use UAE/Oman, Bahrein, and Israel, the later two with the formal agreement of the US players.

Twenty minutes later, the Iranians began their first turn by stating they were going to shut down internet in their country for fear of a cyber-attack. Most other actors just made some declaration of intention about the necessity of keeping the area peaceful. On the next move, nothing really happened except for the Russians and the Saudis who also decided to shut down/monitor more closely their communication networks; the Iranian team asked for a conference to bring the USA back into the nuclear deal, without any reaction from Washington. As things were rather idle, the facilitators decided to announce that an explosion of an unknown nature had stricken an oil facility in Saudi Arabia. Most teams thought the announce was in fact a covert action by the Iranians (who themselves thought it was a US “false flag”), and the two main actors of the area decided to opt for some troops redeployments, mainly as a show of muscle. This sparked a rise in oil prices. The EU chose to ask for multilateral talks, the US did nothing except ostensibly refuse to have serious talks with the Saudis between turns, which led the later to ask themselves what they could do to get some support from their main ally. The Russians unilaterally decided to lower their gas and oil prices, to relieve a bit of tension.

Then the Saudis opted for an all-out offensive in Yemen, much to the consternation of their American allies, who chose not to interfere. The Iranians, infuriated by this move send an ultimatum to the Saudis, stating they would not tolerate this offensive and asked for the Saudis to stop it immediately and leave Yemen, otherwise Iran would use any means necessary to make it stop. Once again Washington chose not to state precisely what they were up to but proposed some help to the Kurds in order to be a sting in the back of the Iranian-backed Shi-ite militias. The EU decided to move their combined fleet near the coasts of Yemen as a possible buffer force if the fighting were to stop, and the Russians chose to deploy part of their own warships in the Indian Ocean to the straits of Hormuz as a show of force.

The Saudis refusing the Iranian demands, the Houthis intensified their attacks and some Iranian proxis crossed the border of Saudi Arabia from Iraq. The US troops in Kuwait did nothing to prevent this, much to the furor of the Saudis. Things were escalading quickly, Iranian armor was crossing the border into Iraq, the situation was absolutely out of control and the facilitators chose to stop things here to have a post mortem with the participants.

All in all it was an interesting sessions for many reasons.

First, if the Iranians and the Russians had rather clear views on their objectives and stuck to their respective strategies, the Saudis were too much hesitant as were the US team. The EU team seemed to consider the game as a roleplaying game and was quite content to endlessly talk about “commissions”, “talks”, “deliberation” and “interposition” without acting. It may be that the EU has this tendency, but the aim of the game was precisely to try to see what the EU could do if it wanted to act and, on this particular point, the exercise was partially a failure – but things showed that the EU has for the moment very few viable options. In comparison, the Russian team was not “Putinesque” in its behavior and was able to protect its interests and be resolved without being overly aggressive.

Second, the situation clearly escalated because the US were not firm enough in their actions and signals send to all the other actors; the Saudis felt betrayed and the Iranians considered they had an opportunity to act and “settle things” once for all with their neighbors. After discussing this matter with the US team, it appeared they had based their thinking on the rather strange idea that “The US want the Middle East to be stable, but not that stable, to carry on being a crucial actor in that part of the globe”, an assumption that had terrible consequences: The US team was quite happy to let the situation escalate but were then absolutely at loss on what to do next, when their first logical move should have been to state that they were going to use force should the Iranians attack Saudi Arabia – and to restrain the KSA on acting too rashly in Yemen.

Third, an interesting dialogue took place between the KSA team and the facilitators when the Russians decided to move their fleet near the Strait of Hormuz: “The Russian would never do that” said one member of the KSA team. The facilitators had to remind her that the object of such a game was not to find if one actor or another “would do” something but rather on whether it can do it – and what happens if it does. The game really had an impact in showing that a policy is based on assumptions sometimes ruined by new developments and that IR is precisely about “what to do when conditions change,”a mental exercise most students are not familiar with.

Fourth, the Iranian team insisted on conducting and offensive in Saudi Arabia, considering they had good chances to create havoc in the South. The facilitator (myself) expressed doubts on the matter. The events of late September, when Houthis were able to ambush Saudi armoured vehicles look like a validation of the students’ point of view!

Fifth, lots of information circulated around the room during the arguments. All the teams were able to provide for pros and cons on the actions of other actors. The facilitators learned lots of things about Middle East politics too.

The Project on Nuclear Gaming (PoNG)—a research project that is “aimed at understanding the impact of emerging technologies on strategic stability and nuclear risk reduction”—hopes to convene the largest online wargaming event ever on Tuesday, November 12.

The Project on Nuclear Gaming (PoNG) is organizing an online playfest for our first game, SIGNAL, a video game focused on understanding the issues surrounding nuclear deterrence and strategic stability. Thousands have signed up to play SIGNAL since our public launch in May 2019 and our experimental wargaming concept has been featured in the Bulletin of the Atomic Scientists and Science. Now we want to elevate the wargaming community with your help.

On Tuesday, November 12, we’ll be hosting a SIGNAL online play festival to bring together as many people as possible for the largest online wargaming event ever conducted. Players can join in online beginning at 6p ET/ 3p PT at https://pong.berkeley.edu/signal/ to vie with students, policy scholars, military experts, and anyone with an interest in the art and science of wargaming.