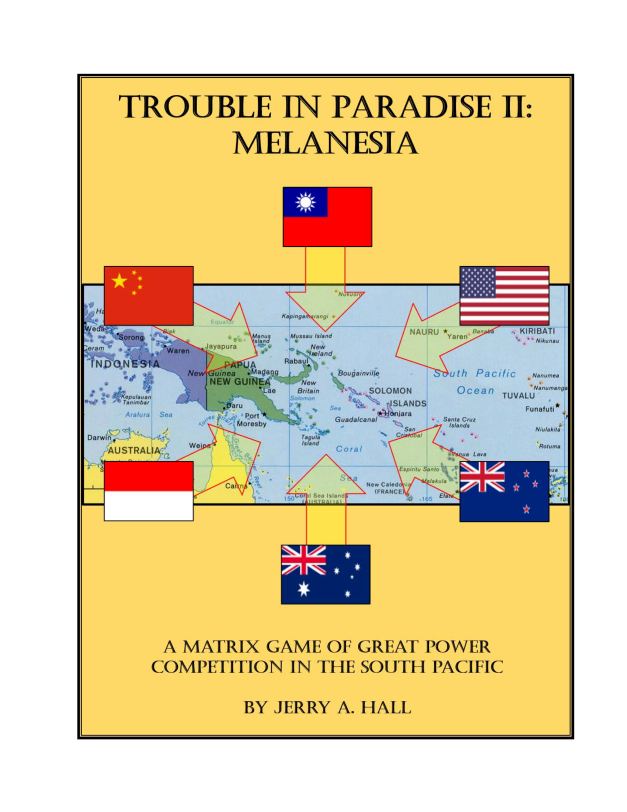 Melanesia is a Matrix Game designed to introduce players to the Melanesia region, its major actors and its most important dynamics. It is the second title in a series of Matrix Games on Oceania using the same core rules as the previous title, Micronesia. An overview of the Melanesia region follows in the next section (references to the game Melanesia will be italicized).

The major actors represented in the game (either as player countries or through game design) are the Melanesian minor powers: the Autonomous Region of Bougainville, Fiji, New Caledonia, Papua New Guinea (PNG), the Solomon Islands, Vanuatu, and West Papua; and the major regional powers: Australia, China, Indonesia, New Zealand, Taiwan, and the United States.

The most important dynamic represented in the game is great and regional power influence competition at several levels. At the grand strategic level the United States and China are competing in the Oceania region in what some have called another “Great Game.” In the case of Melanesia, this competition is fueled by Melanesia’s strategic geographic location at the southern base of the “second island chain,” Melanesia’s raw materials and potential markets, China’s ever expanding Belt and Road project, and the United States’ slow “rebalance” to the Pacific. There are several competitions at the regional level. China and Taiwan are competing over recognition; the Solomon Islands still recognizes Taiwan over China (as do five other countries in Oceania: Kiribati, the Marshall Islands, Nauru, Palau, and Tuvalu). Australia is the largest aid donor in the region. Both Australia and New Zealand have historic and cultural ties to Melanesia and vested interests in Melanesian security. Indonesia is attempting to influence the Melanesian countries to minimize support for the Free Papua movement in the Indonesian province of West Papua. The Melanesian countries have their own internal issues that reduce their agency as the great powers compete over and in them. A final wildcard is the separatist movement in the Papua New Guinean Autonomous Region of Bougainville; Bougainville independence could trigger similar movements in its neighbors.

Influence is represented by markers placed on the map for each country and Bougainville; each country has a graphic divided into sectors representing the Government, the People, the Economy and any Government Opposition. Players gain or lose influence markers during the game through their actions; either limited recurring actions (“Turn 0” activities), or discrete and more powerful actions using of the Instruments of National Power (Diplomatic, Information, Military and Economic, or “DIME”).

Melanesia introduces two important influence concepts, one grounded the in the core influence dynamic included in Micronesia, the other a new twist: the West Papuan separatist movement and the concept of “Melanesian Solidarity.” The Indonesian region of West Papua is represented as a non-player actor in Melanesia. The Indonesian player may take actions in West Papua (and has DIME Tokens that can only be used there). The separatist movement is represented by the Subject Matter Expert (SME). “Melanesian Solidarity” represents the concept of a Melanesian community that transcends national borders, especially support for West Papuan self-determination or independence. Melanesian Influence Markers throughout the region reflect the level of support for Melanesian culture and independence, most prominently in support of West Papuan independence. See the Indonesian and West Papua briefs, as well as Appendix 4: West Papua Independence Movement, for additional information.

You’ll find everything you need to run the game here.

One response to “Trouble in Paradise II: Melanesia”