Today I had an opportunity to playtest a beta version of Viva la Revolution, a simple but enjoyable and effective counterinsurgency board game being developed by Ed Farren. As the screenshots will reveal, the game was played via Table Top Simulator (Steam)—necessary since I’m in Montreal, while Ed is currently deployed to Kabul. 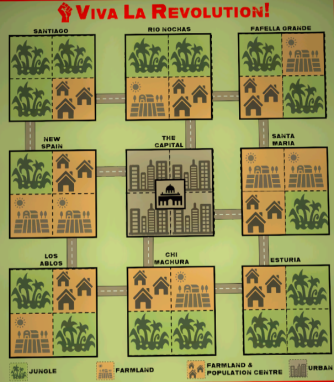 The game depicts a fictional Latin American country, pitting the government against rebel forces. The map depicts one central capital city, and eight outlying regions. The territory of the latter consists of small towns, farmland, and dense jungle. The game metrics track four strategic objectives: control of regions, support in rural population centres, legitimacy (based on a variety of factors, including the number of various types of units, as well as the political effects of air strikes, terrorism, and drug labs), and finally control of the capital. The rebels need to win in all four categories before the game ends. The government is just trying to hang on.

Judging from the title (revolution not revolución) the insurgents are a group of rebellious  anglophones.

The game turn starts with a random event. These are not entirely random, in that players have some choice as to which event occurs.

Next, the rebel player takes two actions from a menu of five choices:

In addition, they may undertake an optional act of terrorism.

The government then takes one action from their own menu of possible actions:

The government may also undertake an optional airstrike, if they wish.

Units have different combat ratings for jungle, rural (farmland and towns), and urban terrain. Police and insurgent units may not leave their own region.

Turn 1: All looks relatively quiet, but insurgents are lurking in the distant jungle. This is the classic first stage of a Maoist-type insurgency.

Playing as the government, my primary strategy was to mobilize as many police units as possible to hold rural areas, and then upgrading police in the capital to better quality army units. Ed’s insurgents sprouted like revolutionary mushrooms in the jungle, where he also hid a drug lab or two. The insurgents were then upgraded and began to take on my police units in the more populated rural areas, sometimes being driven back, but other times overrunning my positions. Since victory in combat gives the rebels a free unit upgrade, the gradual effect of these victories was to improve the quality of the revolutionary army through captured weapons and battlefield experience.

Turn 5. I’ve already lost control of Santiago, Rio Nochas, Esturia, Chi Machura, and Los Ablos. However the rural towns (and hence the roads into the capital) are still held by police garrisons. We’re on to the second stage of the insurgency, as the guerrillas expand the territory under their control.

Turn 11. The rebel army continues to grow, although most of the rural population centres are still under government control.

Turn 16. Caring little for political legitimacy, the government militarizes the capital and conducts frequent airstrikes. More and more of the rebel units have been upgraded to guerrilla or regular status—preparing for the third stage of an insurgency, engaging in semi-regular combat against government forces and major urban areas.

It was all very Maoist, as more and more of the countryside gradually came under the rebel control, slowly surrounding the capital. Airstrikes sometimes slowed the rebel advance, but at the cost of government legitimacy. However, my mobilization in the capital (aided by a well-timed event card) made it a difficult nut to crack. I managed to hold on to the end, and squeak a narrow victory—but only just. 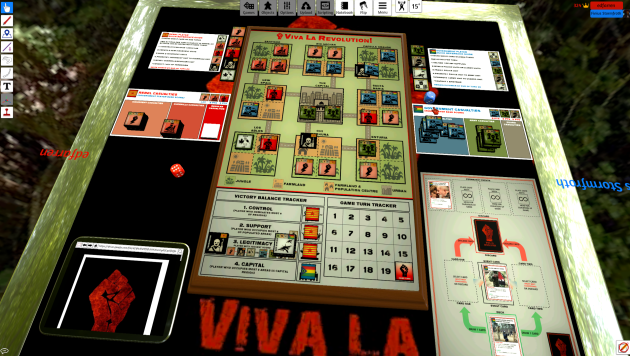 Turn 20: While the government has had some success with a counter-offensive to the south, army units sent to New Spain and Santa Maria have been destroyed. Although this has left the defences of the capital severely weakened, it is the last turn—so the government wins (barely).

I thought it all played intuitively and smoothly, and the progression of the insurgency certainly fitted the classic model. We discussed a few tweaks, for example introducing a “planning” action that would enable a player to take an extra action in the next term. This would enable more organized offensive and counter-offensives, better matching the battle rhythm of most military campaigns.

Much of our discussion focus on the event cards. In my view, such cards should never be so powerful as to decisively shift the balance of the game, which would lead players to attribute a game outcome to blind luck. (In Viva la Revolution, event cards are only semi-random, in that players have often have a choice as to which of two cards is triggered.) In a game of this sort, five major types of card effects are possible:

In a game like this, moreover, one could reconfigure the event card deck depending on the audience and purpose of the game. Playing Viva la Revolution for fun? Then you want more catch-up cards and fewer snowball cards, and quite a few amusing minor events. Using it for training purposes? Then you want more snowball cards (because that’s the way the insurgency works), more investment cards (because these allow players to strategize more), and appropriate consequence cards (to highlight the costs of doing things wrong, violating the laws of armed conflict, and so forth). In the latter case, it is especially important that the game design incentivize the kind of behaviours and choices that you are trying to teach.

If you’re interested, you can see the game at the Steam link above. Ed has also set up a BoardGame Geek page, to which he will be uploading game rules and print-and-play files.