A Very British Coup: A game of political negotiation

The following piece has been written for PAXsims by Jim Wallman of Stone Paper Scissors. A Very British Coup was run at the recent Labour Party conference in Liverpool, where it attracted some press attention. You’ll also find additional details on Jim’s blog, No Game Survives…

Late in 2017 I was approached by Richard Barbrook of Digital Liberties to design a political megagame for UK Labour Party activists to practice negotiation skills and practice balancing ideology and pragmatism.

A primary inspiration for the game was to come from Chris Mullin’s political thriller A Very British Coup, published in 1982 and depicting a fantastical scenario of a principled and popular left-wing labour leader (Harry Perkins) sweeping to power in an unexpected election victory as a discredited and failing Tory government collapsed under a plethora of scandals.  The action of the story was all about how the  ‘The Establishment’ – the bête noire of the Left – comprising, press barons, the old boy network, the security services and the military, egged on by Foreign Influences (a Republican-led USA) would conspire to bring down a popular socialist government by subversion, foul means and fake news.  The book was dramatised by Channel 4 in 1988, and I well remember enjoying it immensely at the time.  Clearly a fantastical scenario. 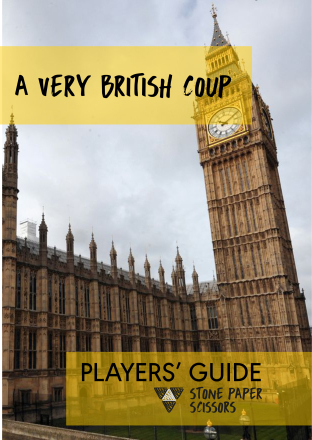 Designing a purely political game has a number of issues that affect the megagame design.  In this case the main design aim was a game that would be accessible to non-gamers, or at least people for whom the only board game they would have heard of would be Monopoly.  In addition the game should maximise negotiation to give the players the chance to not only negotiate but to experience, directly in the game, second (and even third) order consequences of their negotiations.  Something that the players might rarely get to do in a safe-to-fail environment.

The chosen game theme was especially appropriate – we did not want to divert or distract players into current political arguments or rivalries – so setting the game safely in the 1980s meant that whilst the background was familiar enough, it was also possible for a player to role play a faction that might not necessarily represent her current political perspective.  The key to the game was to be negotiation, after all.  It was also for this reason that the game simplified and adjusted the 1980s setting – the aim was not for the game to be a detailed political simulation but a negotiation game themed on that topic.  This allowed better game balance and player agency (although the ‘unhistorical’ aspect did worry a tiny minority of older players who remembered the 1980s, some of whom seemed to still want to refight those old battles!).

The first step, of course, was to build the game environment and a number of experts in the history of the Labour Party in the 1980s helpfully created a list of Labour ‘Factions’ who would represent the majority of the player teams.  Of course only having Labour Factions as teams would miss the important element in any game of an active adversary – an adversary adds that important element of pressure and tension into the game.  The scenario described in the eponymous book has some very clear adversaries.  So it was obvious from the outset that the primary dynamic of the game would be a number of Labour party factions negotiating and interacting, with a smaller group of ‘Establishment’ player teams providing challenges and attempting to exacerbate the infighting and bring influence to bear to de-rail the left-wing legislative programme.

But what would the Factions be negotiating about? What would be the role of the Cabinet? How would players interact with each other?  These are (and were in this case) key game design questions.  It is not enough to just have players in the room talking to each other – they must also be making meaningful decisions and taking in-game actions that have in-game consequences.

And this is also the point where any megagame design has to, almost inevitably, part company with the narrative of a novel, play or film that inspired the game theme.

To be at their best, megagames have to be open-ended rather than scripted, and the participants must be given real agency in the game.  So whilst the game can be inspired by a novel it cannot (and should not) attempt to become a re-enactment of it.  This is an important aspect of game design – works of fiction are not (or at least rarely) amenable to good gamification straight out of the pages.  It is important to remember this.  Just because characters exist in the fiction does not necessarily mean they would have agency in the game context – often they do not.

As part of my research I re-read the 1983 Labour Manifesto, and the description of the real aspirations of a fairly leftish party of the time (or ‘far left’ by comparison to the Blair years).  This was the context of Mullin’s original story, where it was the Perkins’ Government’s programme of ‘dangerious left-wing dogma’ that the Establishment was trying to counter.  So it seemed obvious to me that a key focus would be on implementing the manifesto.  Party Faction teams would therefore be arguing and manoeuvring to have their favoured policies enacted as early as possible in the life of the government. The game then tracked, for each policy, its Impact, Cost and Outrage scores.  Balancing these three factors to get the most impact with the least cost or outrage (from the right wing press) was the core game metric, although there were other factors such as the popularity of the policy with party members, MPs and the Trade Unions. It also quickly became obvious that the Cabinet would not be played by players because this would erode the role of the faction teams as the main drivers of the game (remember the game aim of maximising the opportunity for practicing negotiation skills).  So the game would have the various factions seeking to influence and ‘control’ non-played cabinet members, and use that as leverage in the important game process of setting the legislative agenda.  Control of a Cabinet member would increase the influence a faction had, particularly in Parliament – but control could be challenged and other factions could use their influence to gain control instead.  The struggle to influence the Cabinet was the second main activity for player teams, both within the Labour Party and the Establishment (who could bring the old boy network into play too).

The game, for the Labour Factions was on four levels and members of the teams were expected to manage their time to work on multiple levels simultaneously:

The aspect of time management and team coordination are also important parts of the game experience.  Teams who were able to manage themselves well, found the game easier. Obviously, the Government (represented by the collective activities of the Labour Faction teams) as a whole would get little or nothing done, unless it could manage its infighting and cut deals – ‘log rolling’ if you will – the game allowed players to have a lot of fun with doctrinal and principled arguments and infighting.  And that is entertaining in its way.  But, unless they find ways of pulling together, the party’s impact is small, and consequently its public support dwindles under the constant assault of a hostile press.  Too many individual victories could lead to group defeat, and an early General Election (= A Bad Thing).  And this was the point of the game – illustrating that holding on to a position dogmatically meant that policies failed to become enacted (in the game) – and players learnt though emerging gameplay that the only way they can achieve sufficient impact as a government is by finding common ground and compromising. This is a non-trivial challenge, but one that is obviously mirrored in the real world.

The Establishment Adversaries in the game also influenced the progress of legislation and the impact of government by:

However, the Establishment teams also had their own negotiation and communication challenges.  One of my main changes over the original novel was to make how the Establishment works a little more realistic – so rather than a monolithic extra-democratic power bloc envisioned in some of the more paranoid fears of the left in the 1980s in this game they are a good deal less efficient and also have their own internal pressures, objectives and concerns.  Organising resistance to the new Government’s policies has to be in the context of resolving their own internal factional issues. Whitehall has often been described as ‘a loose association of warring tribes’.  Hence in this game the Establishment is more ‘Yes, Minister’ in feel. This opens the game up to negotiation between the Establishment and the Labour factions on specific issues where there are common interests.  This made the game a lot more nuanced and interesting for all the teams.

The value of the game, which has been run several times now, is in the way it highlights this conflict between factional perspective and wider objectives.  Players in the game often find that the first couple of turns the government is pretty ineffective as the infighting leads to watered down or low-impact policies being enacted, or even legislation failing to be enacted at all. As the game progresses the players realise (usually) that more can be achieved by compromise, careful communication and even a bit of mutual trust and respect.

Far from being a game to teach the Labour movement to ‘defeat’ those who would oppose it from within the party and/or from the so-called ‘Deep State’ this game encourages players to practice the skills that are practical and useful is defusing internal conflicts and finding common ground and consensus.

Finally a couple of anecdotes from previous games illustrate how a very simple game system can produce some interesting emerging gameplay: