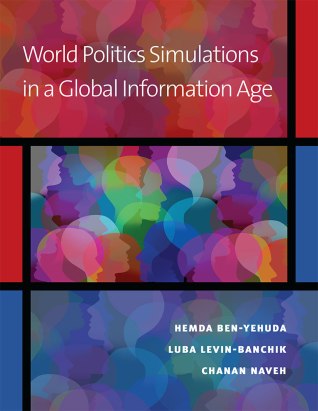 This book discusses the value of simulations in the teaching of international relations, and then offers guidance on how to run them. In Part 1, the focus is on pedagogical value of simulation, the various types of simulations available, and the factors to be considered in designing or selecting one. Part 2 focuses on running a simulation: how to prepare students, preparation of briefing materials, and processes and procedures that might be used. Part 3 looks at student feedback and instructor debriefing, as well as course assessment. In Part 4 the book turns its attention to “the future of world politics simulation.”

The book is very much built around the authors’ preferred type of simulation, a hybrid approach combining both face-to-face and digital interaction, the latter conducted via Facebook, email, or similar means. This is indeed a powerful approach, and one that I’ve been using for two decades in the annual Brynania peacebuilding simulation at McGill University, as well as in some serious policy simulations. It has much to recommend it.

Since the focus of World Politics Simulations in a Global Information Age is on negotiation simulations and international conflict, it invites comparisons with Natasha Gill’s Inside the Box: Using Integrative Simulations to Teach Conflict, Negotiation and Mediation, which was also published in 2015 and was previously reviewed at PAXsims.  It might also be compared with Mark Carnes’ Minds on Fire: How Role-Immersion Games Transform College (2014).

Ben-Yehuda and her colleagues makes much more effort to relate simulation use to the teaching of international relations than either of the other two (although, in fairness, Carnes’ book is really about using role-play simulations in the teaching of history and the humanities). World Politics Simulations is, however, often a rather more laborious read than the other two, lacking the lively style of Carnes in particular. Gill also does a better job at addressing some of the issues that arise in a simulation, and different methods for handling them. All three volumes are very much describing on their own preferred model, and do not fully address other approaches, materials, software, and resources. Finally, the Gill volume is by far the cheapest of the three, since it is available as a free download.

Overall, this is a welcome contribution to the growing literature on the use of simulations in the political science classroom.