Previous McGill gaming updates for the Winter 2018 term can be found here (March 22) and here (February 3).

The regular school term at McGill University ended on Monday, and final exams are just starting. At the moment I am in the process of grading ninety or so student debriefs from our recent week-long (April 4-11) peacebuilding simulation in POLI 450/650. They are always interesting to read, encourage students to reflect on the simulation experience, and often contain insights from the game that had not otherwise occurred to me.

This year’s conflict in Equatorial Cyberspace saw months of tortuous negotiations between the government of Brynania and the Popular Front of the Liberation of Zaharia, finally resulting in a ceasefire and agreement on principles for a future peace deal. A small United Nations peacekeeping/observer mission, composed of Ethiopian, Indian, Canadian, and German personnel, was deployed to monitor and support the ceasefire at the most critical flash-point, the contested southern port city of Mcgilldishu. In the north, a ceasefire was also agreed with the diamond-smuggling warlords of the self-styled “Free People’s Army.” Elsewhere in the country, however, conflict continued: in the south, the radical Zaharian People’s Front conducted a series of successful hit-and-run guerilla attacks against government forces near Diku, while the western city of Aiku was seized by Icasian paramilitaries. A bloody, urban-type fight to recapture it followed, looking very much like the recent  Iraqi campaign to liberate Mosul. 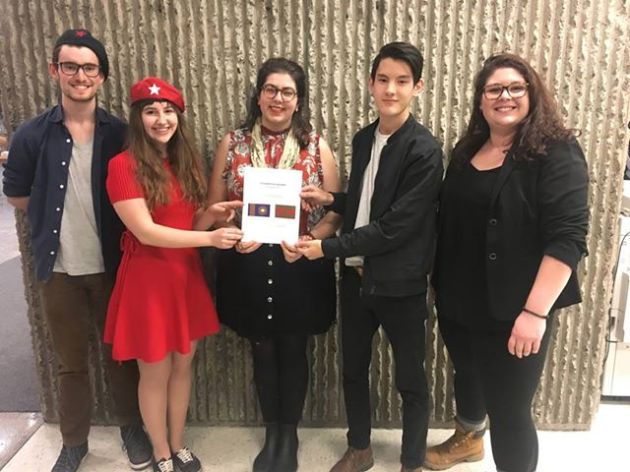 The government of Brynania and the Popular Front for the Liberation of Zaharia sign a peace agreement. Left to right: brutal defence minister, genocidal dictator, nice lady from the UN, scheming insurgent, ruthless guerilla.

The result—a ceasefire and preliminary peace agreement, supported by a UN force—has been the most common outcome we have seen over the 17 years I have been running the peacebuilding simulation at McGill, although certainly not the only one. Military casualties were the highest yet, however, due to the intense fighting around Aiku and with the ZPF. Civilian casualties were also very high, with the aid community slow to respond to the complex humanitarian crisis in the south. 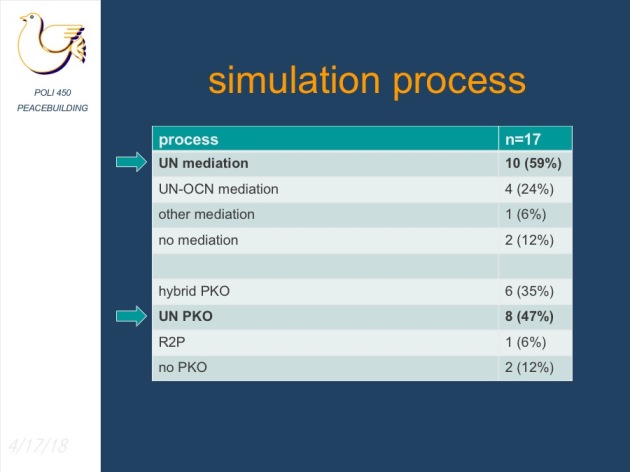 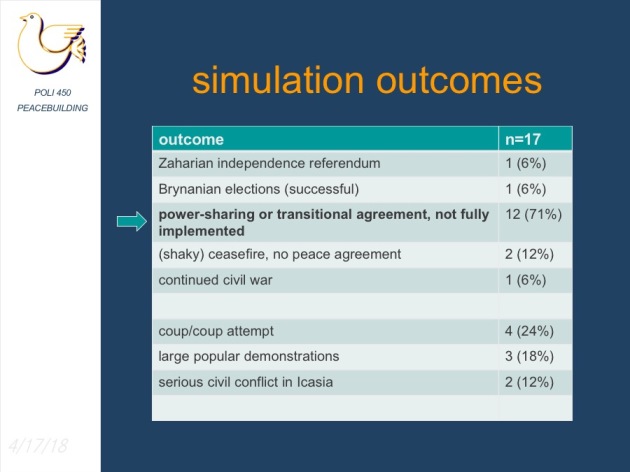 More than two hundred thousand refugees fled the area during the seven months the simulation covered, although the United Nations High Commission for Refugees did well in addressing their immediate needs—inspired, perhaps, by a real message of support sent by the actual High Commissioner of UNHCR at the start of the simulation (thanks again, Filippo!). 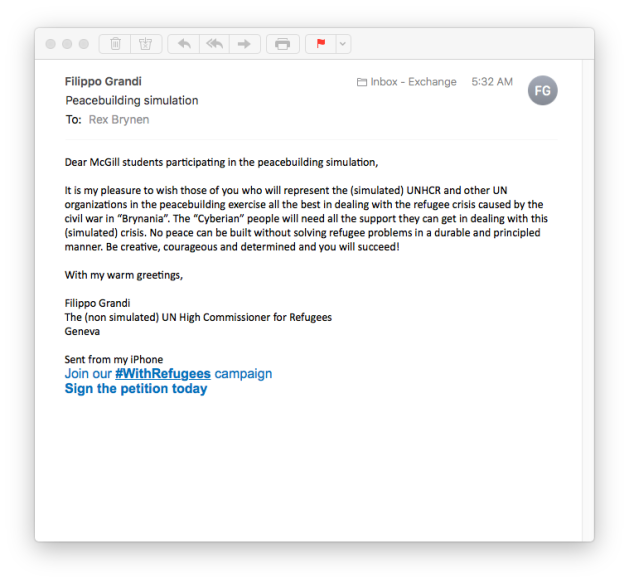 Students and CONTROL alike were active on Twitter throughout—sometimes seriously, sometimes less so. One of the nice things about running this game in a university setting is that the participants can be very witting in their public statements (and Titter trash-talk), without in anyway distorting the fundamental dynamics of game or undermining the learning experience.

The Brynania simulation is something of a labour of love: it took up around 18 hours a day of my time for a full week, during which I read or sent 6,438 simulation emails and simultaneously monitored 118 Facebook or other online messaging forums/chats—plus Twitter. You will find a couple of video documentaries on Brynania SIMs here and here.

My POLI 490 seminar in conflict simulation has also wrapped up, although the game projects are not due until the end of the month. The seminar this year was a practice run for a full class I’ll be teaching on the topic next year, and one thing I have learned is to add some graded milestone reports to the evaluation schema to make sure that each of the design teams gets a prompt start on developing a physical game prototype and playtesting it.

This year, there are three teams, one working on a game of the Darfur conflict, another developing a semi-cooperative game focusing on China’s One Belt One Road economic initiative, and a third exploring Iraqi military operations against ISIS in west Mosul in 2017. 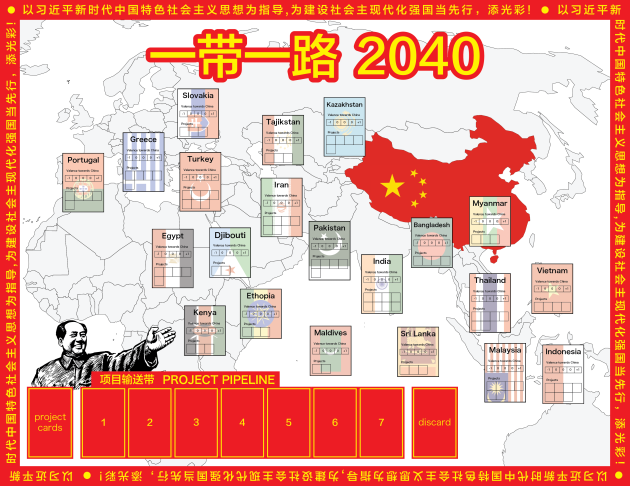 The game board for One Belt One Road.

Yesterday I was involved in a playtest of the Mosul project (“We Are Coming, Nineveh”). It is simple and elegant to play, but there is a lot built into the game design:

We will see how they all pull it together when it is finished—as they are finding out, there is a lot of detail to be ironed out before a game concept becomes a polished, final reality. 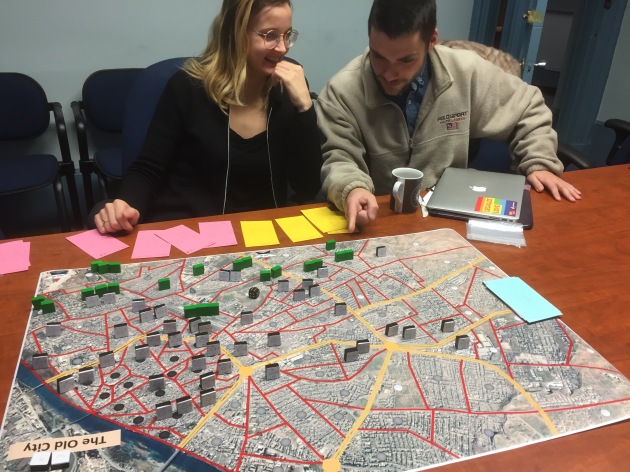 Playtesting We Are Coming, Nineveh. At McGill University, our conflict simulation course teaches the pointing skills so essential to serious wargaming. 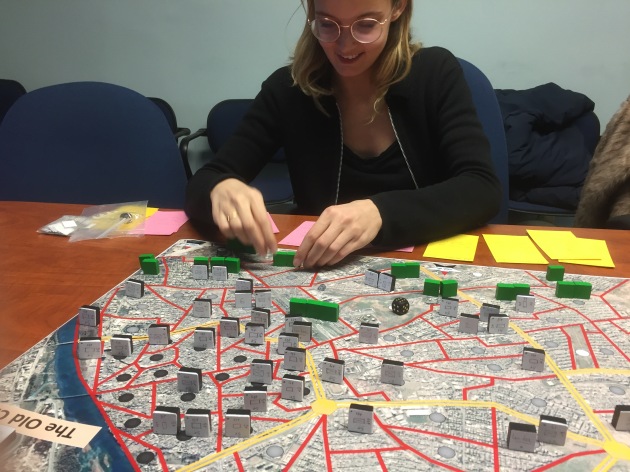 Advancing forces of the Iraqi Counter Terrorism Services towards the IED-strewn alleys of the Old City.

At our final POLI 490 seminar meeting last week, we explored the issue of “in-stride adjudication”—an issue that will be examined in detail at this summer’s Connections US professional wargaming conference in Washington, DC. Since the students have acquired considerable experience this term participating in games with some degree of in-stride adjudication (Brynania is primarily adjudicated that way; February’s DIRE STRAITS megagame involved large doses of it, and they’ve all played in matrix games that often involve a subtle sort of in-stride adjudication by the game facilitator) I thought it would be useful to get player perspectives on the issue. It turned out to be an excellent discussion, and one of the students has offered to write it all up as a white paper for the Connections conference.

Now, back to grading papers!