Last week, Dr. Anja van der Hulst (TNO and University of Amsterdam) was kind enough to run a game of the (somewhat-awkwardly-named) “Go4it Comprehensive Approach simulation Model” (or GCAM2.0) for 18 student volunteers from my POLI 450 course on peacebuilding. It went very well indeed.

GCAM2.0 was developed in cooperation with the NATO Civil-Military Cooperation (CIMIC) Centre of Excellence, and is now regularly used in both Dutch and NATO military training. The “comprehensive approach” itself is NATO jargon intended to underscore the need to engage a variety of means and tools and a multiplicity of actors in stabilization operations:

NATO’s new Strategic Concept, adopted at the Lisbon Summit in November 2010, underlines that lessons learned from NATO operations show that effective crisis management calls for a comprehensive approach involving political, civilian and military instruments. Military means, although essential, are not enough on their own to meet the many complex challenges to Euro-Atlantic and international security. Allied leaders agreed at Lisbon to enhance NATO’s contribution to a comprehensive approach to crisis management as part of the international community’s effort and to improve NATO’s ability to contribute to stabilzation and reconstruction.

GCAM2.0 is a card-driven game with computer-assisted adjudication, in which four sets of players—the local government in a fragile and conflict-affected country, a (UN or NATO) foreign task force, NGOs, and opposition forces (OPFOR)—allocate limited resources each turn to a range of possible assessments and interventions.

When the interventions are entered into the computer, it immediately updates a range of political, security, and socio-economic indicators, which are displayed to players as a series of bar graphs. The effectiveness of interventions may be affected by contextual conditions, such as security; by what other cards have or have not yet been played; and by how many teams have allocated resources to support any given initiative.

Teams discuss what actions to take, while the projector indicates the current situation.

Players look at their cards and hence various options. 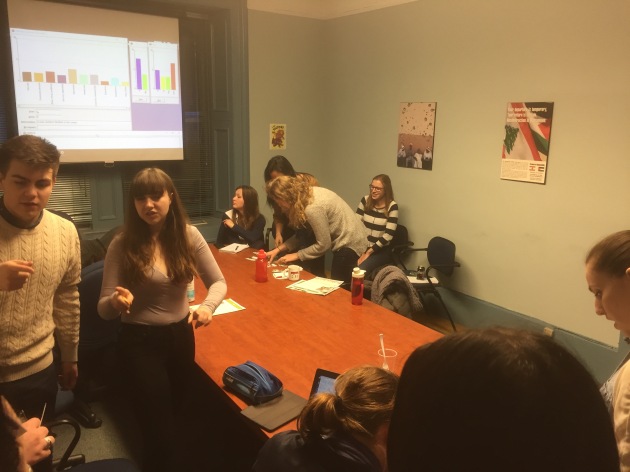 In our game, OPFOR decided early on to not pick a fight with the Task Force, but rather try to appear cooperative—while at the same time laying the groundwork for its own de facto administration in the conflict area. They did this by supporting their own clinics, schools, and other projects (often securing NGO or Task Force support), while always finding some excuse not to support government initiatives. The Local Government grew ever more frustrated that no one was listening to their legitimate authority. 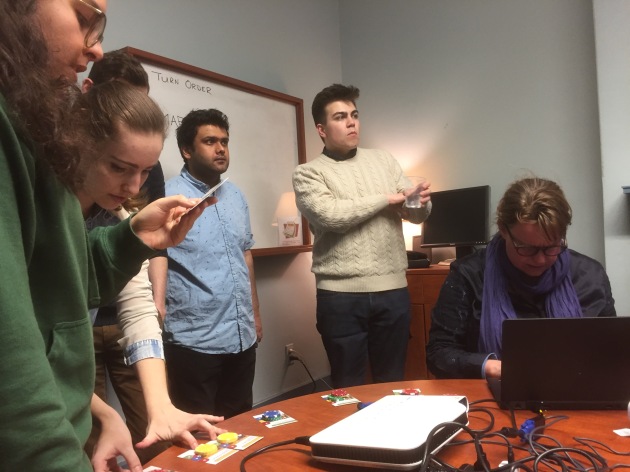 Players wait to see the results of their latest actions as Anja enters the details into her computer.

As their local popularity grew, so too did OPFOR resources. In the end they even branched out into drug production —and, what’s more, somehow managed to convince the NGO team to fund it under the guise of being “an alternative agricultural project”.

An investment in illegal drug production. 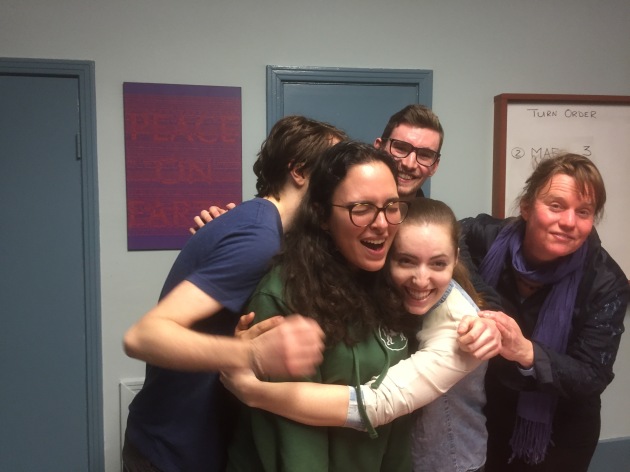 Anja and OPFOR (locally known as “Team Evil”) thank an NGO representative for her unwitting contribution to the local drug trade.

The game lasted about 2 and a half hours, and everyone seemed to both enjoy themselves and learn from the experience —including the importance of not blindly supporting projects suggested by nefarious local rebel factions!