Rise Up is a game of social activism for 2-5 players, in which the participants collectively seek to achieve a goal in the face of resistance from “the System.” Each player represents an activist with distinct skills, who must mobilize supporters and use card play to advance the cause of the Movement. Watch out, however–the System fights back. If the players secure victories in five of ten sectors (Neighborhoods, Workplaces, Government, Media, Farms, Environment, Culture, Internet, Faith-Based Communities, Campuses), they win. If the System achieves victories in any four of these first, they lose. The various Movement cards depict an array of possible actions, ranging from court challenges, research, community action, and press conferences, through to strikes, viral videos, and flash mobs. Each card has a cost associated with play, and yields different effects. 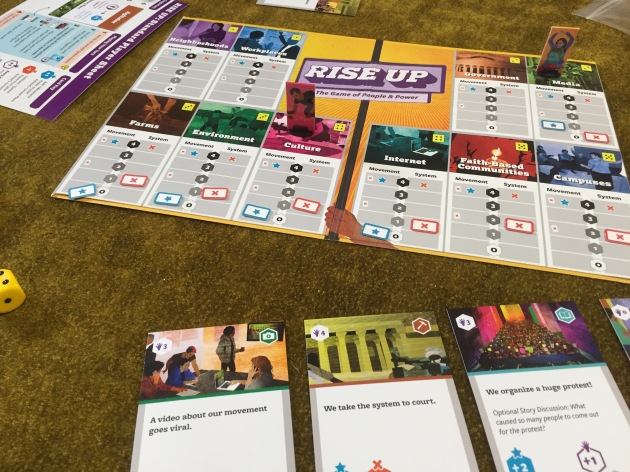 The game can be played within 90 minutes or less. There is a set of simplified rules included, but the core game itself is so straight-forward and easy to learn that it will rarely be required. The game components are satisfactory, although the various markers are a bit small and thin, and will be prone to being knocked or blown aside by a clumsy activist or a gust of dystopian wind. In my set I have replaced these with wooden meeples and cubes for a little more weight.

The simple game mechanics aren’t especially innovative, but they work well enough. The real learning is to be had from the narrative that the players construct, and the various discussions that the game can generate. The game lacks the detail or nuance to make it a genuine simulation of social mobilization. There is, for example, but a single resource in the game—popular support—and the financial and other elements of successful organization aren’t represented. 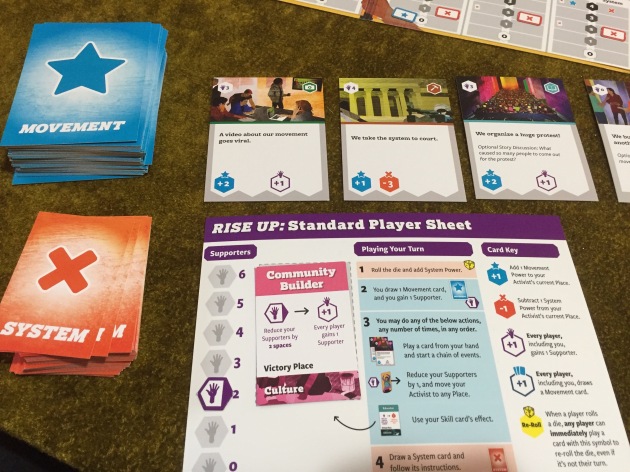 This really isn’t a problem, however. Rise Up is well-designed as an ice-breaker and discussion-starter. easily played in a short period of time by players from any background and those with no substantial gaming experience. Indeed, the game’s unavoidably simple representation of complex reality itself provides teachable moments, since players can be challenged to design new cards or game modifications to address these. Three print-and-play expansion packs are already available ($10) each), as is an education resource package.