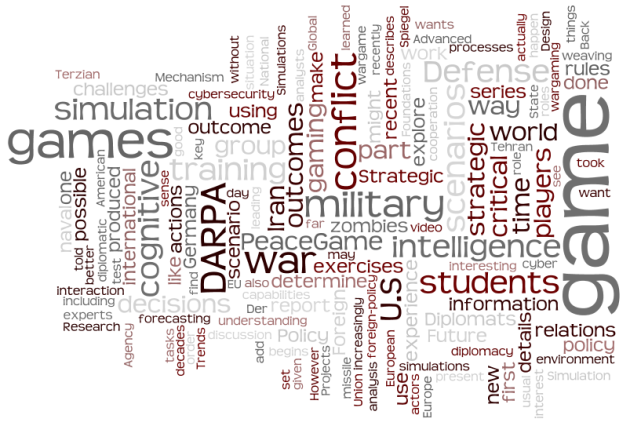 PAXsims is pleased to present a number of items on conflict simulation and serious (and not-so-serious) gaming that may be of interest to our readers.

Have any material for us to include in a future edition? Send it on!

The Defense Advanced Research Projects Agency (DARPA) Defense Sciences Office (DSO) is requesting information on mathematical and algorithmic foundations for the practical design and assessment of strategic mechanisms. Of ultimate interest are capabilities to strategically assess and manage the actions of state and non-state actors utilizing a mixture of economic, diplomatic, social, and military options. Development of strategic mechanisms will require the integration of recent advances in game theory, behavioral economics, computer science, and artificial intelligence.

Definitions that are relevant for responding to the RFI are:

Defense Systems offers an explanation of what this is supposed to be:

DARPA’s Foundations for Strategic Mechanism Design wants to see whether it’s possible to devise a better high-level wargame that will prevent the U.S. from being surprised by the actions of an adversary, or enable the U.S. to surprise an opponent with its own actions. However, the game that DARPA envisions is the opposite of the usual Pentagon simulation: while most military war gaming aims to determine how a given plan might work out if implemented, DARPA wants a game with a predetermined outcome. The game is there to tell the military how to achieve it.

“We would want to shift from a ‘simulation’ mindset to thinking about the creation of the rules of the game itself,” DARPA spokesman Jared Adams told Defense Systems. “For someone that has done a lot of war gaming, this is the hardest part: designing the scenario, objectives and rules of the players to explore certain decisions in an intelligent way. We want to do the inverse problem: given a desired set of strategic outcomes, could you define the rules of the game in such a way that the decisions will lead to that?”

This isn’t a new technique. In some versions of alternative futures analysis or “backcasting,” analysts are asked to work backwards from assigned outcomes to determine the most plausible paths whereby that outcome might occur. Done well, they help to identify inflection points, critical junctures, key drivers/variables, and possible warning indicators. It can also be useful to help establish what needs to happen for a particular policy end-state to be achieved.

Usually this is done by an analysts, analytical team, or discussed in a seminar/BOGSAT setting, not run as a kind of reverse-engineered computational (war)game. To be frank, having taken part in such analysis, I’m not convinced a game would add much compared to a well-run group discussion. However, DARPA is all about experimenting with new approaches, technologies, and capabilities, so it will be interesting to see what they come up with.

According to The Telegraph, “The German army has war-gamed the break up of the European Union in study of security crises that could face the country by  2040.”

No, not exactly. If one actually checks out the original report in Der Spiegel, the Germany military has simply produced a strategic forecasting product similar to the US National Intelligence Council Global Trends studies or the UK Ministry of Defence Global Strategic Trends reports. Some of the scenarios in it are rosy. Others are not (via Google translate).

In the sixth scenario, the worst (“the EU in disintegration and Germany in reactive mode”), Bundeswehr strategists assume a “multiple confrontation”. The future projection describes a world in which the international order erodes after “decades of instability”, the value systems worldwide diverge and globalization is stopped.

“EU enlargement has been largely abandoned, more states have left the community, and Europe has lost global competitiveness in many areas,” the authors write. “The increasingly disorderly, sometimes chaotic and conflict-prone world has dramatically changed the security environment of Germany and Europe.”

The Guardian describes the report as “contingency plans,” which is overstating things a bit too. Such forecasting exercises are usually intended to spark critical thought, and may impact policy in a very indirect way, but fall short of “planning” in any meaningful sense.

From the Der Spiegel report there is no evidence that anything was wargamed at all. The scenarios would, however, certainly make interesting settings to explore using wargaming methods.

At The American Conservative, Harry Kazianis warns that he fought a war against Iran—and it ended badly:

Back in 2013, a group of my colleagues did a series of wargames on what would happen if Iran and America ended up in a conflict. Held at a secret location in think-tank land here in D.C., we sketched out the various possible pathways to conflict, what each side’s war aims and strategy would be, and how such a conflict could end. While the game was conducted off the record, considering where U.S.-Iran relations seem to be headed, my fellow wargamers have allowed me to share the details of one of three scenarios in an effort to promote a better understanding of the risks involved if the bombs really do start falling.

In the most intense of our three-day wargaming scenarios, we looked at a situation in 2020 where U.S.-Iranian relations had been souring for several years. Both sides are jockeying for position over a geopolitical chessboard stretching from Lebanon all the way to Afghanistan. In this scenario, Tehran is becoming increasingly upset over U.S. naval forces building up and exercising in the Persian Gulf. To make its displeasure known, Iran decides to test a salvo of intermediate range missiles that fly far into the Indian Ocean—with an ICBM test looming in the next few months. The situation then gets infinitely more complex when U.S. intelligence is tipped off that a second barrage of missile tests is being prepped, and destroys them in mid-flight thanks to U.S. missile defenses in the area.

Our wargame begins when Tehran responds, deciding to conduct large-scale naval exercises near the Strait of Hormuz. Iran also declares a naval exclusion zone, which essentially closes the important waterway for what would be a week of training drills—all to show off Tehran’s growing military power and ability to roil oil markets.

You’ll find more details at the link above.

The most recent Foreign Policy magazine PeaceGame, produced in cooperation with the Emirates Diplomatic Academy and Harvard University’s Belfer Center for Science and International Affairs, was aimed not at experts and policy-makers, but budding young diplomats. According to the press release from FP:

The Future Diplomats PeaceGame brought together a select group of students of leading diplomatic academies from 21 countries and five continents. Looking to emerging foreign-policy challenges, the Future Diplomats PeaceGame took on the topic of cyber threats. Mohammed Al Dhaheri, one of the participants in the PeaceGame, said: “Being part of this event for the first time proved to be a revelation. I was able to appreciate and experience first-hand the challenges in dealing with people with different perspectives. It taught me that an understanding of varied world views is critical to finding a common space where we can cooperate to arrive at a solution that works for all of us.”

The first day of the event was dedicated to training with some of the leading experts in cybersecurity, defense, and diplomacy. Sessions focused on the critical issues in this rapidly evolving field of international relations, with a special emphasis on the interaction with broader foreign-policy challenges.

On Day 2, the Future Diplomats took on the role of key international stakeholders, navigating a series of simulated cyber events with the potential to escalate into full-blown conflict that required them to explore ways in which they could advance their country’s interests while achieving a peaceful outcome. The moderated discussions were presided over by a panel that combined decades of experience at the highest levels in both cybersecurity and diplomacy, providing expert commentary and context throughout the proceedings.

Deanna Terzian, the president of CurriculaWorks, says the goal of the game is to “enter-train” its users. Other developers, she says, have tried including cognitive training tasks in games, but without weaving them in at a fundamental level.

“What we’ve done is we’ve integrated the cognitive training into the gameplay so when you are shooting the zombies you are actually using the mental set switching tasks,” she told Foreign Policy in an interview. “You’re using your mind to determine which weapon to use in order to take down the zombies as they’re coming at you.”

So, the question is, can you make cognitive training fun by weaving in a hunt for zombies? The company is trying to create a game that will convince players to do “something that is arduous but good for them,” Terzian says. “That’s part of our development philosophy: We like to add a spoonful of sugar to do things that are good for you.”

The game is currently available in early-access edition on Steam.

The simulation places law, policy, intelligence, military, and communications students in their respective roles. It begins with the world as it is. Students draw on everything they have learned so far in their education as they respond in real time to new inputs from the Simulation Control Team, and dynamically to decisions by other players. Together with an elite group of seasoned practitioners in top roles–including federal judges, legislators, and retired generals–students must work as parts of multi-profession teams and use multi-institution processes to solve problems ripped from the headlines. The simulation’s architects present the players with realistic dilemmas and pressures of time, personality, information, consequence, and ethics. Ultimately, the exercise’s outcomes are determined by player decisions.

The 15th annual American Political Science Association Teaching & Learning Conference will be held in Baltimore on 2-4 February 2018. As usual, the conference will include a simulation and gaming track.

Simulations and Games
Simulations and games can immerse students in an environment that enables them to experience the decision-making processes of real-world political actors. Examples include in-person and online role-play scenarios like the Model European Union and ICONS, off-the-shelf board games, Reacting to the Past, and exercises that model subjects like poverty, institutions of government, and ethnic conflict. This track will examine topics such as the effects of gamification of course content on student motivation and engagement, cognitive and affective outcomes from simulations and games in comparison to other teaching techniques, and the contexts in which the use of simulations and games makes sense for the instructor.

Back in August, the long-running Extra Credits series produced a video on peace games, and the role that games might play in promoting cooperation and positive interaction. We forgot to post it at the time, but here it is now.