Tom Fisher, Tom Mouat, and I are currently developing a matrix game construction kit that will contain pretty much everything anyone needs to design, and run, a matrix game. Specifically, it will include:

The idea here is to make it relatively simple for anyone to buy the construction kit, design a game or scenario, and customize the tokens as need be using the stickers provided. We hope to have the entire thing finished by the Spring of 2017. Our efforts are being supported by Dstl.

The first game to be included will be ISIS CRISIS, with game scenarios covering both the rapid expansion of ISIS control in Iraq in 2014, and the Iraqi/Kurdish/coalition counter-offensives of 2015-16. ISIS CRISIS has been extensively playtested over the last couple of years, and  nicely illustrates how a matrix game can be used to model a contemporary political-miitary campaign at the strategic and operational level.

The second game will be a newly-designed one, A RECKONING OF VULTURES.

A RECKONING OF VULTURES is set in the capital of the fictional Republic of Matrixia. There, in the ornate Presidential Palace, surrounded by his most loyal Presidential Guards, the President-for-Life is on his death-bed—and various power-hungry factions are jostling to take power themselves. Once the President passes, competition between the would-be successors will escalate to open conflict until such time as the Central Committee of the Ruling Party can meet and agree on a successor.

A Reckoning of Vultures is a fictional scenario designed to demonstrate aspects of matrix game design. Unlike ISIS Crisis, the focus here is on urban space. Additional markers are used to indicate unit status, in this case the influence that rival factions seek to exert over actors, institutions, and assets. The game has three distinct phases—As Vultures Circle, By Beak and Talon, and The Buzzards’ Banquet—each with its own rules and game dynamics. Moreover, most of the final part of the game does not use matrix game-type interaction at all—thereby highlighting the ways in which a matrix game may be linked into another game system by generating scenarios, situations, or contexts.

Five factions compete for power in A RECKONING OF VULTURES:

Last night Tom Fisher and I playtested with the game with five volunteers from McGill University, plus a generous supply of pizza. None of the players were professional or serious hobby wargamers, although four had previously played ISIS CRISIS, and the other had taken part in some of our other political-military games.

Setting up the game. Unlike the playtest version shown here, the final version of the game will include a fictional tiled urban map that can be assembled in many different ways.

All in all, the game went very well. It was certainly very close right up to the end.

In the first phase of the game it looked as if CSID were establishing a commanding lead, having heavily infiltrated army units at the main military barracks. The Matrixia Armed Forces commander responded by redeploying suspect units away from key locations. The Ministry of Interior sought to purge CSID agents from among the ranks of the police. The wealthy Oligarchs focused on raising new funds, as did the National Union of Toilers. 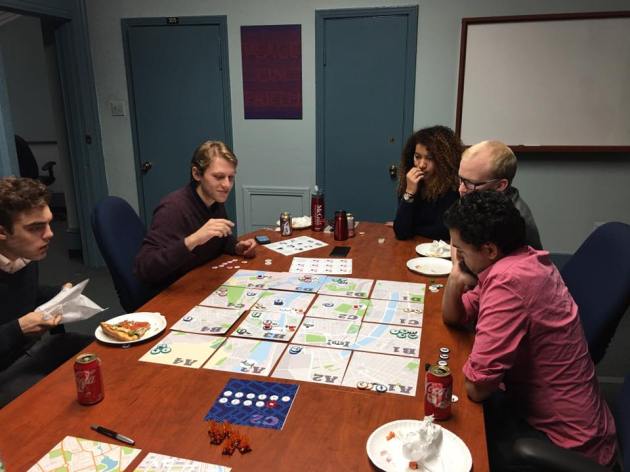 Much plotting (and pizza) underway.

Phase 2: By Beak and Talon

When the President-for-Life died on turn 3, however, everything was thrown into turmoil. The loyalty of most Army units held. Moreover, the Army had secured influence in the forces guarding the CSID HQ, setting the stage for an extended battle for control there. The Oligarchs hired private security forces/mercenaries, and tried to seize the national airport—but were decimated by the MoI police units there.

The President-for-Life is dead. Police units have blocked the nearest bridge, while rogue CSID and MAF units fight for control of the Intelligence Directorate. The colour of the token indicates (original) unit ownership, the adhesive graphic indicates unit type (police, infantry, leader, secret files, etc), and the smaller disks indicate units that have been subverted by another player.

MAF marines stormed the Presidential Palace, while MAF helicopter-borne paratroopers took control  of parliament. MAF aircraft also bombed the police units holding the Ruling Party headquarters, but to little effect. In retaliation MoI prison guards released NUT prisoners from the central prison, and together they sought to seize the main airforce base. They were unsuccessful.

The Oligarchs and CSID were quickly eliminated from competition, although the former’s superior financial resources allowed them to survive the game intact and place second overall. In Matrixia, money talks!

The leader of the National Union of Toilers fell out of consideration next.  Due to the workers’ having seized control of the main port earlier in the game, however, he was able to escape the country. The proletarian struggle is not yet dead!

In the final round of voting the Minister of the Interior managed to narrowly beat the MAF Chief-of-Staff, who promptly fled the country.

However the head of CSID was less fortunate. The former secret police chief was arrested, executed, and found guilty of treason—in that order.

The game was a lot of fun. We also had some very useful feedback, and in particular we’ll be adjusting some of the rules, especially regarding influence and subversion. Everyone thought the three phases of the game worked well together, and nicely illustrated the different ways matrix game mechanisms could be used.

In the coming weeks and months we’ll be writing and modifying rules, finalizing graphics, and doing some more playtesting. Watch this space!