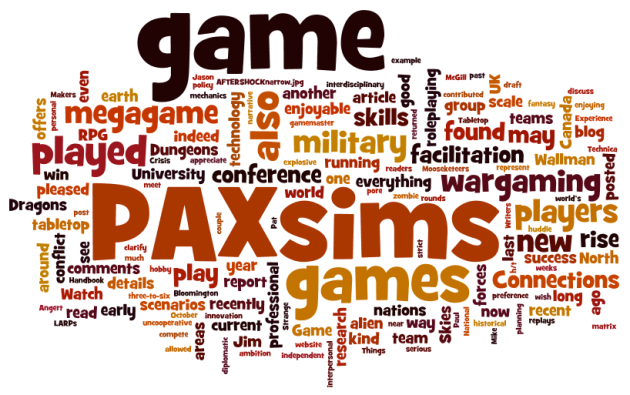 PAXsims is pleased to present some recent items on conflict simulation and serious (and not-so-serious) games that may be of interest to our readers.

A recent article in The Guardian offers an extensive discussion of “the rise and rise of tabletop gaming.”

We may now live in a world of Facebook, Pokémon Go, Netflix and iPads, but board-gaming is booming. Even the early 20th-century games explosion, which gave us such hardy perennials as Monopoly, Cluedo and Scrabble, has nothing on the current surge. Market research group NPD, which claims to measure around 70% of the UK toy trade, has recorded a 20% rise during the past year in the sales of tabletop games (including card and dice games, war games played with miniature figures and role-play titles such as Dungeons & Dragons, in which players imagine themselves as heroic warriors and wizards in imaginary, fantasy worlds)….

I’m pleased to see that my favourite central London games shop, the Orc’s Nest, gets a mention.

If you play Dungeons & Dragons, be warned—”demons are out to destroy you!”

Having played D&D since the very (boxed, three booklet) beginning, I have long found it to not only be fun and enjoyable, but also a way to develop interpersonal, narrative, and analytical skills. Experience in running a D&D or other RPG game is also a very good way of developing game facilitation skills—indeed, as I’ve previously suggested at PAXsims, being a RPG gamemaster may be better preparation for professional wargame or policy game facilitation than being a traditional hex-and-counter board hobbyist wargamer.

Has D&D or another roleplaying game contributed to your own professional game facilitation or design skills? If so, email me some comments on the subject and we will feature the responses in a future PAXsims post.

A couple of weeks ago Ars Technica featured an article on the “explosive growth of the 300 player megagame.”

There’s a new kind of hybrid game doing the rounds that marries the large scale politicking of live-action roleplaying (LARPs) with the focused, often crunchy mechanics of an economic game. It’s played with dozens, even hundreds of players, it takes a whole day, and it has a clumsy sobriquet that perfectly encapsulates its grand ambition: the “megagame.”

Megagames have no strict definition, but here’s an outline of the (pretty typical) first one that I tried two years ago. Strange alien forces mass near the earth, alarming the world’s governments. Multiple teams of three-to-six players represent various nations, and teams take on roles like diplomats or military leaders. Each team plays its own straightforward game of economics to balance a country’s budget, fund the military, and direct scientific research.

These aspects of the game are all managed in “private play areas” depicting each country, but players also meet in more public areas to coordinate international strategic planning or to discuss diplomatic goals. They pore over a map of the world showing the movements of their armies and air forces. They huddle around a table that represents the UN. They forge alliances, compete to seize alien technology, and perform acts of espionage.

Occasionally a referee steps in to clarify a ruling or to announce a new event. Alien craft have been sighted on the Moon! Terrorists have kidnapped a head of state! Earthquakes! Perhaps there’s even a message from the aliens—who are played by another team of people kept separate from the action but nevertheless allowed to watch everything as the nations of earth banter and bicker.

This is Watch the Skies, only one kind of megagame, but so far the most popular. It’s enjoying replays and reinterpretations everywhere from Aberdeen to Australia. If your personal preference isn’t for the extraterrestrial, other megagames cover everything from military scenarios to Machiavellian historical intrigue. What they all have in common is a focus on social dynamics, independent referees who guide play and introduce new events, and a sense of scale that puts Diplomacy to shame.

They also share a lineage. UK-based Megagame Makers has been designing and playing these games for decades, long before Watch the Skies found breakout success. A key designer throughout much of this period has been Jim Wallman, and when I speak to him over Skype to ask the secret of a megagame’s success, I discover he has recently returned from a game in Canada and is consulting with the British military on simulating conflict scenarios….

You can read the full piece at the link above.

As for that “Jim Wallman” character, he was last seen in Canada running the New World Order 2035  megagame at McGill University, speaking at the Connections North wargaming miniconference, and leading a group of uncooperative juvenile Mooseketeers to safety during the zombie apocalypse…. 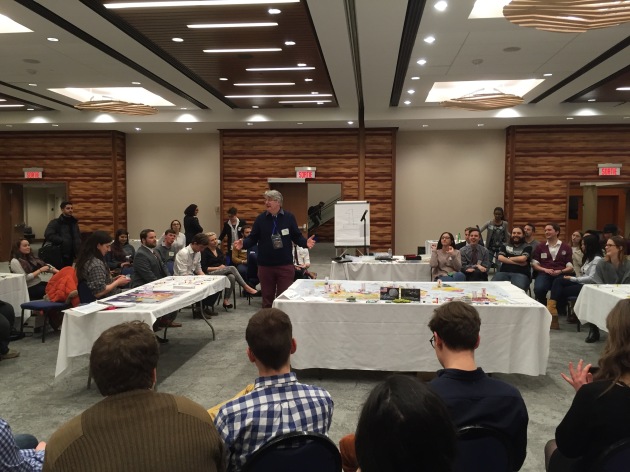 Staff from the Strategic Simulations Division recently briefed MG Rapp, Commandant for the US Army War College, on matrix games—using the Kaliningrad 2017 game as an example.

For additional details of the game, see this earlier PAXsims report by LTC David Barsness and Michelle Angert, as well as this playtest report from National Defense University.

If you have played AFTERSHOCK: A Humanitarian Crisis Game, but haven’t rated or reviewed it at BoardGameGeek or The Game Crafter, please do—we welcome the feedback!

He posted it back in early September, following the Connections UK conference, but we’ve been slow on updates: go and read Paul Vebber’s comments and presentation on wargaming and technology innovation at the Wargaming Connection blog.

A Wargamer’s Needful Things is a collaborative blog by Jason Rimmer, Mike Wall, and  Robert Peterson that offers game reviews and thoughtful commentary on the wargaming hobby. They also have a current contest to win a free copy of a new book by Rick Priestly and John Lambshead, Tabletop Wargames: A Designers’ and Writers’ Handbook (Pen & Sword Publishing, 2016).

The draft programme for the 2017 Connections Oz interdisciplinary wargaming conference (5-6 December, University of Melbourne) has now been posted.

I wish I was attending—I participated last year and found it very productive (and enjoyable) indeed.

The 2016 North American Simulation and Gaming Association annual conference will be held on October 26-29 in Bloomington, Indiana. You’ll find further details at the NASAGA website.