Exploring US engagement in the Middle East: A crisis simulation

Some weeks ago I posted a report on the game methodology that Bilal Saab, John Watts and I developed for a crisis simulation held at the Atlantic Council in Washington DC. The report from that game has now been released.

With the current American election campaign and change in presidential administrations due in January 2017, the debate over appropriate levels of US engagement in an unstable Middle East assumes vital importance. Should a new administration be more proactive in seeking to address threats, resolve conflicts, support allies, and deter foes? Should the new US president be wary about excessive American involvement in complex overseas problems, and focus on other concerns and issues closer to home? What should be done directly by Washington, and what is best addressed by local actors, alliances, and coalitions of the willing? What is the appropriate balance between doing too little and trying to do too much?

We focused in our June 23, 2016 crisis simulation on how differing levels of US engagement might affect Washington’s ability to respond to a regional crisis and how differences in US posture and policy might affect the political-military calculations and behavior of key regional and international actors. Approximately fifty former and current officials, diplomats, academics, and journalists from several countries took part as players or observers. 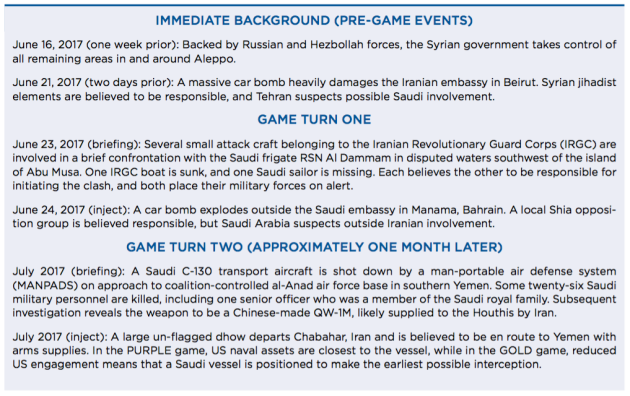 The game, I thought, went well. They key findings outlined in the report include the following:

Although it isn’t addressed much in the report, I thought the game also highlighted the profound policy challenges and dilemmas associated with the Syrian civil war. In the PURPLE game, the US team significantly increased US engagement in Syria, responding to Syrian barrel bomb attacks by shooting down regime helicopters and eventually declaring a safe zone along the Turkish border. However neither of these policies worked out entirely as intended. The Russians continued—and in some cases expanded—air operations, while the shoot-down of Syrian helicopters led Iran to double down on its support for Damascus by directly deploying several thousand combat troops to Syria. In northern Syria the declaration of a safe zone led the Syrian Kurdish YPG to declare sovereignty over Kurdish-controlled areas, an action which seemed likely to bring about a Turkish military intervention—thereby raising the spectre of a coalition member attacking the supposed coalition-protected safe zone.