Clashing in the classroom

What do early 1980s  The Clash punk lyrics  have to do with serious games? Nothing at all, other than I’m writing this in the airport in Harrisburg, PA. Ever since we flew over Three Mile Island on the incoming flight I have had the song Working for the Clampdown stuck in my head. 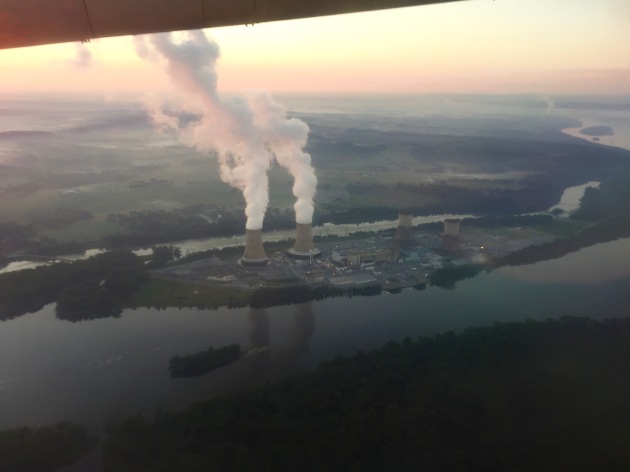 The morning sun bathes scenic Three Mile Island in a faintly radioactive light. It would have been nice to linger, but we had to SCRAM

Rather than working for the clampdown, however, I spent Saturday in nearby Carlisle taking part in a US Army War College panel discussion on wargaming in the classroom. The primary focus, not surprisingly, was on professional military education (PME). I also ran two of the several demonstration games featured at the event. Over two dozen people participated.

Setting up the event.

The first panelist was Peter Perla (CNA), who made the general case for the value of wargaming. Key to what Peter had to say was the emphasis he placed on process rather than outcome: while the outcome of a game is not irrelevant, it is what goes in the mind of the player that is of key importance. I couldn’t agree more, and it points to why building an engaging game narrative is such an important part of effective wargaming.

I presented next, identifying a number of serious game “worst practices” that was partially inspired by a 2004 US Naval War College and CNA study on (analytic) wargaming pathologies. Specifically, I addressed the dangers of:

James Sterrett ( Deputy Chief, Simulations Division,  Digital Leader Development Center, US Army Command and General Staff College) then offered some thoughts based on his experience of supporting and encouraging classroom wargaming at CGSC. He emphasized the practical considerations that affect what sort of game will be useful and appropriate, and the need to design educational wargames and scenarios so that they are fit for educational purpose. One-size-fits-all solutions, he suggested, rarely work well. He also highlighted that not all instructors are the same, and that classroom wargaming approaches need to take account of a teacher’s strengths and weaknesses too.

Finally, James Lacey (Marine Corps War College) focused most of his comments on the obstacles to the use of wargames to teach strategy in professional military education. He suggested that PME institutions tend to be too rigid and structured, and discourage instructors from experiment. He also mentioned some of the criticism his critique, has received and—in typical fashion–pushed back hard. In subsequent discussion Peter noted that despite the current DoD push for more and better wargaming (inspired by the DEPSECDEF memo of February 2015), this has largely focused on analytical gaming with no clear direction from the top to more fully and effectively integrate gaming into PME.

Playing AFTERSHOCK. What is the UN so happy about?

After a Q&A period, the rest of the day was devoted to demonstration games. I ran a session of AFTERSHOCK: A Humanitarian Crisis Game. The foreign military contengents of the joint HADR-Task Force did an exceptional job of quickly repairing the damaged airport and port. A critical moment in the game came when the NGO team unintentionally delayed implementation of a water infrastructure project in District Five, only to see the area stricken soon after with a dangerous outbreak of cholera. The United Nations—possibly having learnt from its real-life experience in Haiti—already had a cholera response programme readied, and was able to both halt epidemic and provide improved water facilities to prevent future outbreaks.

The United Nations responds to the cholera emergency.

The players were headed for a well-earned victory when we had to call an end to the game for reasons of time (not to mention my need to eat before the cafe at the US Army Heritage and Education Center closed for the day).

After a quick sandwich, I also ran several turns of the ISIS Crisis matrix game. The Iraqi government sought to build on its successes earlier this year in Fallujah and Ramadi by launching a bold, Patton-esque thrust along the Euphrates Valley towards the border town of al-Qa’im—hoping thereby the sever an important ISIS line of communication and further isolate Mosul. The attack, however, was hastily organized and went disastrously wrong. Local Sunni tribes were angered that the campaign had been supported by Shiite militias rather than coordinated with them, while ISIS benefitted from both a  morale boost and the capture of significant military equipment. ISIS also plotted terrorist attacks in Iraq and abroad—one of which, aimed against NATO facilities in Brussels, was foiled in the nick of time by an alert Belgian police officer.

The failure of the operation also aggravated growing tensions between Baghdad’s Iranian and US allies. Prime Minister Haider al-Abadi used the defeat to justify a large-scale purge and reform of the Iraqi armed forces in an attempt to build a more competent and professional military. In doing so, however, he relied heavily on Iranian advice, advisors, and money—causing the US to temporarily withdraw some of its own advisors in protest. Washington also signalled its dissatisfaction with the Iraqi central government by providing the Kurdish Regional Government with heavier weapons. That, of course, only further annoyed Baghdad, which briefly closed its airspace to US aircraft. Meanwhile, Iraqi Sunni leaders were dismayed both by growing Iranian influence and by the government’s failure to deliver on its promise of a new law that would see more petroleum revenues invested in Sunni areas. Scandals and acrimony dominated the political process, and national unity seemed more distant than ever. Amidst all this, ISIS capitalized on the disarray by rebuilding its network of supporters in government-controlled areas of Anbar province.

All in all, I very heard some thoughtful commentary at the event, made new contacts, played some games, and otherwise very much enjoyed myself. I’m very grateful to MAJ Dennis Davis and his colleagues at the US AWC Center for Strategic Leadership for having me down.

UPDATE: You’ll also find a report on the event by John Carter McKnight (Harrisburg University of Science and Technology) at his blog Aporia.

Oh, and as for that song…

Like Loading...
conferences The Clash, US Army War College
← IMPACT: A Foresight Game New Chair of Wargaming Department at US NWC →

4 responses to “Clashing in the classroom”