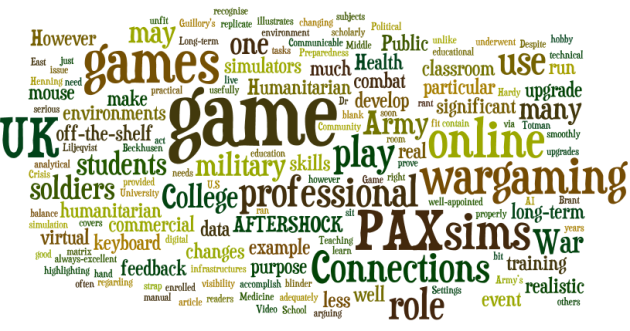 PAXsims is pleased to present some recent items on conflict simulation and serious (and not-so-serious) games that may be of interest to our readers.

I’ll be off soon to participate in the day-long public event on wargaming in the classroom at the US Army War College on August 27, followed by running a matrix game for the UK Foreign Office and then participating in the always-excellent Connections UK professional wargaming conference at King’s College London on 6-8 September. Because of that, the next “simulations miscellany” update may not be until mid-September.

A forthcoming issue of the British Journal of Educational Technology will contain an article by Matt Hardy and Sally Totman on “Teaching an old game new tricks: Long-term feedback on a re-designed online role play.”

Despite an extensive history of use in teaching Political Science subjects, long-term scholarly studies of online role plays are uncommon. This paper redresses that balance by presenting five years of data on the Middle East Politics Simulation. This online role play has been run since the 1990s and underwent significant technical upgrade in 2013–14. The data presented here covers student feedback to this upgrade process and the factors that can influence their response. Key indications are that students tend to recognise when something is fit (or not) for its purpose and will forgo attractive and well-appointed online environments if the underlying learning exercise is valued. However, there are limits to this minimalism and whilst designers do not need to replicate every Internet trend, attention needs to be paid to broader changes in technology, such as access platform and changing avenues of political communication. The study demonstrates that long-term monitoring of online role play exercises is important to allow informed changes to be implemented and their impacts properly assessed.

Public health epidemiologist (Preparedness) Dr Henning Liljeqvist has used AFTERSHOCK: A Humanitarian Crisis Game to simulate working in humanitarian settings with students enrolled in the University of New South Wales/World Health Organization course on Communicable Diseases in Humanitarian Settings at the UNSW School of Public Health and Community Medicine. The video below shows how he ran the game in the classroom.

A few of the rules were modified to make things run more smoothly (for example, regarding logistics infrastructures upgrades). Of particular note, however, was the skillful way he debriefed the game, linking game processes to real-life humanitarian experiences, highlighting where the game was more or less realistic, and challenging students to think of their own modifications via use of the blank cards provided with AFTERSHOCK.

At War is Boring, Robert Beckhusen argues that “U.S. Army Has Too Many Video Games.”

There’s just a few problems. Some of the Army’s virtual simulators sit collecting dust, and one of them is more expensive and less effective than live training. At one base, soldiers preferred to play mouse-and-keyboard games over a more “realistic” virtual room.

He is absolutely right in noting that many purpose-designed digital games and simulators get inadequate use in the military or prove unfit for their intended purpose (often for practical reasons of time, accessibility, flexibility, and so forth). There are also many good commercial off-the-shelf games that can be usefully integrated into training.

However, one has to be careful about arguing that “It’s unnecessary to strap soldiers into an immobile vehicle and make them scan a wrap-around screen if they can accomplish the same basic tasks with a mouse and keyboard.” A mouse and keyboard can be very unlike a real combat environment, and there is significant risk that soldiers will learn the skills and develop the muscle-memory to win the game—but not develop skills that translate well into actual combat environments. In many commercial games, for example, cover and visibility to not function much like the real thing, while AI opponents may act in unrealistic ways.

The use of commercial/hobby wargames in professional military education has much to commend it, as James Lacey (among others) has convincingly argued. On the other hand, professional wargaming addresses a broad array of analytical and educational purposes, not all of which are adequately served by off-the-shelf games. Moreover, while the hobby game experience can inform and contribute to professional game design and execution, it can be a bit of a blinder too if you aren’t careful.

I say all that because this current thread at BoardGameGeek on “revitalizing (manual) wargaming in the military” illustrates the tension well. In particular, read Brant Guillory’s truly epic rant on the topic. He’s right, too!