Policy Horizons Canada  (“an organization within the federal public service that conducts strategic foresight on cross-cutting issues that informs public servants today about the possible public policy implications over the next 10-15 years.”) is working with Idea Couture to develop IMPACT: A Foresight Game. According to a piece in the Huffington Post by Robert Bolton of Idea Couture:

The objective of foresight is not to predict the future, but to prepare for many futures. That’s what makes a game such an ideal medium for learning foresight thinking. In more linear formats, such as a films or novels, the narrative is static. But board games are dynamic and can generate a new scenario every time you play.

In Impact, each player takes on the role of a character with a unique job from the future and a set of preferred future conditions that will make their job secure and prosperous. Players compete to achieve their character’s preferred future world by playing Impact cards, which trigger events influencing the various domains of society. The roleplaying aspect of the game also encourages empathy as players embody characters and think from different perspectives about what it means to create a preferable future.

Like the discipline of foresight in general, Impact brings to light the rates and trajectories of change, and the potential second order effects and disruptions that might occur. For organizations, maintaining a competitive intelligence practice that formally tracks rates of social, technological, environmental, economic, and political change is part of ensuring your own resilience.

The content of the game is based on Policy Horizons Canada’s report, MetaScan 3, a foresight study that explores how disruptive technologies may shape the economy and society. So, when you’re playing Impact, you’re engaging with real life technological events that are unfolding today (such as a recent scientific discovery or the formation of a new kind of tech startup) and imagining the possible ways these events could influence society tomorrow.

Players learn about developments in fields like nanotechnology, artificial intelligence, Internet of Things, biotechnology, and robotics; and are prompted to consider their industry, environment, and policy implications.

Robert tells me they hope to launch a Kickstarter for the game in the fall. If so we’ll announce it here—and we hope to be offer a PAXsims playtest review of the game too. 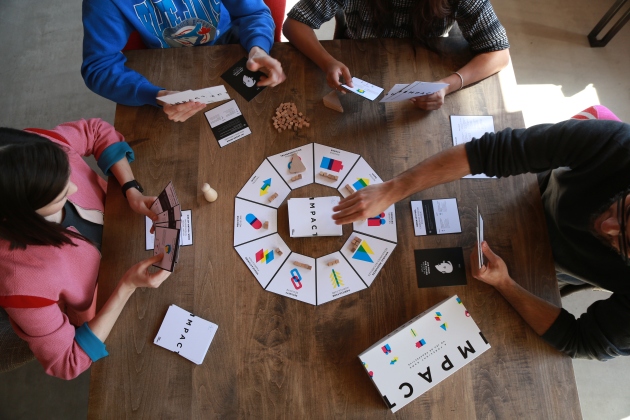 4 responses to “IMPACT: A Foresight Game”