PAXsims is pleased to present some recent items on conflict simulation and serious gaming that may be of interest to our readers.

In War on the Rocks, Karl Mueller and his colleagues at RAND (David Shlapak, Michael Johnson, David Ochmanek ) offer a spirited defence of their recent wargames that examined the vulnerability of the Baltic republics to a Russian attack:

Michael Kofman’s recent War on the Rocks essay spent much of its length critiquing RAND’s February report on the requirements for establishing a more robust conventional deterrent posture along NATO’s eastern flank. This report describes a series of wargames that we and a team of our RAND colleagues designed and ran in 2014 and 2015 to examine the potential results of a Russian invasion of the Baltic states. In aggregate, these games suggest that the permanent presence of a multi-brigade NATO armored force would likely be sufficient and might well be necessary to present Moscow with the prospect that such an attack would not result in a quick and inexpensive victory. Kofman asserts that our analysis represents “conventional wisdom,” but his piece repeats the most common arguments we’ve encountered since we began presenting this work to Pentagon audiences two years ago, reflecting what had been the standard thinking within the United States defense enterprise prior to our analysis.

In their most general form, these arguments are three in number:

There are stronger and weaker formulations of these propositions, but varieties of each are put forward by Kofman. Each contains kernels of truth, but all are ultimately unconvincing. First, while an invasion of the Baltic states appears unlikely, its consequences would be so dangerous that not taking steps to deter it more robustly would be imprudent. Second, while Moscow would dislike a stronger NATO military posture in northeastern Europe and would probably increase its own military capabilities in response, the NATO forces in question would clearly not pose a significant threat to Russian security. Finally, the presence of NATO forces capable of deterring an invasion would also contribute to deterring subconventional attacks or limited land grabs by preventing Russia from backstopping these moves with intervention by substantial conventional forces as it did in eastern Ukraine.

Well, it is good to know that potential readers at the Defence Academy are protected from the radicalizing effects of PAXsims. Or perhaps they just think we’re game-porn. 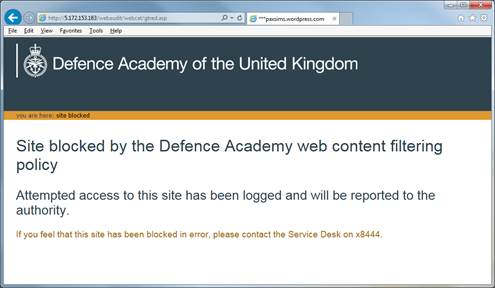 In either case, we’re blocked!

Connections Oz will be  held in Melbourne on 5-6 December 2016. For more details they become available, check their website here.

I can’t go this year, sadly—but had a great time participating in last year’s event.

As usual, there’s a lot of interesting stuff at the Defense Linguistics blog.

Ezra Sidran has launched a development blog for his proposed computer wargame, General Staff. In it he discusses the game’s design approach, AI challenges, and other issues of interest.

You’ll also find a recent interview with him here at GrogHeads.

An article by A. Ziya Aktaş and Emre R Orçun on “A real-time strategy game, “GALLIPOLI WARS,” as a centennial tribute to the Gallipoli Campaign (1915–2015)” is now available (online first) at The Journal of Defense Modeling and Simulation: Applications, Methodology, Technology.

An article at DVIDS discusses the participation of members of the US Naval Post Graduate School in “track two” dialogue of South and East Asian security and foreign policy issues—including the use of crisis simulations:

By conducting crisis-simulation games through Khan’s South Asian Stability Workshops, he has found that it is possible to take a much deeper look into how participating nations conduct diplomacy, implement policy, deploy their militaries and make economic decisions.

“The simulation exercise was designed to reinforce our theoretical understanding of India-Pakistani strategic stability with conceptual clarity. Although track II dialogues and academic conferences have been useful for developing a robust theoretical understanding of strategic stability, the South Asian Stability Workshop provides a laboratory in which theoretical hypothesis can be explored and stress-tested,” explained Khan.

But Khan left the sterile confines of the laboratory long ago. He is deliberately pushing the envelope with his Pakistani and Indian participants in an effort to observe how, or if, participants are able to de-escalate potential crises.

“We try to simulate the interplay of conventional, unconventional and nuclear warfare,” said Khan. “We create a perfect-storm situation.”

Khan notes that into that “storm” each country brings its own preconceived notions and its own diplomatic and strategic objectives.

“We place them into a narrative of their own making, giving them the option to identify the crisis and observe how they react to it over a 72-hour period,” said Khan. “It’s a very serious game. The primary focus of my research is determining how nations can de-escalate crises using these tools.”

A video report on the US naval War College’s recent battle of Jutland centenary wargame can be found on the NWC Facebook page.

Having been reported in North America, France, and Russia, our ISIS Crisis game has now shown up in the Latin American media too.

Suffragetto is a suffragettes vs. police board game published in 1908/09, and an interesting example of both a (then) topical game and the use of a game for the purposes of political advocacy and awareness

…[was] created by the militant British Women’s Social and Political Union (WPSU). The game is a contest of occupation between two opposing factions—the Suffragettes and the police—each aiming to occupy their opponent’s base while defending their own political home.

You can find out more here, here, and here (the latter including materials to make your own copy at home).

One response to “Simulation and gaming miscellany, 14 June 2016”