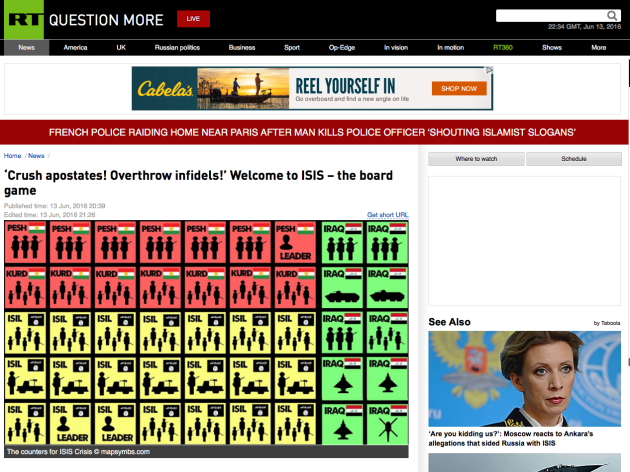 With the help of a map and a pair of scissors, you can now print out and play a board game that simulates the conflict in Iraq. Invented by an academic, it is being used by Canada’s military staff to test real-life war strategies.

The brainchild of Rex Brynen, a political science professor at Montreal’s McGill University, ISIS Crisis is not a conventional board game, with elaborate rules and many-sided dice. Rather, it is a matrix game – a structured role-play simulation in which every player has to explain and justify his next move, while the others react, and an umpire adjudicates, sometimes using a simple die roll….

In some ways it is the most detailed report yet, with images of some of the counters and briefing materials. I wasn’t interviewed—the quotes are all taken from other reporting.

Also, the usual caveats apply: ISIS Crisis was developed in conjunction with Tom Mouat, building on the matrix gaming approach pioneered by Chris Engle. The Canadian DRDC games were played  to evaluate matrix gaming methodology, and were not intended to aid in planning for counter-ISIS operations in any way.