The Chief of Staff of the Army game

The most recent Military Operations Research Society (MORS) Wargame Community of Practice “brown bag” lecture involved a presentation by Kenneth Long of the US Army Command and General Staff College on “Appreciating complexity: The Chief of Staff of the Army game.”

Dr. Long started his talk (slides here) by noting the challenge of teaching Army officers—who might be used to operating in more certain and clearly-defined contexts—about the fuzziness and uncertainty of the world at the strategic level. He argued that lecturing “at” officers was often not a very effective way or promoting critical thinking about such topics.

The game therefore emerged out of using more interactive methods to promote discussion about the role of the Army Chief of Staff and the importance of budget, investment, research, and deployment issues. In it, players make decisions about investing and maintaining various types of force, and potentially forward deploying these to several different strategic theatres. Different forces have different costs, and different capabilities in different environments (major combat, irregular warfare, peacetime operations). There are also costs associated with building and refitting forces, deploying and maintaining these, investing in research & development, and gathering intelligence about the opponent’s interests and assets. A commercial version of the game—Future Force (2011), designed by Jim Lumsford—is available from HPS Simulations. 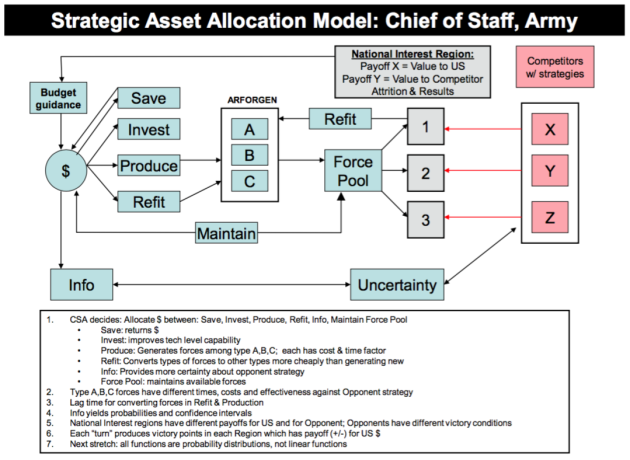 In addition to the slides linked above, this article from Developments in Business Simulation and Experiential Learning 38 (2011) provides a very good overview:

When Army officers are promoted to the rank of Major, they become field grade officers with the responsibility of planning, organizing and leading large unit formations, working on high level staffs and running the Army day to day. The “Future Force” game is an experiential learning simulation designed to introduce them to the complexity of supporting the current force in its world-wide missions while simultaneously designing and shaping the force for all possible mission profiles for the next 20 years. Played early in their change management curriculum, the game provides a common frame of reference for further detailed technical lessons. This paper describes the game design process from conception to application. 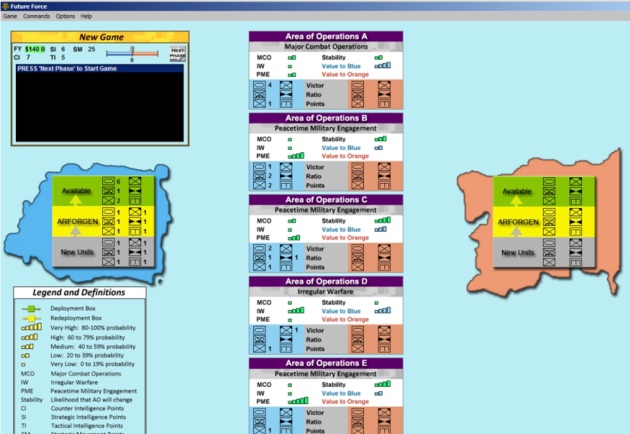 I was particularly impressed by the explicit way in which he addressed curriculum integration and practical constraints such as available time (a point I’ve often made myself). 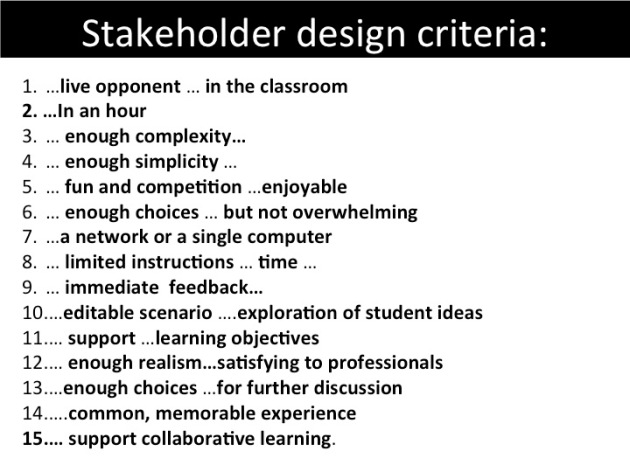 All-in-all it was an excellent presentation, and it is a shame there was not more time to discuss it.

(UPDATE: Added link to commercial version of the game.)

International humanitarian crisis simulation at the University of Minnesota

The University of Minnesota will be holding a three day field/simulation-based course on humanitarian assistance on 9-11 September 2016 in Canon Falls, MN.

The first portion of the course consists of interactive sessions that provide an overview of the field of humanitarian aid work. Participants are then divided into interdisciplinary teams representing multiple emergency response teams (ERTs). ERT must apply their skills and knowledge to assess a fictional area experiencing a humanitarian crisis. Teams are expected to develop a plan to address the many problems of the region, including malnutrition, poor infrastructure, insecurity and violations of human rights. ERTs will experience living conditions that are common for professionals working in these conditions.

You’ll also find a StarTribune article on the simulation here.