More reflections on a megagame

The following thoughts were contributed by Vince Carpini, Science Control during the recent New World Order 2035 megagame. You can read my own reflections on the game here.

Then the Science Gets Done, and Everybody has Fun

Rex has been kind enough to open PaxSims to further commentary from the NWO 2035 megagame Control team, and I am happy to share my own observations.

Full disclosure: I am a hobby gamer and have little serious games experience. While I don’t think this was a drawback for NWO 2035, it does frame my perspective.

As Science Control, my role was to manage and (gently) drive the R&D aspect of the megagame. Players in the Scientist role are crucial, as they enable teams to research technological advancements that provide a variety of game effects, from hunter-killer satellites and military cyborgs to the cure for cancer and flying cars … and yes, even the game-changing Mycroft AI.

Scientists hold a press conference to warn of the dangers of sentient AI.

In NWO 2035, most teams do not have a Scientist, and so must vie for the attention and assistance of a limited pool of ‘International Scientific Geniuses’ – in our game, there were six Scientists for 15 country teams (the Holy See and the four Corporations each had a dedicated Scientist). For their part, the Scientists are also engaged in a separate ‘mini-game’ wherein they aim to make the most impressive discoveries, win the acclaim of their peers, and ultimately be recognized as the Greatest Scientist Ever.

Like most of our participants, the majority of the Scientists were not gamers, and this presented a challenge: like virtually everything else in the megagame, the role requires player initiative – but without the backing and advice of a team. Fortunately, the Scientists rose immediately to the occasion, taking full advantage of their independence to work with different teams throughout the game, they shamelessly promoted their own work, stole credit for others’ efforts and bitingly undercut their rivals. All of this was expected and encouraged. 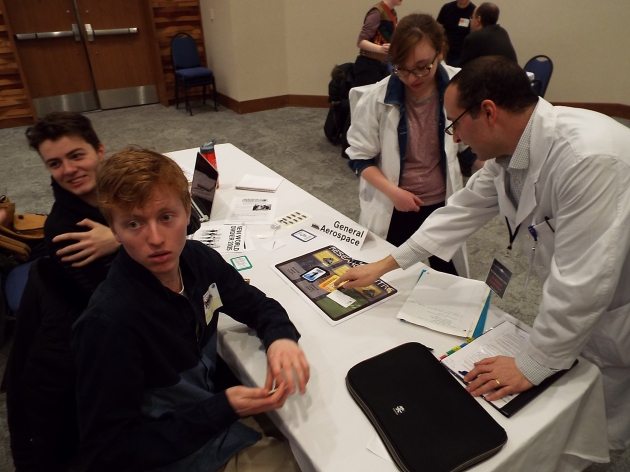 Selling science to the highest bidder.

Quite unexpectedly however, the players spontaneously adopted a sense of responsibility as the Smartest People in the World. Each turn, the Scientists withdrew to a closed-door Conference, where they presented their work and competed for awards and prizes. On several occasions, the established agenda was ignored in favour of entirely player-driven discussions about how the Scientists could help to address the larger problems that plagued the near-future world. Global Warming was of particular concern, and several Scientists became very active in international efforts to address the phenomenon (in one case, two Scientists skipped a Conference because they had been invited to speak on the topic at the UN). I found the way in which this small group of largely-inexperienced players chose to expand their role within the confines of the larger game to be very interesting.

I share Rex’s opinion that the game was quite successful, and I agree that there are some refinements to be made for future megagames. Speaking specifically to Science:

Who cares about the effect on the future of humanity when you can win science awards—and genetically re-engineer dinosaurs!

I feel very fortunate to have helped facilitate New World Order 2035, and I learned a great deal about game design and management from Rex, Jim and Tom Fisher. I look forward to another megagame in 2017!