Matrix games at the US Army War College

Dr. Rex Brynen of McGill University in Montreal, Canada recently delivered a presentation on “Conflict Simulation and Gaming in the Classroom” at the Royal Military College of Canada in Kingston, Ontario. During the workshop, Dr. Brynen introduced us to Matrix Games. He also moderated “ISIS Crisis,” a Matrix Game on the rise of ISIS set in the summer of 2014. Matrix Games have the potential to enhance experiential education in both wargaming and Professional Military Education (PME).

A Matrix Game is a low-overhead, facilitated, multi-player, argument-based game where players propose actions, weigh arguments and counter-arguments, and a die roll decides success or failure. Matrix Games typically last 2-3 hours and require a scenario with map and counters, a facilitator/umpire, a subject matter expert, and 4-6 players or teams of players. Matrix Games can be created on any topic, however the focus of this article is on strategic geopolitical crisis Matrix Games.

Chris Engle created Matrix Games in the late 1980s. He wanted to develop a game system in which it was possible for a player to role-play an entire country, but that did not have extensive rules, unit counters and combat results tables (like most wargames).[1] He based his system on roleplaying games, using a free-play framework where players propose actions, state their desired effect, and then posit arguments in support of why they believe the proposed action will succeed (other players may offer counter-arguments). Initially his games included a matrix of cue words, although over time the matrix was dropped, but the name stuck.[2] For additional information on Matrix Games, as well as free Matrix Games, see:

Subsequently, the Strategic Simulations Division at the Army War College hosted its first Matrix Game demonstration session on December 10, 2015 for staff members of the Center for Strategic Leadership. The purpose of the demonstration was to provide an overview of Matrix Games and their potential for use as an additional wargaming method. The War College hosts several strategic wargames a year, using the two-sided seminar format. In ISIS Crisis, the participants represent one of six sides: the United States, Iran, Iraqi Government, Sunni minority, Iraqi Kurds, and ISIS. Prior to the game, each team was provided team-specific background information, objectives, and a special rules card explaining rules unique to each side.

AUTHOR’S NOTE: The purpose of the ISIS Crisis demonstration described below was to inform staff members on the Matrix Game methodology, not to formulate policy or strategy. Player actions do not reflect official policy of the Department of the Army, Department of Defense, or the U.S. Government.

At the end of the strategy and diplomacy phase, each team announced the results of any negotiations (if they chose to). The United States team used the opportunity to announce a “four point” strategy for defeating ISIS. The final point of the strategy was support for a confederation system of government in Iraq, rather than continuing to support the Shia-dominated “unity” government. This announcement both surprised and immediately impacted the other players, especially the Iraqi, Iranian, Sunni minority and Kurdish teams.

The US team’s policy announcement set the tone for the game. The US built on its policy announcement by conducting a strategic information operations campaign to discredit ISIS and reduce its ability to recruit foreign fighters. Following a successful ISIS attack into Kurdish controlled Hasakah province and a successful Kurdish counter-offensive into Mosul, the US team deployed a significant aid package to the Kurds, in the form of air support, advisors, equipment and funding. Iraq interpreted the US policy statement and its direct support of the Kurds as destabilizing and sought to conduct reforms to increase minority representation in Parliament and its Ministries. The reform movement failed however, and the predominantly Shia Iraqi government faced the situation of a US-backed and resurgent Kurdish minority, combined with a now disenchanted Sunni minority leaning toward ISIS. The Iraqi Government responded by publicly appealing for military support. Iran responded to the call by announcing it would deploy ground forces into Iraq to help combat ISIS (the Iraqi and Iranian teams struck this secret deal during the diplomacy phase, unknown to the facilitator and the other players). 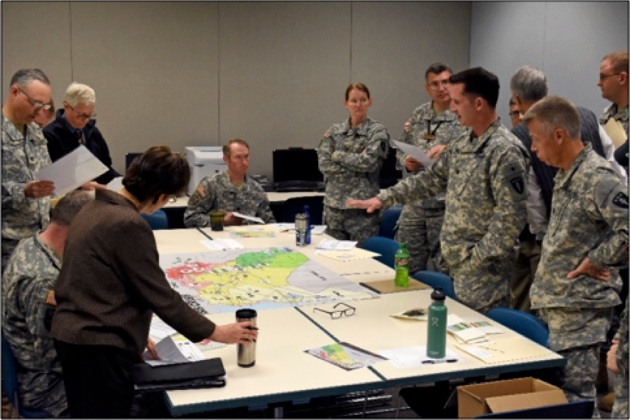 The US continued its diplomatic efforts to defeat ISIS by approaching the Gulf Cooperation Council (GCC) countries and asking them for help in cutting off funding for ISIS, then announced their own version of the 2014 Iranian Nuclear Deal, with a caveat that allowed Iran to deploy into Iraq to help fight ISIS. This deal effectively divided Iraq into a three-party state by driving the Sunni minority toward ISIS and further reinforcing Kurdish autonomy. ISIS and the Sunni minority successfully took Tikrit, then Fallujah, while Iranian forces deployed into Najaf, Karbalah and Samarra. ISIS then successfully conducted a covert operation in Samarra, destroying several Sunni mosques with explosives, and blaming Iranian forces. This event further strengthened the fissures between the Iraqi Government, the Sunnis and the Kurds. The Iraqi government attempted to gloss over the situation by conducting a “One Iraq” strategic communication campaign, but it did not reflect reality on the ground and was ignored by the other players. The game ended with Iraq in control of its Shia regions with significant Iranian ground forces, ISIS in control of the Sunni regions, including Tikrit and Fallujah, and the US-backed Kurds firmly in control of the Kurdish region. The new US policy announcement and the clever Iranian deals with the US and Iraq effectively created a three party Iraq. A by turn summary of all player actions as recorded is at the end of this article.

The after action review with the players, who were a mix of wargaming and research analysis experts, yielded several insights. Collectively the players thought that Matrix Games could be most beneficial before or during (or even in place of) the prevalent two-sided seminar wargaming method. They felt that the Matrix Game method better promoted participation and engagement among the players. The analysts felt that Matrix Games provided more quantitative data to collect due to the increased interaction, as well as more qualitative data in the form of the supporting arguments and the die rolls. All players thought that Matrix Games would be best for current or future (potential) conflicts to avoid participant knowledge of historical scenarios. They did acknowledge that historical scenarios could be used for Matrix Games to gain insights and understanding into why actors behaved as they did in historical conflicts.

Finally, ISIS Crisis demonstrated the potential utility of Matrix Games in policy and strategy formulation. National Security practitioners could conduct multiple iterations of a Matrix Game, testing a different policy or strategy approach in each one, to gain insights into how the various parties may react. For example, had this game been a test of a “confederation Iraq” policy, the US team would likely discard that policy course of action due to the implications vis-à-vis Iran, the Sunnis and the Kurds.

Since this ISIS Crisis demonstration, we briefed the War College Commandant and began to design our own Matrix Games. We plan to provide the War College faculty training on the use of Matrix Games as another tool in their instructor “toolkit” and look forward to providing future strategic leaders an additional experiential education experience during their time here at Carlisle Barracks.

The views expressed in this article are those of the authors and do not necessarily reflect the official policy of the Department of the Army, Department of Defense, or the U.S. Government.

COL Jerry Hall is an Army Simulations Officer and the Director of the Strategic Simulations Division, Center for Strategic Leadership, US Army War College. He can be reached at jerry.a.hall.mil@mail.mil

LTC Joseph Chretien is an Army Simulations Officer assigned to the Strategic Simulations Division. He can be reached at joseph.c.chretien.mil@mail.mil