RAND: Wargaming the Defense of the Baltics

David A. Shlapak and Michael W. Johnson of RAND have just released a report entitled Reinforcing Deterrence on NATO’s Eastern Flank: Wargaming the Defense of the Baltics. The study is based on a series of wargames conducted between summer 2014 and spring 2015 that examined a possible near-term Russian attack on the Baltic states:

The games’ findings are unambiguous: As currently postured, NATO cannot successfully defend the territory of its most exposed members. Across multiple games using a wide range of expert participants in and out of uniform playing both sides, the longest it has taken Russian forces to reach the outskirts of the Estonian and/or Latvian capitals of Tallinn and Riga, respectively, is 60 hours. Such a rapid defeat would leave NATO with a limited number of options, all bad: a bloody counteroffensive, fraught with escalatory risk, to liberate the Baltics; to escalate itself, as it threatened to do to avert defeat during the Cold War; or to concede at least temporary defeat, with uncertain but predictably disastrous consequences for the Alliance and, not incidentally, the people of the Baltics.

Fortunately, avoiding such a swift and catastrophic failure does not appear to require a Herculean effort. Further gaming indicates that a force of about seven brigades, including three heavy armored brigades—adequately supported by airpower, land-based fires, and other enablers on the ground and ready to fight at the onset of hostilities—could suffice to prevent the rapid overrun of the Baltic states. While not sufficient to mount a sustained defense of the region or to achieve NATO’s ultimate end state of restoring its members’ territorial integrity, such a posture would fundamentally change the strategic picture as seen from Moscow. Instead of being able to confront NATO with a stunning coup de main that cornered it as described above, an attack on the Baltics would instead trigger a prolonged and serious war between Russia and a materially far wealthier and more powerful coalition, a war Moscow must fear it would be likely to lose.

Crafting this deterrent posture would not be inexpensive in absolute terms, with annual costs perhaps running on the order of $2.7 billion. That is not a small number, but seen in the context of an Alliance with an aggregate gross domestic product in excess of $35 trillion and combined yearly defense spending of more than $1 trillion, it hardly appears unaffordable, especially in comparison with the potential costs of failing to defend NATO’s most exposed and vulnerable allies—that is, of potentially inviting a devastating war, rather than deterring it.

The games indicated that lighter and foot-mobile forces could not be expected to substantially slow Russian heavy armour—and that NATO, as currently deployed, has no heavy armour positioned  in the Baltics or able to reach them quickly. NATO airmobile forces can mount a stiff defence in major urban areas, but likely at the cost of high collateral damage. While NATO airpower could inflict substantial damage on Russian forces, it would not be able to do enough damage to slow their advance, not would it be able to establish sufficient air superiority prevent the Russian air force from mounting substantial localized air operations against NATO reinforcements (especially given weaknesses in the organic air defence of US formations).

The game itself was conducted as follows:

The general game design was similar to that of traditional board wargames, with a hex grid governing movement superimposed on a map. Tactical Pilotage Charts (1:500,000 scale) were used, overlaid with 10-km hexes, as seen in Figure A.1 [below]. Land forces were represented at the battalion level and air units as squadrons; movement and combat were governed and adjudicated using rules and combat-result tables that incorporated both traditional gaming principles (e.g., Lanchester exchange rates) and the results of offline modeling. We also developed offline spreadsheet models to handle both inter- and intratheater mobility. All these were subject to continual refinement as we repeatedly played the game, although the basic structure and content of the platform proved sound. 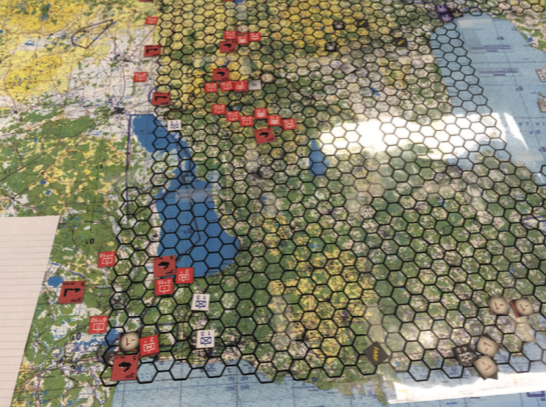 Orders of battle and tables of organization and equipment were developed using unclassiffed sources. Ground unit combat strengths were based on a systematic scoring of individual weapons, from tanks and artillery down to light machine guns, which were then aggregated according to the tables of organization and equipment for the various classes of NATO and Russian units. Overall unit scores were adjusted to account for dfferences in training, sustainment, and other factors not otherwise captured. Air unit combat strengths were derived from the results of offline engagement, mission, and campaign-level modeling.

They also note that “full documentation of the gaming platform will be forth- coming in a subsequent report.” We’ll look forward to reading more.

7 responses to “RAND: Wargaming the Defense of the Baltics”