How not to learn about the slave trade

PAXsims researcher Christian Palmer spotted this particular gem: Playing History 2: Slave Trade, an apparently serious game by the Danish company Serious Games Interactive. In it you get to play the exciting role of a black cabin boy on a European slave ship. Fun, fun, fun!

The video trailer is truly cringeworthy.

Among the amusing game puzzles is a sort of “slave Tetris” where you try to pack slaves into the cargo hold. 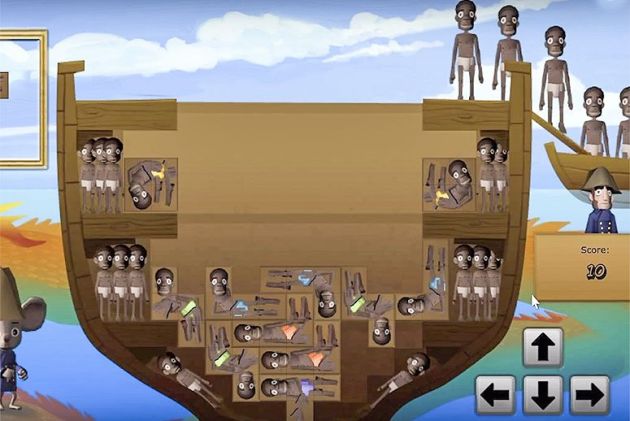 You’ll find a video play-through on YouTube here (slave Tetris at around the 29:00 mark).

I would like to think this is all some cunning piece of performance art akin to Train, meant to satirize both trivializing atrocity and the idiotic fringe of the educational game market—but apparently not. Indeed, it is for sale at the moment in the Steam store:

Travel back in time and witness the horrors of slave trade firsthand. You will be working as young slave steward on a ship crossing the Atlantic. You are to serve the captain and be his eyes and ears. What do you do, when you realize that your own sister has been captured by the slave traders?

As an article in Takepart notes, the game has provoked quite a bit of understandable outrage. The developers have removed the “slave Tetris” part of the game, but otherwise continue to market it. I look forward to their cutesy game of the Holocaust, or some similar mass atrocity. 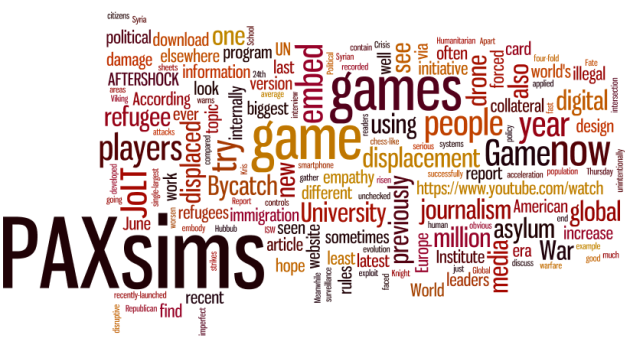 Some recent items on simulation and serious (and not-so-serious) gaming that may be of interest to PAXsims readers. Nikola Adamus assisted with this latest edition.

Bycatch is a card game about drone warfare by Subalekha Udayasankar and Hubbub studio in which players use their own imperfect smartphone pictures of an opponent’s cards to try to decide which to target for assassination—with an obvious risk of “collateral” damage by attacking the wrong card. According to the Bycatch website:

In Bycatch, each player controls a nation on the hunt for suspected terrorists. The players try to locate suspects hiding abroad using drone surveillance, and eliminate them using drone strikes. Meanwhile, they must shelter their citizens from the attacks of their opponents. Who will gather the most accurate intelligence and strike with the least collateral damage? 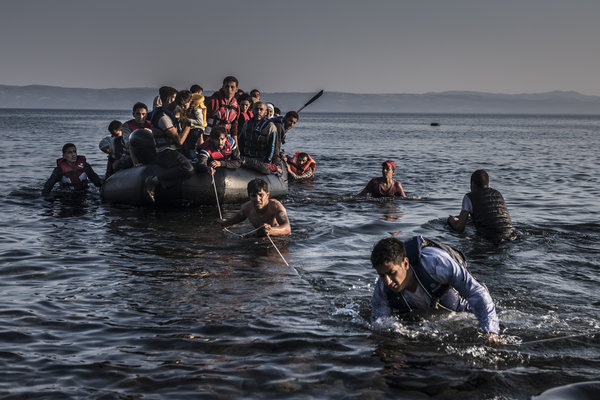 According to the United Nations, the world is currently faced with the largest refugee crisis of the post-WWII era:

GENEVA, June 18 (UNHCR) – Wars, conflict and persecution have forced more people than at any other time since records began to flee their homes and seek refuge and safety elsewhere, according to a new report from the UN refugee agency.

UNHCR’s annual Global Trends Report: World at War, released on Thursday (June 18), said that worldwide displacement was at the highest level ever recorded. It said the number of people forcibly displaced at the end of 2014 had risen to a staggering 59.5 million compared to 51.2 million a year earlier and 37.5 million a decade ago.

The increase represents the biggest leap ever seen in a single year. Moreover, the report said the situation was likely to worsen still further.

Globally, one in every 122 humans is now either a refugee, internally displaced, or seeking asylum. If this were the population of a country, it would be the world’s 24th biggest.

“We are witnessing a paradigm change, an unchecked slide into an era in which the scale of global forced displacement as well as the response required is now clearly dwarfing anything seen before,” said UN High Commissioner for Refugees António Guterres.

Since early 2011, the main reason for the acceleration has been the war in Syria, now the world’s single-largest driver of displacement. Every day last year on average 42,500 people became refugees, asylum seekers, or internally displaced, a four-fold increase in just four years.

Hundreds of thousands of refugees have sought to reach Europe so far this year to claim asylum, often via a dangerous across the Mediterranean or through other equally risky smuggling routes, where they are prey to criminal gangs of human traffickers.

In Europe, far-right political parties exploit the migration issue to incite fear and win support. Donald Trump has done much the same in the current US Republican primary campaign, using alarmist and even racist rhetoric about illegal immigration from Mexico and elsewhere.

Given all that, a recent article by Sonja Gabriel in the Journal of Comparative Research in Anthropology and Sociology 6, 1 (Summer 2015) on “Serious games – How do they try to make players think about immigration issues?” is particularly timely. She warns that such games have the potential to misinform as well as inform:

Immigration has become a popular topic for digital games, most of them wanting players to empathize with (illegal) immigrants. There are different game elements that can be used to embody empathy and having a look at different games one can see that they are sometimes more successfully applied, sometimes less. Apart from empathy these games often try to teach facts and information, but also (unintentionally) convey misconceptions and/or political messages. This article is going to look at various examples of digital games discussing and comparing these areas.

For one very good example of such a game, see the BBC’s Syrian Journey, previously discussed at PAXsims (here and here).

PAXsims has previously mentioned the ISIS global strategy wargame conducted in February and March by the  Institute for the Study of War. In the video below, Harleen Gambhir of ISW discusses some of the game’s key findings.

PAXsims has also previously reviewed the digital game Fate of the World, which explores the challenges of global environmental policy. A new version of the game is now being developed for online play: you’ll find the developer blog at Soothsayer Games.

At War is Boring they discuss Hnefatafl, chess-like the Viking game. They also interview Kris Wheaton, who knows a thing or two about the topic.

Mat Parker has designed simple classroom simulation of British colonial settlement of the Americas, and uploaded it to Prezi. You’ll find it here. It uses a combination of initial choices about expenditures, supplies, and other factors with a later “choose your own adventure” type resolution.

A similar approach, of course, could be used for a great many issues.

JoLT is a project of the American University Game Lab, which has received a $250,000 seed grant from the James L. Knight Foundation to explore the intersection of journalism and game design:

What is JoLT?
First and foremost, JoLT is a verb. This American University School of Communication initiative will catalyze the evolution of journalism by developing new media leaders who will disrupt the status quo. Game design theory and systems thinking are the foundation of the Journalism Leadership Transformation program.

How will JoLT work?
Fellows in the program, people who understand how games work, will apply those theories to redesigning how media, journalism and information is gathered, produced and shared with an engaged public. We hope to create the next disruptive media leaders.

You’ll find more on the initiative here, and JoLT’s recently-launched website can be found here.

We’ve uploaded the latest versions of the AFTERSHOCK: A Humanitarian Crisis Game rules (version 5.02) and Carana briefing sheets to The Game Crafter store. These contain a few typo fixes and clarifications, but no major changes. They are free to download.

Also, thanks to Bartosz Bolechów of the Institute of Political Science at the University of Wroclaw, you can now download a Polish translation of the AFTERSHOCK rules via BoardGameGeek.

And last by no means least: Connections UK 2015 is fast approaching (8-10 September, King’s College London). We hope to see you there!