Some recent items on conflict simulation and serious gaming that may be of interest to PAXsims readers:

When comparing alternative courses of action, modern military decision makers often must consider both the military effectiveness and the ethical consequences of the available alternatives. The basis, design, calibration, and performance of a principles-based computational model of ethical considerations in military decision making are reported in this article. The relative ethical violation (REV) model comparatively evaluates alternative military actions based upon the degree to which they violate contextually relevant ethical principles. It is based on a set of specific ethical principles deemed by philosophers and ethicists to be relevant to military courses of action. A survey of expert and non-expert human decision makers regarding the relative ethical violation of alternative actions for a set of specially designed calibration scenarios was conducted to collect data that was used to calibrate the REV model. Perhaps unsurprisingly, the survey showed that people, even experts, disagreed greatly amongst themselves regarding the scenarios’ ethical considerations. Despite this disagreement, two significant results emerged. First, after calibration the REV model performed very well in terms of replicating the ethical assessments of human experts for the calibration scenarios. The REV model outperformed an earlier model that was based on tangible consequences rather than ethical principles, that earlier model performed comparably to human experts, the experts outperformed human non-experts, and the non-experts outperformed random selection of actions. All of these performance comparisons were measured quantitatively and confirmed with suitable statistical tests. Second, although humans tended to value some principles over others, none of the ethical principles involved—even the principle of not harming civilians—completely overshadowed all of the other principles.

Whether it be bombs going off at the Boston Marathon finish line or a D.C. sniper on the loose, the country’s top decision-makers are tasked with keeping the U.S. safe from any and all national security threats. Now, law students are being prepped to deal with hot seat situations, too. At least that was the goal of a two-day simulation at the Georgetown University Law Center last weekend that asked students to use law, politics and public opinion to mitigate a threat.

A total of 80 law students from nearly a dozen law schools participated the National Security Crisis Law Invitational, a simulation developed by Laura Donohue, director of Georgetown’s Center on National Security and the Law, eight years ago.

“There is a lot about how we teach in law school that doesn’t work for students who are jumping into national security law,” Donohue said in an interview with The National Law Journal. “We teach the law as it is written, not how it is applied. Law is one of many competing considerations during a national security crisis. How do you talk with policymakers? How do you bring the law into the conversation?”

Donohue said that she created the simulation as a way to help students understand how best to apply the law during real world, high-pressure crises. It’s in these stressful times that your gut reaction has to be the right one. Your actions have consequences.

Leading up to the National Security Crisis Law Invitational, students spend several months hitting the books on national security law, as their performances on Georgetown’s campus are accessed by highly regarded national security experts, including James Baker, chief judge of the U.S. Court of Appeals for the Armed Forces, and Rosemary Hart, special counsel in the U.S. Department of Justice’s Office of Legal Counsel.

Teams acted as departments within the National Security Council and were paired with mentors with a background working within the agency students were assigned. 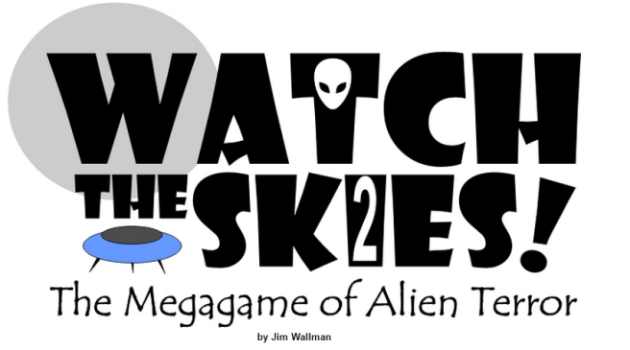 What can the UN learn from a game about aliens? Mark Turner reports on the recent Watch the Skies 2: The Megagame of Alien Terror held in London. 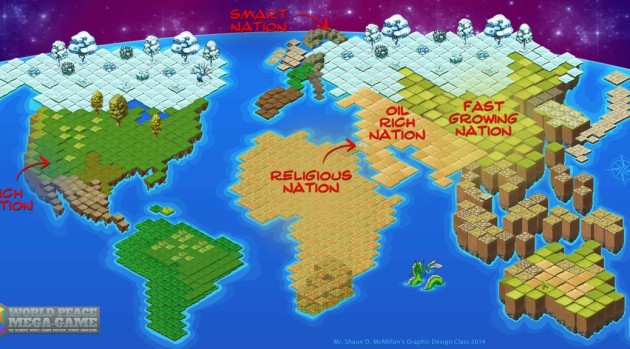 Watch the Skies! and John Hunter’s Peace Game have inspired high school teacher Shaun Macmillan and his students to develop their own political science game, Alliance: World Wide Crisis. Follow the link to find out more.

Phli Sabin (King’s College London) was featured as designer of the month on BoardGameGeek in March:

Mr. Sabin has been a wargamer for over 40 years, and became Professor of Strategic Studies at King’s College London’s War Studies Department. Over the past 20 years, he has published several board games on ancient warfare through the Society of Ancients. In 2007, his book Lost Battles was published, reconstructing three dozen different ancient battles using a common rules system. A deluxe board game edition was published by Fifth Column Games in 2011. In 2012, his book Simulating War was published, containing eight different simple wargames which he has used in his military history classes. One of these (Hell’s Gate) was published in a deluxe edition by Victory Point Games in 2013, and VPG has just published a second game from the book (Angels One Five).

Besides using wargames to help his BA students to understand conflict dynamics, since 2003 Mr. Sabin has been teaching a very innovative MA option module in which students design their own simple board games of past conflicts of their choice. Many of these are available for free download (Google ‘Sabin consim’). He also writes regularly for Battles magazine, and works closely with defense wargamers in the UK and overseas.

For discussion of his design philosophy and views on conflict simulation, see the thread here.

Engadget has an article about a proposed digital game intended to promote greater understanding and empathy between Israelis and Palestinians.

Navit Keren grew up in Israel. She’s lived through the signing of historic peace treaties, and horrific terrorist attacks. Just as important though, she’s witness to the dramatic deterioration of the relationship between Israelis and Palestinians. The biggest problem she sees, is a lack of empathy. Those living on the other side of the divide are not people, but enemies. “Others” to be feared and hated. Her effort to bridge the gap between the two sides is a pretty novel one: a location-based game. Welcome to the West Bank is merely a working title, but it gets right to the heart of the game. Israeli citizens, primarily teenagers, would play as Palestinian teenagers living in the West Bank. Basically she’s asking people to walk a mile in someone else’s virtual shoes.

Right now, there is no prototype, only screen mockups and ideas about game mechanics. The most important part is creating a “sincere and appealing narrative” that will help someone understand the experience of being on the other side of this seemingly intractable conflict. A lot of that means lifting directly from the personal stories of Palestinian youth. As you move through the world you’re offered information about the city you’re virtually visiting, landmarks and historical figures. But eventually you’ll be presented with a choice. Like this passage ripped straight from one Palestinian teen’s personal experience:

You are interrogated because of a suspicion of teaching boys in your village how to build Molotov Cocktails, which you deny. During the interrogation you are kept in a room that stinks of feces and rotten food. You are hit with a chair and threatened with a knife. You are also told that if you did not admit to the charges against you that you would be “taken to an electric chair to help you.”

You’ve already been held for 30 days, and your options are falsely confess and be released, or deny the charges and be held for 10 more days. And your choice will impact future events. If you admit guilt you’ll be placed under house arrest, be unable to attend school and therefore won’t graduate.

The game, however, is only in the concept stage—there’s no actual playable prototype yet.

By contrast, Gaza Man is available for download (Android) or online play. In the game the player assumes the role of a Palestinian fighter defending Gaza against an Israeli invasion. Not surprisingly, that’s made it popular in Gaza, and controversial within Israel.

Google briefly removed the game from its Play Store after complaints, but later restored it following complaints about its removal.

The game itself is pretty standard arcade-type shooting game. It only involves combat between opposing military forces, and no attacks on civilians or any other form of terrorism. Other than a red kaffiyeh worn by “Gaza man,” it also avoids strong political symbols or ethno-religious stereotypes. The game’s introduction shows the hero initially coming to the defence of a Gazan family being harassed by Israeli troops.

For information on other digital games that examine the Arab-Israeli conflict, see these PAXsims reports:

The next issue of Yaah! magazine by Flying Pig Games will feature two abstract Brian Train games, both on the general theme of insurgency:

In UPRISING, the State knows where the rebel units are, but not what they are– violent radicals, passive sympathizers, or simply shadows? The Rebels must misdirect the State to buy themselves the time to build a loose-knit network born of popular unrest into a force capable of declaring open revolution– but will they overthrow the current regime, or be crushed?

In ARMY OF SHADOWS, both players have their own map and set of counters– but only the Insurgent Player knows for sure where his units are located. It’s a tense and desperate race as the State tries to find and destroy the insurgency before the army of shadows can seize the capitol.

The Polish gaming magazine Tactics & Strategy may publish a wargame of the crisis in the Ukraine, Mariupol 2014-15.

The folks at Red Team Journal remind you the “Mind the Gap“—that is, the gap between your model and assumptions, and the real thing.

GMT Games will soon be publishing Labyrinth II: The Awakening, 2010 – ?, an expansion set by Trevor Bender that updates Volko Ruhnke’s very successful Labyrinth: The War on Terror, 2001 – ? game to the post-Arab Spring era. For more on the expansion and the issues it addresses, see Trevor’s comments on the GMT blog. For the original game, see our PAXsims review here.

What’s a GrogCast? It’s the new podcast by our friends at the wargaming site GrogHeads!