Recently, students from my POLI 450 (Peacebuilding) class played a modified version of the Afghan Provincial Reconstruction game. The game itself is quite abstract, and shouldn’t be seen as modelling Afghanistan with any granularity or fidelity—as you’ll see below, simulated Afghanistan (unlike the real version) turned out to be a glowing success story, almost a Singapore of Central Asia. In this regard, the whole thing was a bit of an idyllic COIN clear-hold-build fantasy, and I need to tweak the game more to make it harder.

However, the real point of the exercise was to examine the challenge of coordination across multiple actors (Afghan government, NATO, international NGOs)., and for that purpose it served very well. In the original version, the impact of the Taliban is depicted purely through random event cards; in the modified version they are represented by an active team.

The account below (and several of the photographs) are provided by one of the students involved, Isabelle Dufresne-Lienert.

Eighteen McGill students met up in the Interuniversity Consortium for Arab and Middle Eastern Studies (ICAMES) building on Saturday, 14th of March, to reconstruct Afghan—in the simulated form of a boardgame.

The reconstruction process had a very rough start. With a lack of investment in key sectors like agriculture and health, we saw a cholera outbreak in Kandahar and famines in Khost and Kunar, setting the stability in the country to an all-time low.

After a brutal winter, the Afghan president announced a “Spring of Hope” and launched a major (although costly) anti-corruption campaign. Some actors at first were wary of such a large investment, arguing that they had a more immediate need for resources. However, local critics decided to focus on their more pressing problems rather than to start a dispute with Kabul. The Taliban shook the hearts and minds of the population with the major bombing of an NGO development project, using a video of the events as propaganda which garnered extra local support for them. With resources from drug smuggling and high opium prices, the Taliban were also able in these months to establish a major base of operations in Kandahar, destabilizing the province. Overall, weak rule of law and a growing resentment of the large foreign presence in the provinces kept the Afghan situation in a situation of grave instability during this disappointing spring.

With Kandahar so badly affected, a major surge of resources was planned for the Summer. This helped the province to invest in building up the local governance capacity. A major investment was also made by NATO and Afghanistan into establishing security in the province. This prevented several major Taliban attacks. Still, the “fighting season” was filled with heated combat: the Afghan Army successfully defeated a coordinated attack in Kunar and NATO protected a local shura from intimidation. On the other hand, bombs went off damaging a local sanitation project and a Taliban suicide bomber destroyed a CIA outpost, an attack funded by diverting aid. 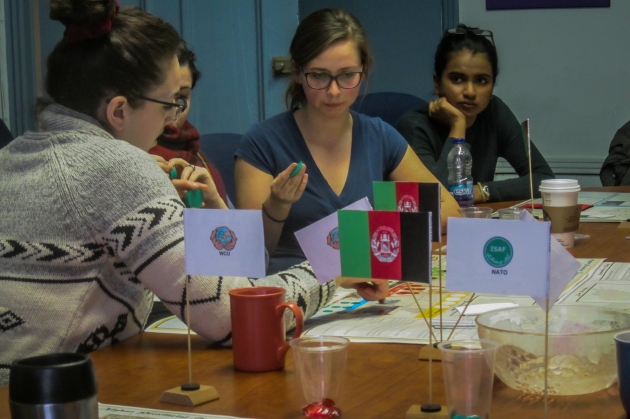 While the resilience of the projects was being built up, stability slowly increased throughout the Fall thanks to effective security services. With local governance continuously being reinforced, a number of potentially disastrous events were avoided, such as the diffusion of tensions between local leaders in Khost and the foiling of an attempted terrorist attack on security forces. However, many events brought the reconstruction process back a step; a local warlord pledged support to the Taliban, allowing them to establish a post in Kunar; local projects were attacked twice, devastating the work of the NGOs. Overall, however, aid efforts continued to have a positive outcome, contributing to the stability of the state.

Throughout the second year, strengthened security services in the country countered attack after attack from the Taliban. After only a few drawbacks caused by foreign mishaps and attacks, all projects had been completed. Thanks to successful project development and strong local governance, things were looking bright; stability in Afghanistan was at an all-time high and reconstruction was successful. 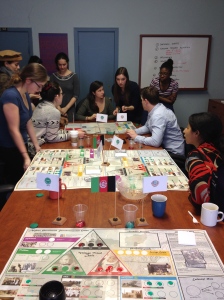 What lessons are learned from what happened in this particular simulation?

In the end, we can happily say that Afghanistan was successfully rebuilt with all projects developed thanks to a great strategy for reconstruction… and to the fact that the Talibans were really bad at rock, paper, scissors (the system used to resolve attacks and combat).