Review: Fire in the Lake 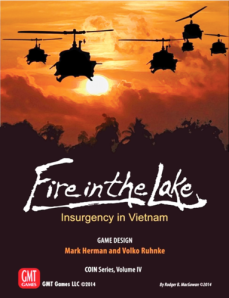 Last night the PAXsims review crew got together to play Fire in the Lake, the fourth and latest in GMT Games’ COIN series. The game covers the Vietnam war from 1964 through to 1972, with players representing the United States (US), North Vietnamese forces (NVA), the Republic of Vietnam forces (ARVN), or the Viet Cong (VC). Rules for play with less than four players (including solitaire play) are included. It plays more easily with two players than others in the series.

The card- and map-based game system is very similar to that used in the previous games in the series, Andean Abyss (insurgency in Colombia), Cuba Libre, and A Distant Plain (contemporary Afghanistan). Given that we’ve already discussed that system extensively in past reviews I won’t say much more about it here, other than to highlight some of the ways in which it has been customized for the Vietnamese case: 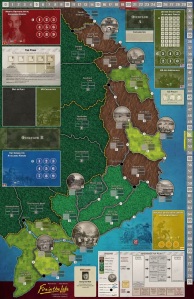 As with all of the games in the series, I had some relatively minor quibbles with how some of the operations are constructed. Air strikes seemed somewhat overpowered, especially in urban and jungle terrain. Our NVA player was not a fan of how his “infiltrate” operation worked. I’ve never liked the way in which pacification and the building of domestic support is a derivative of the “training” operation, both in this game and other in the series. I did, however, very much like the idea of pivotal events, allowing players to both “bury” an unwanted event card and launch a major, possibly game-changing, initiative.

We played the medium-length, 1968-72 scenario. The first coup card came early before many operations had been undertaken, allowing the ARVN to set aside quite a large war-chest of resources and pacify much of the country.

The NVA built up large forces in Cambodia in preparation for a cross-border incursion, but ARVN forces slipped across the border to identify their locations for a series of devastating US air strikes. Given our habit of always playing games to a thematically-appropriate soundtrack, such raids were accompanied by either Steppenwolf’s Magic Carpet Ride (1968) or, of course, Wagner’s Ride of the Valkyries.

Meanwhile the Viet Cong struggled to expand their underground guerrilla network. They had some success in subverting government troops and police and weakening the local patronage system, although they heavily suffered from periodic ARVN sweeps and raids. ARVN and US pacification made the regime surprisingly popular in large parts of the country. Despite differing victory conditions (and the fact that only one player can ultimately win), NVA-VC and US-ARVN cooperation was very good. This was especially true of the latter, with ARVN sweeps often setting the stage for US air strikes, and some US capabilities enhancing ARVN forces too.

Later in the game the NVA again built up large forces in Cambodia, taking advantage of a US Bombing Pause (event card). When the US then followed a failed coup attempt (coup card) with a substantial draw-down of American forces, the NVA unleashed its Easter Offensive (pivotal event). North Vietnamese troops poured across the border from Cambodia, advancing upon and ultimately capturing Saigon. The Viet Cong followed up with the Tet Offensive (pivotal event). This was rather less successful at inflicting serious damage, although it did augment VC guerrilla strength.

Stretched on the ground and having taken significant casualties, the US unleashed another series of air raids against the NVA, devastating their forces in many areas. ARVN troops and rangers poured into Saigon, attempting to regain control of the capital amid bitter street fighting.

At this point, the game came to an end. Despite the heavy fighting still underway in Saigon, the US managed to secure a narrow victory, largely due it its earlier withdrawal of forces and the significant pro-regime support that still remained in much of the country. The NVA and ARVN were close behind in their points total, however. 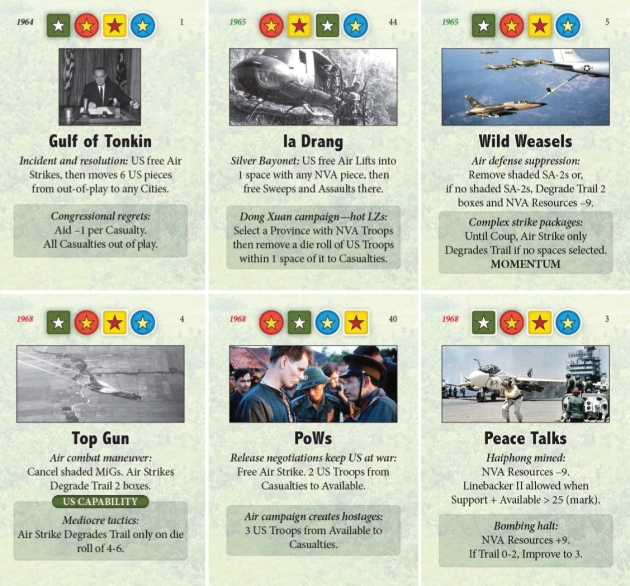 This game has a lot to commend it. I very much liked the way in which geography made itself felt in the game, something I felt rather less in Andean Abyss and A Distant Plain. In our game the Mekong Delta was very much its own sub-theatre, compared to the central highlands. The threat of NVA covert and overt intervention from along the length of the Ho Chi Minh Trail also has enormous strategic effect on game play.

On the other hand, our game suffered from significantly more “analysis paralysis” than any of our previous experiences with the GMT COIN series. There is no single obvious reason for this—the rules, operations, and events are only a tiny bit more complex, the types of forces available are somewhat more diverse, and the map has only slightly more playable areas. Three of our players had played several games in the COIN series before too.

Nevertheless, things slowed down considerably, to the point that we introduced an informal Stairway to Heaven rule whereby players were asked to finish their turn before the iconic 1971 Led Zepplin song was finished playing.

Perhaps we were tired, or too full of pizza. After all, war is hell.

At the time of writing Fire in the Lake is currently the highest rated of the four games in the COIN series on Board Game Geek, ranked an impressive 74th best wargame of all time. Among our group we all still preferred A Distant Plain, with two ranking Fire in the Lake in the middle of the series and the third ranking it his least favourite of the four. (In fairness it should probably be noted that I was the only person old enough to remember the Vietnam War, whereas the majority of the group work on contemporary conflict issues.)

Although our game ran more slowly than I would have hoped, I am certainly looking forward to a rematch!

3 responses to “Review: Fire in the Lake”