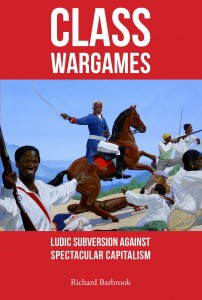 Richard Barbrook is a Senior Lecturer in Politics at the University of Westminster.  For many years, his group ‘Class Wargames’ has been playing and developing games including ‘The Game of War’ designed by the French Situationist Guy Debord. Richard (in his characteristic hat) has been a lively presence at our Connections UK conferences, and in 2011 he started a BA module involving wargame design, similar to my own long-running MA module.

The book details and builds upon the Class Wargames experience, and explores the background of Situationist thinking and radical perspectives on military strategy since Napoleonic times. Where most previous commentators on Debord’s radical writings have ignored his wargame as a bizarre aberration (as tends to happen to scholars like me to this day!), Richard Barbrook argues for the centrality of the game to Debord’s vision, and he suggests on p.334 that ‘If the modern Left wanted to challenge the dominant order, its activists would have to know how to beat the bourgeoisie at their own game’.

The book is eclectic, erudite and infectiously enthusiastic, ranging as it does from avant garde art to strategic theory.  I do not know what Richard’s radical readers will make of the scenario diagrams for battles including Marengo and Austerlitz, but the book is a refreshing counter to the widespread suspicion that wargamers are right wing militarists oblivious to the horrors of war.  Do have a look to learn more about this intriguingly left field approach.  You can find more info online at: http://www.classwargames.net/