PAXsims is pleased to present the third of five blog posts by David Romano (Missouri State University) on teaching International Relations through popular games, culture and simulations. You’ll find the introduction to the series here.

Computer strategy games have their own specific pedagogic advantages and disadvantages, of course. A serious disadvantage comes with the fact that not every student has a penchant for the complex rules, computer interfaces and strategies such games include. Students who grew up playing Sid Meier’s Civilization series, Panzer General, Master of Orion or even newer games such as Warcraft 2-3 and Starcraft can thrive with a computer game-based assignment. Others, unfortunately, will become frustrated and waste an inordinate amount of time just learning the basic game mechanics, and may not enjoy the “simulation” even once they become more comfortable with it. What’s more, this kind of assignment requires that the professor also have experience with the computer game in question, and just like students, not every political science professor is a computer strategy game geek (as hard as this may be to believe for some of us). That much said, the “4X computer strategy game” assignment can serve as an invaluable optional or extra-credit assignment to engage some students. The two computer games suggested here share much in common and will therefore be described together.

Civilization casts the player as one of 18 different civilizations, such as “Greek,” “Indian,” “Russian,” “Mayan” and “American,” and the game starts in 4000 B.C. (I generally discuss my reservations about this with students, as the civilizations in question each have their own particular traits, advantages and, when played by the computer, typical behavior – all of which generally betrays cultural stereotypes as well as anachronism problems when these are all placed in the same system at the same time.) In Stardrive, the player takes on the role of one of eight different sentient “races” (“species” in actuality) just as all eight species have reached the threshold of inter-galactic space travel. Both of these games follow what is described as a “4X” logic, a term coined in a review of the what was probably the best game of the genre – Master of Orion (Microprose 1993). The last time I used Master of Orion with students was in 2007. Unfortunately, most students today will have great difficulty running such an old game on their more modern computer systems.

The 4X genre refers to the imperative of the games – eXplore, eXpand, eXploit, and eXterminate. In 4X games players start out with a single settlement (or planet in the case of Stardrive) from which they are in a race with the computer controlled players to explore their system, expand to other well placed and rich settlements/colonies, exploit these expansion points to build their resources and power, and exterminate rival players that threaten them or get in the way of further expansion. A distinct slant towards the realist and neo-realist paradigms and associated theories (including unitary rational actors in the system) thus exists in the games, with ample room for reflection on these issues in similar terms to the RISK assignment discussed earlier. Unlike RISK, however, these games require extensive micro-management of one’s empire, including decisions about which technology to research, how many factories and farms to build, how much to invest in espionage, what defenses to spend money on, which other players to sign trade agreements or research swaps with, and so forth. Those who prove to be poor governors of their “states” and economies will find that better governors of other states (all computer controlled) outperform them and eventually win the game instead of them.

What makes the two games discussed here more suitable for IR pedagogy than most others, however, is the role of diplomacy and the fact that victory conditions for the games are not limited to conquering the entire system (as in games such as RISK and Diplomacy). In the various Civilization games (there are several – the one I have experience using with my students is Civilization IV), players can win the game not only by conquest and physical dominance but also by attaining cultural pre-eminence, being the first to successfully research space travel or being voted “leader of the world” in the United Nations. 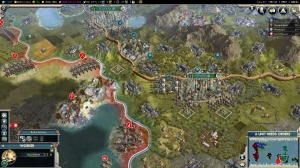 In Stardrive, players can win via conquest but also by forming a “galactic federation” in which they are the leader. The “elected system leader” victory conditions and the “cultural dominance” in Civilization allow for a focus on the games’ concept of soft power, which is rare for computer games. To win in this manner, players must get the computer players to like them a lot – which is generally accomplished through sustained and peaceful interaction in the form of trade and joint research treaties, non-aggression pacts, alliances and trading of technology. This allows for a discussion of multiple-sum gains and the Liberal paradigmatic view of the world. A transformation of the system via the election of one leader for everyone also leads students to think about literature on globalism and world government if they have already been exposed to such.

The most useful advantage of both games, however, comes with their ability to get students to think more deeply about systems and the units that play the most important role in a system. It is one thing to tell our students that Realist paradigms focus on the international anarchical system and the role of states as the most important actors within the system, while Marxism looks at the international capitalist system and the role of classes and Liberalism looks at individuals and a plethora of other actors (the most important of which are states). Nation-states and today’s world is all they really know – while we can discuss religious empires of the past, city-states and other systems from antiquity, the idea of alternate worlds generally has trouble sinking in.

With Stardrive or similar science fiction, however, the system changes from our world to the universe, and species typically replace states as the main actors – usually with attendant assumptions about the species acting as a single unitary and rational actor. Although some of the species in Stardrive and other sci fi venues look extremely alien, they generally follow the same power and security imperatives that Morgenthau (1948), Waltz (1959) and many others in the IR literature describe. Whether one is dealing with a big space bear or ambulatory alien plant in Stardrive, just like anyone else they will demand that you remove your spies from their territory or offer a non-aggression pact for mutual security. This naturally leads to a reassessment of Classical Realism’s “Human Nature” as perhaps not limited to humans, and consideration of the Neo-Realist argument about the structure of the system being the real determinant of behavior.

In the Civilization games, the system remains our world but in the beginning is limited to whatever continent the player finds themselves on. Only when the requisite sea-faring technology is successfully developed by enough players does the system truly globalize into a single world system. The units in this system do not quite look like nation-states, however, even if “American” and “French” are dubbed civilizations by the game’s creator. Rather, with their single religions and other generalized cultural traits, they look more like Samuel Huntington’s clashing civilizations (1996) – which offers students a chance to reflect on such.

In the interests of brevity, I will provide only my assignment guidelines for Stardrive here (the Civilization directives are quite similar but tailored to that game instead):

Like Loading...
simulation and gaming ideas
← Teaching international relations through popular games, culture and simulations (Part 2) The curse of D&D →