Wednesday’s presentations at the Connections 2014 interdisciplinary wargaming conference started off with a keynote address by author and game designer Larry Bond. He recounted an anecdote about playing Persian Incursion with a group of Marine Corps intelligence students. At first the participants had difficulty understanding fairly typical wargame rules and combat results tables—although they soon caught on. The episode highlighted that waging a war is not the same as wargaming. Indeed, many war-fighters have little or no interest in wargaming.

Larry argued that wargames are very useful for training, and while they can’t validate or prove anything, it can be used to identify major themes and issues. The learning curve may be steep for non-gamers. However relatively simple and focused games can be very useful. Role-playing games are quite extensively used, and can immerse players in context. Miniature games have fallen almost completely out of favour in the military, although they do have utility in providing a visual, spatial representation. Card games are not used either, although do have considerable potential. Digital games are favoured in the military because they are usually are easier to use. However they are expensive to develop and require extensive support.

Games need to be made accessible with a relatively simple learning curve. Appropriate time needs to be devoted to introducing as well as playing the game.

This was followed by a panel discussion on cultures within wargaming. Specifically it examined use of wargames as military decision support in the US Marine Corps (Bill Simpson), the experience of the US Naval War College with wargaming and reflective practice (Shawn Burns), observations on gaming cultures from peacebuilding games (myself and Gary Milante) and the moot court process in legal training and trial preparation (Jeff Robins).

The argument we made in our own paper was that while cultures tend to have somewhat different attitudes to interaction, power, cooperation, and other aspects of individual and collective behaviour. However cultures should not be thought of in solely national/ethnic/religious terms. Subcultures also vary by profession/occupation, generation, even gender—as demonstrated by research in experimental economics and psychology. 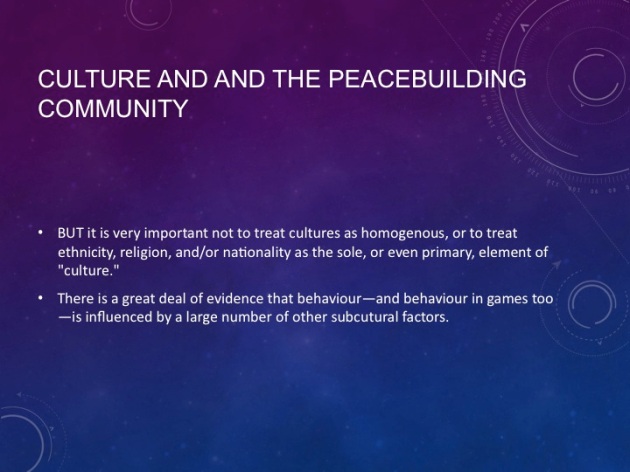 The lunchtime talk was by Adam Frost of the Joint Chiefs of Staff (J8), discussing the work they did on gaming broad, strategic political-military issues.

The next major panel was on how social science can increase the value of wargaming, Anja van Hurst (TNO) discussed games used in the Netherlands examined the challenges of complex decision-making in tactical situations, disaster management, and stabilization missions. She highlighted their conclusions that is was sometimes necessary to “train less” (by deleting details, such as maps, that might distract participants for the core issues), “train more” (through low-cost fidelity that enables more frequent play), and “train different” (through an emphasis on discovery learning and reflection rather than teach/try/critique).

Yuna Wong (Operation Analysis Division, US Marine Corps) and Sara Cobb (GMU) examined narrative analysis in wargaming. Yuna started off by noting there were three ways to establish your credibility in wargaming presentations—to quote Peter Perla, to show a picture of 19th centurury Prussian kriegsspiel, or to mention your favourite wargames played in youth. She and Sara opted for a Perla quote, as at least half of the other participants had done in their own presentations.

Sara then discussed how and why narratives are important in conflict. A narrative analysis technique, specifically actant analysis, was applied to a game that looked at potential conflict in an unstable Arab Spring-like situation. This highlighted to which actors’ internal narratives and self-understanding could be quite different from the narratives other parties developed about the same situation.

Jim Wallman (Past Perspectives) talked about designing games that are intended to promote (cross-)cultural understanding. A game can help to expose the spoken, implicit, unspoken, and hidden assumptions of groups. His cultural wargames tend to be non-kinetic, mixed cooperative/competitive, involve distinct roles and perspectives. He described his Barwick Green game, in which outside Bangladeshi peacekeepers are deployed in a small village in the context of an unstable Britain. Tim Moench (US Air Force Global Strike Command) discussed “Schelling Revisited.” There was a great deal of substance in his presentation (and in Schelling’s views upon which it built), making it difficult to summarize.

After a break, we were all given an opportunity to participate in a hands-on workshop, either on narrative analysis (with Sara and Yuna) or to play Barwick Green with Jim. Having grown up in a small British country village, I naturally gravitated to the latter. I loved the way in which the game captured the difficulty of peacekeepers coming into an alien, complex, closely-knit local society and trying to get a handle on what is going on. Jim has let me have a copy, and I’ll definitely be giving it a try in POLI 450 next year. 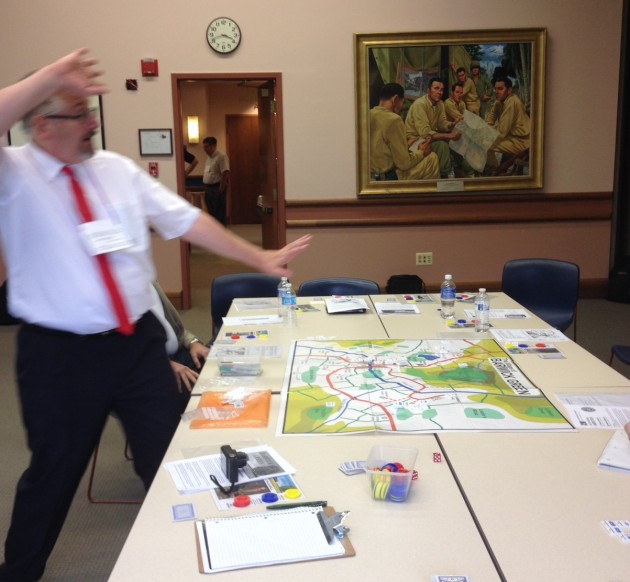 Jim Wallman leaps back in blurry surprise as insurgent weapons are smuggled under the very noses of UN peacekeepers in the small rural village of Barwick Green.

The final session of the day split participants among one of three working groups: the first on developing an inventory of wargame cultures, the second on using wargames to promote international cooperation, and the third promoting advancement by interchange between wargaming cultures. The reports of these groups will be presented tomorrow.

Finally, as a special treat, Tom Mouat demonstrated how relying on the sat nav in your rented car while en route to a nearby restaurant will take you through restricted areas, unpaved backwoods roads, and finally a locked barbed wire security gate.