In addition, read the commentary on all of this by Paul Vebber at Wargaming Connection.

Some recent items on conflict simulations, serious games, and the politics of not-so-serious games that may be of interest to PAXsims readers.

Come across an interesting story? Send it to us!

On May 9, many of the folks associated with Connections UK participated in an Army Wargaming Symposium held at the Defence Academy of the UK . According to the organizers, “[i]t was a great success, with over 100 participants from the Army, DSTL and academia…. The intention is to follow this up with an investigation as to how to spread best practice for this intellectual fitness regime to the wider military community.”

Some of the presentations are available on the Connections UK website:

On April 25, American University (Washington DC) held a “Gaming with a Purpose” workshop, featuring Volko Ruhnke as the guest designer. Volko describes the evening at ConSimWorld:

Last night, two American University professors hosted a game night in the AU Library in Washington DC that gathered some 40 students around 4 sessions of A Distant Plain, 1 of Cuba Libre, and 2 of LABYRINTH—The War on Terror. I attended as guest game designer. 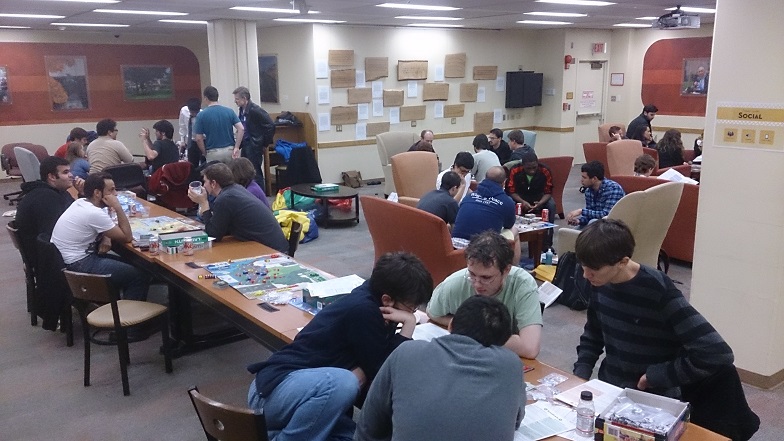 School of International Service professors Dylan Craig and Leah Gates organized the event under AU’s new “Gaming with a Purpose” initiative. As step 1 of the initiative, the AU Library has acquired a sizable collection of boardgames, including the entire COIN Series, many funded via a donors event. Step 2 is to invite students into the Library for game nights such as this one, with the added lure of pizza. Step 3 once students are more familiar with the artform will be to incorporate more boardgames such as these into curriculum that teaches strategy in global affairs, such as in 1-credit weekend courses focused on specific conflicts, Afghanistan among them.

In addition to the Library, campus groups such as the boardgame-focused AU Gamers, the Global Politics Student Association, and the War Studies Club participated. The professors had organized a cadre of facilitators to teach the games at each table.

AU’s initiative is very exciting to me not only because of its effort to leverage specifically the COIN Series for learning, but also because of my strong sense that boardgames in general remain vastly under-used as a teaching method.

I have no idea yet what the student attendees thought of these particular games, but regardless of that, they sure seemed engaged!

Recently, Denmark created a scale model of the entire country in Minecraft.

Not surprisingly, it soon came under attack. According to the BBC:

A virtual replica of Denmark created to help educate children has been disrupted by “cyber vandals”.

Small portions of it were blown up, despite a ban by its creators, the Danish Geodata Agency (DGA), on the use of “dynamite”.

Large US flags were erected at the starting area, as well as red, white and blue “America” signs.

The state-owned agency believes the “vandalism” was to attract attention, and said the damage had been repaired.

Images showing the changes first appeared on the fan site minecraftforum.net posted by a user who wrote: “I americanlized [sic] the place a bit.”

Chris Hammeken, chief press officer at the Danish Geodata Agency, told the BBC: “Only a minor area was destroyed.

“The flags actually appeared right where the players start, so I think the people who put them there wanted to gain as much attention as possible.”

“Minecraft is about building and rebuilding,” said Mr Hammeken, who described the incident as part of Minecraft’s “nature of play.”

The Danish project has a serious purpose:

The DGA created the replica of Denmark in order to arouse interest in spatial data, with a particular emphasis on educating children.

Its website explains: “There are real addresses in the game, so it’s possible to have a discussion of place names and their meanings.”

The agency has also suggested using the replica as a way of taking students on virtual field trips.

“We’ve discovered children are more motivated to learn when they see something they’re familiar with,” explained Mr Hammeken, who said Minecraft had been used as an educational tool in Denmark for a long time.

Kim Correa discusses the problem of MMORPG in-game sexual assault (“Being a Lady and Playing DayZ“) at TLDR.

Nintendo life-simulation game Tomodachi Life won’t allow players to play gay characters, which generated something of a backlash. Nintendo initially said it “never intended to make any form of social commentary,” although its refusal to see this as a problem was social commentary in and of itself.

Subsequently, however, it has revised its position and apologized to players, promising to be “more inclusive” in the future:

We apologize for disappointing many people by failing to include same-sex relationships in Tomodachi Life. Unfortunately, it is not possible for us to change this game’s design, and such a significant development change can’t be accomplished with a post-ship patch. At Nintendo, dedication has always meant going beyond the games to promote a sense of community, and to share a spirit of fun and joy. We are committed to advancing our longtime company values of fun and entertainment for everyone. We pledge that if we create a next installment in the Tomodachi series, we will strive to design a game-play experience from the ground up that is more inclusive, and better represents all players.

In the meantime, The Sims 4 has been rated “adult only” in Russia because it permits same-sex relationships in the game. According to The Escapist:

Russia has slapped an 18+ age rating on The Sims 4 because its portrayal of same-sex relationships contravenes a law protecting children from “information harmful to their health and development.”

The Sims Russia Twitter account announced earlier this week that the upcoming Sims 4 has been rating “18+ (Prohibited for children).” That might seem like an odd rating for a game widely viewed as a relatively kid-friendly offering – previous Sims titles have all been rated T (Teen) by the ESRB, and The Sims 3, released in 2009, was rated just 12+ in Russia – but things in the Motherland have changed in more recent years.

A follow-up tweet clarified (via Google Translate) that the restrictive age rating “was assigned in according with the law number 436-FZ, ‘On the protection of children from information harmful to their health and development.'” A quick trip to Wikipedia reveals that the law was originally passed in late 2010 to prohibit the distribution to children of material that “may elicit fear, horror or panic,” or that depicts “violence, unlawful activities, substance abuse or self-harm,” but was updated in 2013 to include “propaganda of non-traditional sexual relationships.”