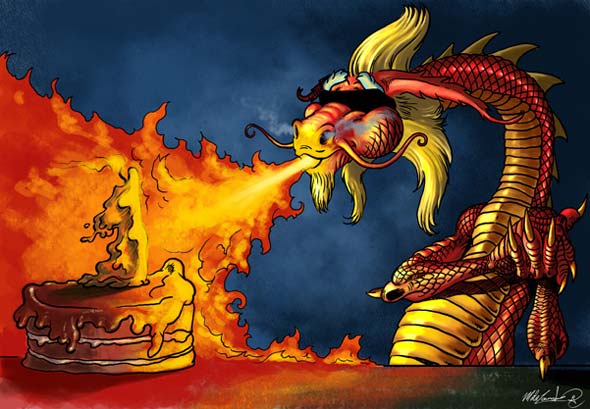 According to Jon Peterson—author of the seminal history of Dungeons & Dragons, Playing at the World—the best guess as to the birthdate of the role-playing game is tomorrow:

Many sources, including Playing at the World, assign to Dungeons & Dragons an initial release in January 1974. Our best evidence comes from contemporary notices like the one above, a letter written by Gary Gygax late in 1973 that foretells the imminent release of the game. Now, with the fortieth anniversary nearly upon us, a burning question arises: when exactly should we celebrate? While there is no shortage of anecdotal accounts describing when, and to whom, the first copy of the game was sold, there is little concrete evidence to indicate any particular birthday….

Jon being Jon, he of course then goes on to provide a detailed chronology of the genesis and publication of the game, concluding:

For all the reasons listed above, it’s probably impossible to narrow in on one date and say with any certainty that this is when the game was released. But if we need to celebrate somewhere in the neighborhood of late January, then the last Sunday of the month (this year, the 26th) seems like the best candidate. As the El Conquistador advertisement above notes, Sunday was the day when Gary invited the world to drop by his house, at 1:30 PM, to have a first experience of Dungeons & Dragons. Since it’s a weekend, many of us can clear our schedules to revisit some classic tabletop. So this coming January 26th, 2014, do take the time to celebrate the birth of Dungeons & Dragons and role-playing games.

I was a serious wargamer before I was a D&D player, refighting World War II before I ever first fought Orcs or a relieved a nobleman of a heavy coin purse. However, I can also claim to have been a fairly early convert—we in the “Lymington & District Wargames Club” started playing around 1977 or so, using the original three booklet “white box” edition of the game. I have played every edition since (and a great many other RPGs as well).

While my overriding reason for playing D&D has always been the sheer fun of it, the game has also had implications for my professional career. It probably contributed to my self-confidence in groups, and a certain degree of organizational skill. It absolutely contributed to my professional work on serious games and simulations in far too many ways for me to count. My Brynania conflict simulation is, in many ways, a giant, week-long 120-player game of D&D set in the context of a country emerging from civil wars—but with UN agencies, NGOs, insurgents, and governments instead of wizards, fighters, and rogues. I have also borrowed from D&D game techniques to help organize a workshop for Libyan rebels, facilitate my civilian role-play contribution to a special forces irregular warfare exercise,  run a planning exercise for a UN humanitarian agency, and do a great many other things that lacked both dungeons and dragons. Playing D&D, and even more so, organizing and running a campaign, tells you a great deal about the importance of narrative, engagement, immersion, and group dynamics in a successful serious game or simulation. One of my current gaming group, who designs money-laundering and corruption simulations for the World Bank and anti-corruption agencies, similarly got his start in professional simulation design as a player and dungeon-master.

For more on the 40th anniversary of the game, see also articles in The Guardian and Salon. And, in the meantime, a very happy birthday to D&D  from a trio of famed halfling rogues—Arnold Schaeffer, Arnold Wurzel, and Arnold Brandyken—as well as  Finius T. Stormfroth, the pirate warlord!

h/t Excellent image above by AvatarArt, via Dungeon Mastering blog.