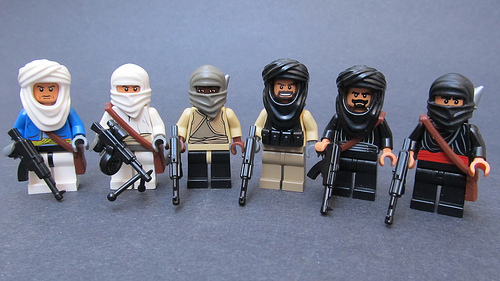 Some recent simulation and gaming items that may be of interest to our readers:

The May/June 2013 issue of the US Department of Defense Modeling and Simulation Coordination Office (M&SCO) M&S Newsletter is now out. You’ll find it here.

Brian Train (insurgency simulation designer par excellence) has a thoughtful discussion with Tom Grant (of the I’ve Been Diced game blog, whose PhD was on insurgency before he turned to other things) on the challenges of designing counter-insurgency wargames via Brian’s own Ludic Futurism blog.

Brian will be among those presenting at the Connections UK wargaming conference at King’s College London next month.

According to the Washington Times, US Republican politician Newt Gingrich has growing doubts about the US ability to export democracy:

Mr. Gingrich supported the U.S. invasions of Iraq and Afghanistan, but he said he has increasingly doubted the strategy of attempting to export democracy by force to countries where the religion and culture are not hospitable to Western values.

“It may be that our capacity to export democracy is a lot more limited than we thought,” he said.

Mr. Gingrich at times has expressed doubts about the U.S. capacity for nation-building, but he said he now has formed his own conclusions about their failures in light of the experiences of the past decade.

“My worry about all this is not new,” Mr. Gingrich said. “But my willingness to reach a conclusion is new.”

Mr. Gingrich said it is time for Republicans to heed some of the anti-interventionist ideas offered by the libertarian-minded Sen. Rand Paul, Kentucky Republican, and Sen. Ted Cruz, a Texas Republican, tea party favorite and foreign policy skeptic.

“I think it would be healthy to go back and war-game what alternative strategies would have been better...” [emphasis added]

It is nice that Gingrich has such confidence in the ability of professional wargaming to deliver such answers, but here’s the thing: they can’t. It might be possible to use policy games to explore some of the things that might go wrong in democracy-promotion—although you can probably do that even more effectively in a simple seminar-style BOGSAT discussion. We certainly can’t wargame what would definitively “work,” however, because the social science just isn’t there to support unambiguous judgments. On the contrary, both scholars and the intelligence community are still searching for greater clarity as to how complex political processes like regime change and political transition unfold.

Any wargame requires an underlying model of cause and effect. If our knowledge of cause and effect is fuzzy—as it so often is with social and political processes—one needs to treat with considerable caution any predictions derived therefrom.  (h/t Red Team Journal) 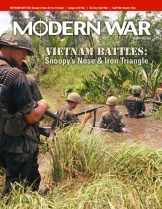 The September/October 2013 issue of Modern War magazine is out. There are articles on the Vietnam War, the Second Congo War, Robert Thompson’s work on counterinsurgency, and the US Army National Training Center, as well as shorter pieces on game design, weapons systems, and other topics.

The  wargames included in this issues are designed by Eric Harvey, and examine two 1967 Vietnam War operations: “Snoopy’s Nose” (riverine action in the Mekong Delta) and “The Iron Triangle” (an offensive against Viet Cong bases and tunnels northwest of Saigon).

In a recent discussion at the Simulating War Yahoo group, Phil Sabin commented on the extent to which most wargames reduce the bureaucratic processes of war-fighting to unified entities and singular decision-making:

It is absolutely true that one of the biggest abstractions in wargames (and game theory) is the representation of complex bureaucracies as single decision making ‘actors’. Players have god-like control over forces represented as inanimate counters or computer pixels, whereas in reality, even the most absolute ruler has to focus on the human skills of motivating his or her subordinates and employing subtle psychological devices and a judicious balance of carrots and sticks to achieve anything at all. Jim Dunnigan’s ‘NATO Division Commander’ game scratched the surface of this internal management challenge, but it would really take a bureaucratic role playing game to give anything like the flavour of the human relations challenges involved.

He suggested that this might be a good thing, since wargaming allowed military officers to push everyday bureaucratic process aside for a moment and focus on the command of combat operations against a calculating opponent:

My own take on the potential contribution of wargames for military officers is rather different. In reality, military forces are so preoccupied with the day to day bureaucratic challenges of management, leadership and politics within their own services and governmental systems that real enemies tend to be ‘out of sight, out of mind’. This tends to produce results such as ‘the fallacy of the passive opponent’, in which so much energy is spent on the massive challenge of developing and implementing one’s own strategy that one forgets that the enemy will have a counter-strategy which could change the contest completely. The beauty of wargames is that, by abstracting out the internal challenges with which military officers are already so familiar from everyday experience, they allow those officers to focus on and to gain vicarious experience with the equally important but much more sporadic challenges of prevailing over active and reactive adversaries.

Specifically, most of my professional gaming involves either teaching students about the inter-agency complexities and coordination challenges of peace operations, or working on policy issues with folks in the diplomatic, development, and  humanitarian communities. These games typically take the form of role play exercises, where participant X is representing (for example) USAID or the State Department and participant Y is representing UNHCR or a local government. Most participants are therefore “one-person bureaucracies.” As such, they are generally not fully constrained by the legal rules, institutional procedures, or bureaucratic inertia of their real-world counterparts. Moreover, because of the rather “free kriegsspiel” character of a roleplaying simulation (whereby written rules are kept to a minimum and much depends on adjudication by the white cell/game control/game master), the potential freedom of action of players is even larger compared to a wargame wherein unit capabilities are quantified and interactions are rules-based.

Because of this, a fairly common observation in student debriefs from my POLI 450 “Brynania” peacebuilding simulation is that the simulation highlighted how important personal initiative and face-to-face meetings are in solving problems. That’s partly true, of course—but it is also the case that, in a real civil war or humanitarian emergency, foreign ministers and heads of UN agencies don’t pop down to a café near campus to resolve some problem, or that the problem is quite so easily fixed. Needless to say, my usual debrief for that course addresses the extent to which the simulation format may exaggerate some elements (heroic problem-solving individuals) and undervalue others (large complex institutions with established procedures).

Can this be addressed in the game itself? I do have a few elements I introduce to try to generate some institutional politics (resource constraints, budget envelopes, multiple participants playing different parts of the same organization). However the problem here is that one doesn’t want to introduce so much bureaucratic process that the simulation becomes one of endless committee meetings and filling out form GX1233-45B in triplicate. If participants seem to be headed in an institutionally unrealistic direction, they may be presented with a request to write a memo explaining their proposed course of action in light of likely constraints. Helpful “junior staff” (i.e., me) may send them an email explaining why, in practice, what they want to do wouldn’t happen or wouldn’t work. In those cases, where students ought to have known better, I might just let it all go terribly wrong. In the most recent Brynania simulation, for example, one simulated Defence Minister decided to launch a coup in his authoritarian country by simply ordering troops to overthrow the President, without any clear reason for doing so, and without addressing the safeguards that likely existed in the system (for example, senior officers chosen for political loyalty). Needless to say, the Defence Minister was arrested instead, and was subsequently “shot while trying to escape.” (In such cases, I generally allow students to reincarnate into different roles.)

One notable success I  had in trying to address these sorts of issues involved a simulation on Palestinian refugee negotiations organized for Chatham House a few years ago. Those of us who had been working on the issue had been worried for some time of a possible disconnect between the negotiations (dominated by leaders and lawyers) and the practical and institutional challenges of actually implementing an agreement. The simulation design was intended, in part, to recreate this: Israeli and Palestinian participants (many of them former senior officials or negotiators) were largely involved in try to producing an agreed text. Pretty much everyone else (from aid agencies, international organizations, and NGOs) was charged with trying to make it work. As we expected, those in the “negotiation bubble” tended to lose sight of some of the procedural and institutional details as they focussed on high politics. Those with experience in implementation sent back the signal that what they were contemplating in the agreement would be very difficult to make work in the way they imagined. The gap between what leaders wanted to do and what institutions could do was instructive, and indeed spurred the UK Foreign Office, EU, Canada, and others to devote greater attention to the practical challenges of implementation and process.

Perhaps the biggest challenge is trying to show, in a game context and within the game dynamics, that bureaucratic politics— while often bemoaned—also has its own logic and value. Not everyone at the table agrees, or shares the same perspective. Precipitous action isn’t always bold, it is sometimes stupid. Getting parties to act in concert requires that they feel they are part of the solution rather than taken for granted. Obtaining scarce resources ought to require convincing senior officials that you aren’t going to squander them, and probably should involve further safeguards to make sure others don’t squander them too.

Just as a brilliant maneuver on the battlefield to achieve a military objective is usually intrinsically and extrinsically rewarded in most wargames, so too the negotiation and institutional choreography required to make complex organizations change direction or undertake initiatives ought to be framed as a “victory” of sorts in games that address policy, peacebuilding, and interagency cooperation.