June McCabe is an MA student in political science at McGill University, whose research interests including peace operations, humanitarian assistance, and simulations. She participated in the Canadian Humanitarian and Disaster Response Training Program in May, and offers these reflections on the experience.

Recently, there has been a growing trend in humanitarian response to use simulation exercises to train personnel for work in the field and improve organizational capacity by familiarizing humanitarian aid workers with protocols and standards for effective provision of aid. Simulations can be useful not only in research and knowledge creation but also as a method to teach in a practical way that is difficult to get from classroom experience alone. Moreover, simulation can help to provide a strong foundation for future aid workers pre-deployment so that when arriving on scene in a real crisis they have the personal and professional skills to cope. The Emergency Capacity Building Project has identified three distinct types of simulations used in humanitarian response: skill drills, where specific skills and knowledge are utilized and tested; functional simulation, where participants act in a role they could fulfill in a real crisis; and table top simulations, which involve discussion and problem solving of an aspect of a real or hypothetical crisis (Barnhardt, Bulten, Hockaday, Sitko, Staples 6). 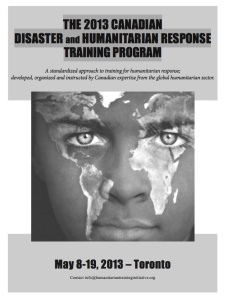 By the end of the 10 day course, my knowledge of humanitarian aid had been greatly expanded. I now feel ready to consider aid work with a grasp on how it must be to work in the field. The sim showed some of us that we never want to do humanitarian aid work, while others of us found it invigorating and are preparing for deployments to the DRC. The simulation was the part of the course that brought what we had learned during the long classroom tutorials into focus. It challenged both our abilities and our ideas about being an aid worker. In the end, the SimEx was one of the most multifaceted and complex learning experiences I have ever had.

During the first week of the course, we learned about the cluster system, the Sphere core standards, as well as ethics and the history of humanitarian aid. Lectures were supplemented by table top exercises culminating in a mock aid project pitch where we created a project with short and long-term goals, a timeline, materials projections and budget estimates for an IDP camp in Côte d’Ivoire. The last three days of the course, the SimEx, took place on a campground at Sparrow Lake, Ontario made into the fictional country of Simlandia. The SimEx placed students in the midst of a complex emergency scenario where aid workers struggled to reach populations affected by a tsunami while dealing with tight military controls as well as rebel activity in the area. The simulation scenario itself touched on some of the most challenging aspects of a complex emergency including child soldiers, government manipulation of aid flows, celebrity appearance and of course, high security risks to NGO personnel. 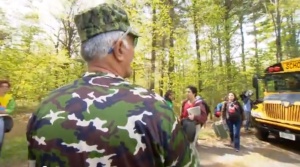 he SimEx was built on both functional simulation and skill drill components. Upon arrival at the camp, students were broken into NGO teams (i.e. Oxfam, World Vision). Within the team, each student was assigned a cluster specific role (i.e. WaSH, Shelter, Security). During the day, NGO teams would rotate through different “stations” performing skill drills relating to a specific cluster. Each station challenged the students to employ knowledge of Sphere standards and skills learned during the first week of the course. Information collected at these stations also contributed to an overall picture of the developing humanitarian emergency. In contrast, the functional aspect of the sim focused almost entirely on the emotional and physical demands of being a humanitarian aid worker during the first day, week and then month of an emergency (time conversion on Days 1, 2 and 3). How to work as a team and communicate while being hot, hungry and tired was one of the most fundamental lessons the sim was designed to teach us.

Overall both the functional and skill drill portions of the simulation were educational and illuminating. The skill drills allowed students to utilize the training materials and information that we had learned during the previous week and carrying this out successfully was very motivating. The functional part of the simulation really allowed us to experience the stress and fatigue that can occur during a deployment immediately following a disaster. The most valuable and rewarding part of the functional portion of the simulation was learning how to work as a team and to rely on teammates for emotional and physical support. The course as a whole also provided a great networking opportunity for students trying to enter the humanitarian aid sector. The SimEx facilitators were very high caliber founts of knowledge, one of the program’s strongest points. Being able to work with such experienced and knowledgeable people like Dr. Kirsten Johnson and Dr. Hilarie Cranmer was a great learning opportunity.

While the simulation was largely constructed and executed well, the combination of skill drills and functional simulation as well as the short time allocated for debriefing post-simulation were areas in need of some improvement. The following sections will elaborate on these challenges and provide suggestions for future iterations of the SimEx.

One of the primary reasons for including the SimEx in the humanitarian training program is to allow students to experience the stages of a humanitarian emergency scenario without the actual loss of life and accompanying emotional stress. However, the stress of trying to manage one’s team objectives, deal with the media, and function in the woods with little rest and food is still a difficult task in and of itself. These team objectives, coordination, report writing, lack of food and rest can all be considered part of the functional simulation component. The skill drill stations were interspersed with other big-picture events such as meetings with UN OCHA. Teams were often unprepared or unaware of what would happen at the next station because these big-picture functional events took so much time and focus. In the worst cases, the skill drills actually functioned in opposition to larger team objectives. For example, while trying to coordinate a food distribution in an IDP camp, we were brought as part of a skill drill to a meeting that ICRC had set up between my team and the local rebels, who happened to be child soldiers. We had not planned this meeting, nor did we understand the larger objective. In the end the meeting went poorly and we lost valuable time to plan the food distribution. In future years, the SimEx could be improved by tying the skill drills more closely to the larger scenario events and allowing teams more freedom to decide when, where and how they would attempt a skill drill. Although it is reasonable to have both functional simulation and skill drills in the same scenario they need to be integrated more smoothly for the students to truly benefit from them. A slightly less contrived station rotation would also help to maintain suspension of disbelief. To achieve this may require fewer skill drills or fewer events and assignments in the functional component. Students will continue to feel the stress of the scenario even with far fewer events to complete.

Another critical aspect to simulation is the debriefing portion. Due to time constraints, debriefing was quite short in the SimEx. The Emergency Capacity Building Emergency Simulations Administrators’ guide recommends a debrief period equal to the time of the exercise itself (Klenk 50). Three whole days of debrief may be unnecessary, but a much greater emphasis should have been placed on debriefing after skill drills as well as the different stages of the functional simulation. It could be constructive to utilize the “experimental learning cycle” which breaks activities into stages of concrete experience, reflection, generalization, application and then a return to experience (Klenk 57). It would help students in the future to practice a skill drill or a specific event or scenario, debrief and then attempt a similar event utilizing the same skill. Debriefing in the middle of a scenario can disrupt the realism, however it is better to do so than not debrief. Perhaps this presents another difficultly in trying to integrate skill drill and functional simulation methods into the same scenario.

The program certainly achieved its goals to improve disaster preparedness of humanitarian aid workers attending the course. Through coordination of organizations like HTI, the long-term goal of improved operational capacity of NGOs and inter-sector communication seems quite possible. Students from these programs are receiving a standardized education of the field and the Sphere project, creating a common language that can be used during a crisis. The SimEx is an incredibly valuable learning tool and opportunity for growth. The specific goals of the SimEx were also met; the vast majority of students came out of the experience with a greater understanding of a humanitarian aid operation and whether they would like to participate in one in the future. Finally, as the Canadian training program expands and matures, hopefully some of the first time difficulties we experienced can be reflected on and used to improve the SimEx in the coming years.