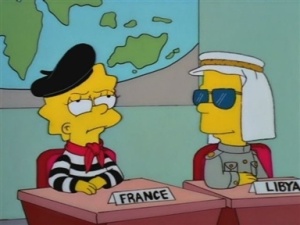 From time to time I’ve had several anecdotal discussions with both students and colleagues about the ways in which participation in classroom simulations might be affected by gender. In my annual classroom civil war simulation we once asked an array of pre- and post-simulation questions designed to measure self-reported learning outcomes, and found no significant gender-based differences. I’ve also collectively asked the class  whether they think gender shaped participant behaviour. Both men and women tend to split 50/50 on the issue, with around half saying there are significant gender-based differences in simulation styles and participation, and about half disagreeing. I really should study it more systematically in the future.

A new article in the Journal of Political Science Education 9, 3 (2013) by Richard Coughlin on “Gender and Negotiation in Model UN Role-Playing Simulations” does just that. His finding are as follows:

This article reports on the relationship between gender and participation at the 2010 Southwest Florida Model United Nations (SWFLMUN). Three major findings emerge from this research: (1) Even though more females participated in the SWFLMUN than males, males accounted for most of the speeches and played more decisive roles in the formulation of the committee resolutions; (2) male and female delegates employed similar negotiating styles; and (3) surveys administered to delegates suggest that males and females derived about the same amount of satisfaction from the conference but that males, paradoxically, were more likely to report barriers to participation than females. These results leave the impression that gender is a significant, but unremarked factor in shaping participation. These findings are discussed with respect to a normative conception of Model UN (MUN) as a mode of global citizenship. MUN is designed to overcome national ethnocentrism by affirming the existence of multiple perspectives on world issues and by establishing a deliberative process through which these different interests and perspectives can be negotiated. The results of this research, however, suggest that gender stereotypes may alter the kind of political socialization that is both expressed and reproduced through MUN. Substantive inequalities associated with these stereotypes may be infecting formally inclusive public spheres—such as MUN—with the effect of coding politics as a competitive, male domain.

2 responses to “Gender and simulation participation”