Virtual MORS: Bartels on “Can your game multi-task?”

The Military Operations Research Society (MORS) 81.1 Virtual Symposium started today, with online presentations on a broad range of topics. As I post this, Ellie Bartels (National Defence University) has just finished presenting an especially interesting paper, cowritten with NDU colleague Deirdre Hollingshed, on “Doing More With Less: Can Your Game Multi-task?” (click the link to download the full set of slides).

The conventional wisdom in the field has generally been that games should be designed with a single one of these purposes if they are to be most effective. 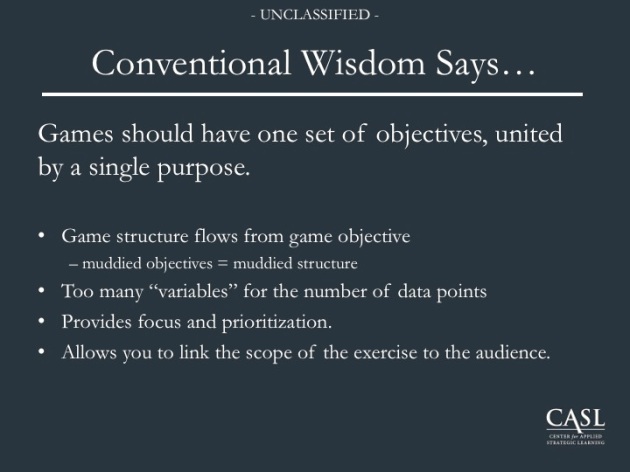 However, she argued that there may be  value in mixed games that simultaneously undertake different tasks, involving rather different groups of participants. She explored this by recounting the case of “Exercise Scattered Light,” a four-day, four move , dual purpose (education/policy) game that examined policy issues related to security and stabilization in Mali and the larger Sahel region. 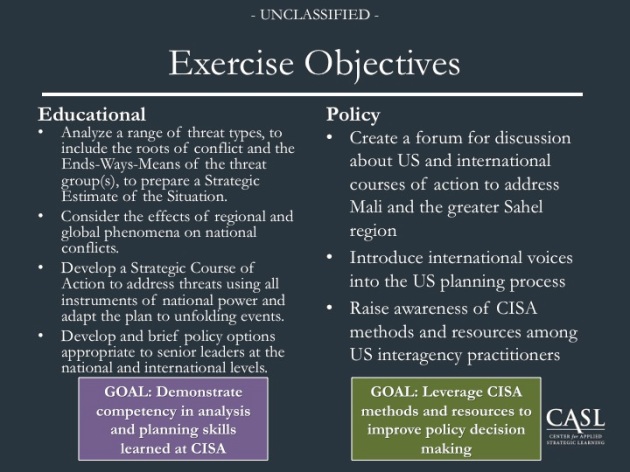 Overall, and despite some limited drawbacks, she suggested that the approach had proved quite productive and useful. She also noted that in an era where budgetary austerity limits game participation, enabling a broader range of potential participants might also have a practical value too.

I was struck by the parallels between her mixed game approach and the similar mixed approach that we used for the UNRWA humanitarian policy simulation at the University of Exeter earlier this year. In that case we had a mix of both graduate students and senior subject matter experts. I asked Ellie whether she had found the mixed approach had altered the interpersonal dynamics of the exercise in any way:

Q: I recently ran a game for senior leadership of a UN humanitarian organization that very much fitted in your mixed game model—in this case, a mix of graduate students and SMEs/policymakers organized in competing teams in a process that had both analytic and educational purposes. We found that the energy of the students really pushed the SMEs to work even harder (in part because they didn’t want to be “beaten” by the juniors). How did you find the psychological dynamics were altered by the mixed game (and participant) approach?

Ellie noted that this effect was likely limited in “Scattered Light” because of the format they had adopted:

A: I think there was a different dynamic here because they had different roles, The students were much more resource constrained (per reality) and in some ways the policy makers ignored student strategy until prompted. I think more exchange between the two groups would have helped but we were aiming for a cooperative rather than competitive dynamic in tone so that may also have impacted performance.

Overall, it was an excellent and well-delivered case study in professional gaming, and I’ll try to link to the recording when it becomes available. The DCO online meeting software also seemed to work well too—I certainly hope MORS continues to offer this option in future.