Washington’s birthday and those treacherous French

FOX News is, it would seem, a little miffed by the new downloadable content for the video game Assassin’s Creed III released by Ubisoft earlier this week. The Tyranny of King Washington posits an alternative universe in which, after the American revolution, George Washington becomes a power-hungry dictator.

What’s more—and here is the shocking part—Ubisoft is a French company.

A day after the United States honored George Washington, a French software company released a video game that depicts the first president as a tyrant who hangs people and must be assassinated.

You’ll find more bemused coverage of this at Kotaku, and a review of the actual DLC here at IGN.

(Pssst, don’t tell FOX that The Tyranny of King Washington was codeveloped here in Montréal. Unlike the French—who strongly supported the American Revolution with ships, guns, and thousands of troops—we tended to think of it as dangerously radical Protestant jihadism and/or treasonous rebellion against the British Crown.)

A useful article with which I completely disagree

Following a conversation over a few glasses of wine this last weekend about player types with Julie and my friends Aram and Deb, Aram sent along this article on GameDev about Bartle’s Taxonomy.  I really appreciate all the useful links in this article, but I think the author has rather missed the point. 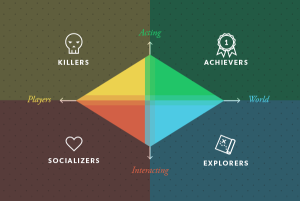 No one expects that a “typology” of player types is going to perfectly reflect the variety of personalities in the “real world” of game players. Like all models, Bartle’s typology is a useful thought exercise for approximating the types of folks that play games.   It could be useful to designers who are wondering if they’ve missed anything glaringly obvious about their design or the players they are appealing to.  The conclusion that “Bartle’s player types theory mostly (and perhaps only) applies to MUD games” seems completely unfounded to me, it applies to other game and game types to the extent that it is a useful description of those who play that game.

In any event, the article is very useful for anyone thinking about game design and player types, so I recommend it for a quick refresher on recent thinking in gamification.