One of the biggest issues facing the contemporary boardgaming industry is the high cost of materials and production. With the trend towards artfully-designed Eurogames and  finely-finished components, it isn’t unusual for a game to set the would-be gamer back $50-$100 or more. Needless to say, this can put a real dent in the gaming budget at a time of global economic recession and financial austerity.

Consequently, one frequently hears the call these days (especially among those who like to game historical periods when corvée labour was commonplace) for more games to be produced at lower cost through greater use of forced, indentured, or conscripted labour.[1] However, such calls have rarely been subjected to any great analytical rigour.[2]

Fortunately, historical economics provides some insight into this pressing contemporary debate. Of particular interest is the era when British prisoners were required to produce wargame maps and pieces as part of their prison employment. The report of the governor of Brixton Prison for the year 1876, notes that—among other things—the prison’s 411 inmates produced some 245 individual “kriegspiel maps,” and six full sets of maps, as well engraving the scales used to measure distance and colouring the wooden blocks used to depict military formations. Might this economic model be appropriate for the present day? 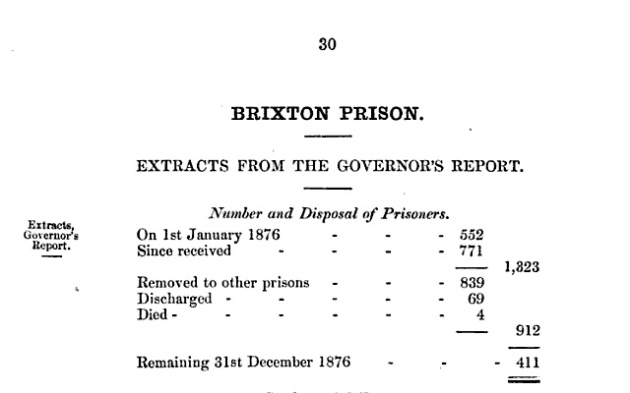 As can be seen from the tabulated information below, the value of each map produced by the prison was estimated at 2/4 ( 2 shillings and fourpence). Allowing for both historical inflation and the modern British decimal system, works out at around £10 per map, which seems somewhat expensive for the usual folded paper hex map, but which might well be quite economical if these were nicely mounted pieces with attractive decorative elements.

It is more difficult to calculate the per-unit cost for colouring kriegspiel blocks. Although the records inform us that inmates were paid between 9 1/2p and 1s per day for this (between £3.80 and £4.80 per day in current values), no data is provided on how many wooden kriegspiel blocks were produced per worker per day (WKBpwd). Based on my own participatory ethnographic research on the tedium of applying hundreds of small stickers to little wooden blocks this seems quite a bargain. Overall, our research strongly suggests real economic advantages in shifting to a prison-based system of games manufacture, although the return on investment would obviously be greatest in those gaming areas where incarcerated criminals have the most substantial comparative advantage.

Finally, we can’t help but notice that Brixton Prison appears to have shrunk in size by 141 inmates during 1876—and that, according the table above, some inmates were employed in the task of “drawing prison plans” and “opening drains”. Whether there is a correlation between work tasks and the rate of successful prison escape is thus an interesting area for future scholarship (or, for that matter, a possible Brian Train boardgame).

[2] This, on the other hand, is absolutely true.

SOURCE:  Great Britain, Parliament, House of Commons, Report of the Directors of Convict Prisons on the Discipline and Management of Millbank and Pentonville Prisons and of Borstal Brixton, Chatham, Dartmoor, Portland, Portsmouth, Woking and Scrubs Prisons for Male Convicts with Eulham and Woking Prisons for Female Convicts Also the Convict Establishment in Western Australia for the Year 1876, via Google eBooks.