For those whose daily business might not permit them the most informative & erudite pleasure of perusing the pages of the Siam Repository—A Summary of Asiatic Intelligence, we are most pleased to report from the July (1872) issue that Queen Victoria’s third son, the young Prince Arthur, has been extolling the virtues of wargaming among his fellow officers. According to reports now reaching these dominions, colonies, and distant foreign lands, the Prince has expressed the belief that these tabletop exercises (imported from the Continent) could be of great value to officers training for war.

Our esteemed Canadian readers will know Prince Arthur well, of course, from his service as a young officer with the Montreal detachment of the Rifle Brigade, which played such an important role in safeguarding the safety & security of Her Majesty’s most loyal Canadian subjects against the pernicious aggressions of the Fenians. Indeed, the Prince himself served with honour at the Battle of Eccles Hill, where a Fenian invasion from Vermont was turned back by rifle, sword, and bayonet.

One only hopes that this young man—imbued with remarkable skills both diplomatic and military, beloved of the common person, and so insightful in matters of wargaming—might, in his later years, serve as 10th Governor General of Canada.

Have trouble fitting everyone in the room during your wargaming sessions? You’re not alone, as is evident from this 21 March 1873 exchange in the British House of Commons between MP Henry Samuelson and Secretary of State for War Edward Cardwell: 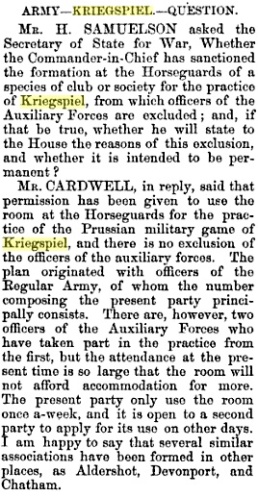