Crisis Response – from your brains to print ready 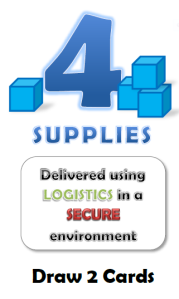 A sample card from the game. You can draw this and 50+ other cards and use them to save lives in Crisis Response.

While preparing a short elective course on strategic coordination in crisis response, I was inspired by our discussion at Connections on the Haiti GameLab design challenge and started putting together a very simple card game that I’m currently calling Crisis Response (though other name suggestions welcome!). During a whirlwind week of travel (and a few moments of rare relaxation), I managed to playtest the design with five different groups (some policymakers during the course, some colleagues at work, and some other friends).Some quick reflections on what we’ve learned so far playing the game:

Coordination is difficult – Beyond just deciding who plays what cards, the game also reflects other coordination challenges: Different timelines (the foreign military leaves after five rounds), different capacities of actors (who draw from different decks), sequencing issues and the trade-off between investment in future capacity and current delivery. Even with really good gamers, coordinating and planning as much as possible, we’ve made a few mistakes that really hurt us later in game.

And people don’t make coordination any easier on themselves – While I don’t give very much instruction on how the group should play together (other than not letting them take back a card that has been played), it is interesting to watch players:

It is useful:  Having people play a game, think about the cards they are playing and the dynamics of the game, think about how they would improve next time (everyone, so far, has been interested in playing a second time, though time often didn’t permit), and why the game was designed as it was, has led to some thoughtful discussions about the challenges faced in coordination (see quote below) and a better understanding of the roles, capacities and objectives of the actors involved in crisis response.

I was the foreign military, and though I could’ve done anything, I realized halfway through that I needed to let the national government do what it could or it wouldn’t work – course participant

I don’t consider this at all a “finished” design – curious to hear what PaxSims readers think of it and would recommend.  One thing it is definitely missing right now is instructive and flavor text – the italics included on a few cards is representative, but would be great to hear from SMEs on a sentence or two for each card, what should each card teach?  Obviously, the game could be developed in a lot of directions, including a development expansion we discussed, which might help us all to better understand the tensions between coordination humanitarian response and development.

You can print everything from the PDFs linked below (you’ll need around 125 3″ x 5″ note cards, have a few extra onhand in case you have printer feeding errors). You’ll also need 3 friends so you can play all four roles (NGOs, national government, foreign military, UN) and some markers (I use little plastic blue counting cubes) to represent supplies.

3 responses to “Crisis Response – from your brains to print ready”