Just returning from another delivery of Carana in Nairobi – our 13th delivery of the core course and 14th class of Caranas (or our 39th, 40th and 41st parallel universe Caranas). We had a very good group of students, the whole range of expertise and seniority in the Bank, from junior staff on their first assignment to some managers and senior team leaders, resulting in a tremendous amount of exchange between students. This is an important feature of the success of the course – our course participants often don’t realize until the end of the week how we’ve tricked them into helping us to teach their peers through the simulation and other group work. If we were to ask them in advance to teach their peers, we’d get a few hours (if we were lucky) of powerpoint dumps of varying quality, but for the course we just stick the participants in the fictional (yet fairly realistic) world of Carana. In the simulation, the participants need to apply their knowledge and they can actively debate policy and practice with just a bit of guidance from us – ending up training each other very intensively for four days.

The recovery plans for this group of Caranas were basically “okay” – no major missteps, no massive failures, one of the teams resorted to using the military to break the coal strike, a few lingering security issues persisted that could go horribly wrong, one group completely ignored the threat from the Presidential Guard despite repeating warnings. For this delivery, our fearless troupe of SimMasters (Marcelo, Anne, Alys, Sarah and I and Khadija in training) agreed that we got a particularly technocratic response to the issues – basically the teams ignored a lot of the ethnic tensions, their roles’ own personal motives (patronage networks they represent, personal incentives) and the history of the country (that got Carana into the civil war) in favor of recommending the kind of blanket solutions we, the international community, often push – demobilize to hit some target, often with disregard for the composition and purpose of the resulting army; treat elections as a milestone to hit rather than a national discussion and opportunity for reconciliation; provide health and education for “development as usual” and build roads and get the infrastructure repaired so that the economy can get going again, regardless of who benefits (again, often ignorant of the drivers that led to the conflict). This happens a lot in Carana – while we give people roles with backgrounds that connect them to particular ethnic groups or even personal incentives for malicious behavior, we rarely can replicate in the simulation the kind of cross purposes or even antagonism that we see in real life. In that respect, I think we fall short a bit in our simulation in tapping some of the real power of “role-playing”.
As we rarely get a “really good” plan, these outcomes generally serve as teaching moments. Even with the best of intentions and cooperation, this kind of work is difficult.

That is, despite the tendency of people to “play nice” in the Carana simulation and work well together to come up with a plan, even the most technocratic and cooperative solutions are often inadequate to resolve the issues. I think this is partly by design (everything is a priority and there are insufficient resources to do everything), but also partly because a really good plan requires a deep understanding of the underlying drivers of conflict in the simulation. In effect, a cooperative and congenial atmosphere often results in the players ignoring the deeply divisive issues the plan is meant to resolve. Rarely do players step back and consider the ramifications of their interventions. Will their plan result in continued disenfranchisement of the West and South? Have they resolved the tensions around control of the diamonds and timber that were the principal source of financing for the rebels? Have they neutralized the threat of coup from the ousted president who still has links to loyalists in the military? Even after 40+ Caranas, we’ve yet to see a recovery plan that really considers these types of questions and provides “real” answers.
More than 400 people have visited Carana (not including the UN, African Union or AusAID deliveries), and we have extremely positive responses. I continue to believe it is a valuable teaching tool and intend to use it for many more courses to come, but I’m concerned that we’re still missing the mark on simulating the kind of contentious environment that exists in a post-conflict or fragile, highly corrupt and unequal society, where priorities and planning are driven by patronage and personal interests. I’m not disposed to creating “victory conditions” or other artificial incentives for people to play their part, but I am still looking for something to encourage participants to roleplay and replicate the more realistic friction that exists in these environments. Any ideas? 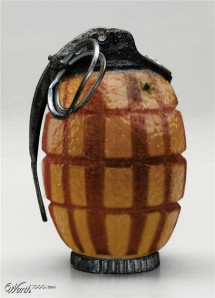 Last month, we recounted the iterative scenario/counter scenario that had cropped up at Carl Prine’s Line of Departure blog, based on a scenario by Stephanie R. Chenault whereby near-future US troops seize an airfield in the fictional country of Orangelandia.

That scenario was later updated last month to include an alternative (more futuristic) invasion scenario offered by blog reader “Move Forward,” followed by Carl’s riposte on how the Orangelandia jihadists would counter this. Both blog posts feature lively commentary by others in the comments section.

I tend to think that Move Forward’s invasion scenario (based on a proposed amphibious/air-droppable Joint Access Vehicle) would likely get stalled in the development phase for a decade, involve billions in cost overruns, prove too risky to actually airdrop, never meet the original design specifications, and turn out to only incrementally augment US military capabilities. I certainly like Carl’s point about the ability of local opponents to adapt cheap low-cost counters for high-cost Western weapons systems, although I think some of the responses are a little too tactical and would have less impact than he suggests. Still, my money is on the brave brothers and sisters of Orangelandia in this fight. For those who read the piece closely, there are quite a few undisguised jabs at recent US policy, from the development of US counter-insurgency doctrine (by “maverick warrior-scholars”) to the 2011 intervention in Libya.