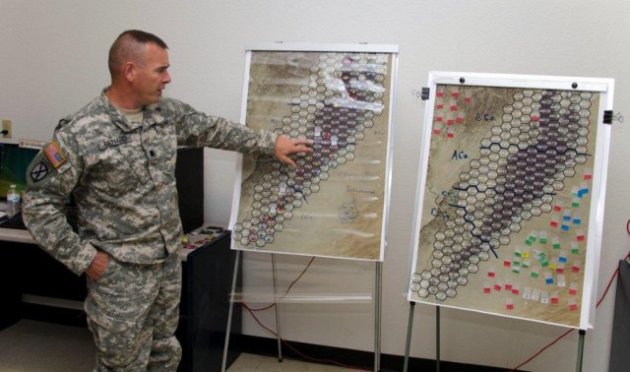 A recent article at military.com discusses the development by the US Army of  “a new war game that will help evaluate the social impact of Army operations”—the Irregular Warfare Tactical War Game.

The Irregular Warfare Tactical War Game, being developed at TRAC WSMR, will be used to assess how Army tactical operations impact the population of a host country. The game system is designed to focus on the tactical level of a battalion sized unit conducting operations in an irregular war. Keeping the game real, the players use the backdrop of Afghanistan, with maps, objectives, operations and other elements all based on information collected from real world sources. In development since 2008, the Irregular Warfare Tactical War Game has already been used by several organizations to conduct some initial exercises with testing of the fully functional prototype that was expected to be finished in November. 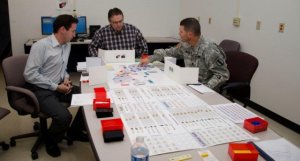 The game, with its large scale simulated world and focus on the tactical unit, is currently being used to analyze if giving greater intelligence access to a company commander will help the company and battalion level units perform better and win local support faster and more effectively. To what level intelligence data needs to be disseminated has been a point of discussion across the Army because the intelligence needs of a company commander are typically specific and tactical in nature. When going against an irregular enemy like the Taliban however, some Army leaders suspect that providing better access to more intelligence could allow the company commanders to make decisions with a more positive impact on the local population.

The game includes a massive amount of play options and features that bring into account the many various elements that would play a part in a modern conflict.

“The way the war game is set up, we have a number of cells effectively competing with each other to influence the population,” Workman said. Player groups include the typical “blue” force, the players controlling the US battalion; a “red” force, with players that control Taliban forces and criminal elements like the drug trade in the game; and a “green” force, whose players control the indigenous forces like local military and police. Filling out the game world is an “operational wrap around” group that handles larger scale portions of the game like blue force brigade level operations and Taliban regional operations.

Adding more layers to the game are models and simulations that represent other aspects of the modern battlefield. Media reports are simulated and their effect on the population is factored in. Social media is also a factor with the simulation tracking the way that information on a social network passes to friends and family and not directly to the general public like traditional media.

A leadership simulation called “Nexus” is also included in the game. This complex simulation contains the different leadership characters that an Army leader in the field would have to interact with, both directly and indirectly, when conducting operations. Village elders, government officials, and other important individuals can influence a population in different ways, and the factors in these differences and how they interact with each other and the player’s choices. “It gives our players a way to interact with them, to get them to pass out messages that are supportive, or that may not be supportive if the leader doesn’t care for whoever is interacting with them,” said Workman.

Forces and personalities aren’t the only thing in the system; essential services and infrastructure are also in play.

Electricity, water, medical services, even laws and legal cues are incorporated into the game as well. These elements can play a huge role in a population’s outlook and opinions, as the availability of these services increases or decreases.

Just because a player chooses to take action regarding a particular service doesn’t mean it will turn out as expected. Workman explained that, just like in the real world, in the game it’s possible that the contractor hired to improve infrastructure will take the money and run instead of doing the work.

While the current games being run use Afghanistan as the country being simulated, the game is designed to be able to import data on other regions as well, allowing the game to be used to evaluate possible operations anywhere in the world.

You’ll find some additional background on the project in an unclassified presentation made at the MORS Irregular Warfare Analysis Workshop in 2009.

Interesting stuff, although I’m a little puzzled as to why the Red force team contains both “Taliban forces and criminal elements like the drug trade in the game.” Criminal entrepreneurs have their own set of interests which may be quite distinct from those of insurgent groups (and may, in practical terms, overlap with some of the interests of host country actors), so it can be a bit misleading to place them on the same team. A rather better way of handling this, I think, is the way that Volko Ruhnke does it in the forthcoming Columbian insurgency boardgame, Andean Abyss (GMT Games)—probably my favourite insurgency boardgame to date. Brian Train also treats them as separate actors in his unpublished Afghan-themed game Kandahar.