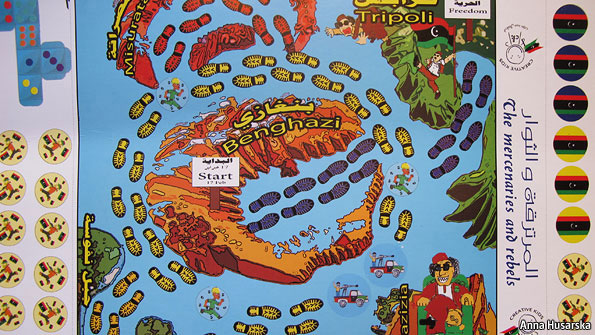 I’m not quite sure how I missed this recent game-related piece in the The Economist—other than that I was headed off to Benghazi myself when it appeared. It would seem that inventive kids in the rebel-held Libyan city have invented a “Mercenaries and Rebels” boardgame in which players try to overthrow the Libyan dictator:

WAITING for the grownups—both the rebels and NATO—to break the stalemate in Libya and enter Tripoli, a group in Benghazi called “Creative kids”, whose members are children and teenagers, have come up with their own way of toppling Colonel Muammar Qaddafi; a giant board game. In “Mercenaries and Rebels” players throw dice to move from prison in Bab Alazizia, Colonel Qaddafi’s home where he delivered his  rant from beneath an umbrella, via Misrata and the Nafusa mountains to Tripoli. The game starts at a square in Benghazi marked February 17th, Libya’s first “day of rage”. It ends at a square in Tripoli marked Freedom. That one, thus far, has no date.

Creative Kids have a Facebook page here, which includes a picture of kids playing a full-sized version of the game.