Managing the “Rizk” of climate change 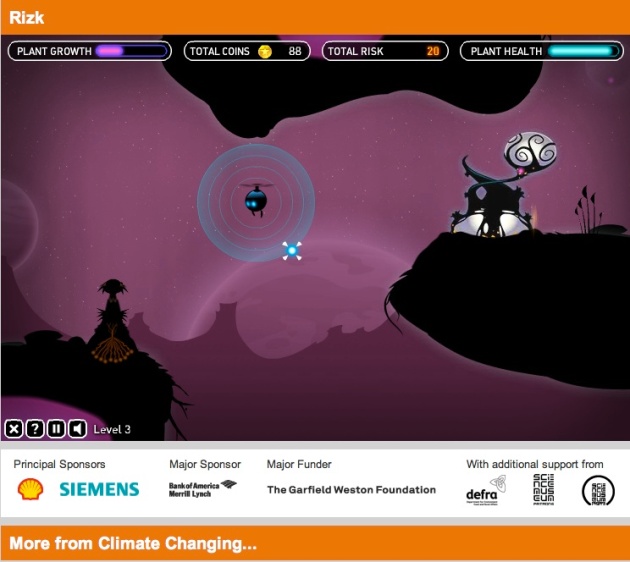 Many belated PaxSims apologies to Adam at the London Science Museum (where I spent many happy hours as a teen), because I only just spotted this feedback from a couple of months ago:

Hi guys, It’s Adam here from the London Science Museum. Hope all is well with you and PaxSims. We’ve just launched our brand new online Flash game, called Rizk. It would be awesome if you featured / reviewed it as well.

Visually influenced by sci-fi posters of the 50’s and 60’s, we created an original risk strategy game set on an alien world where players must find and develop resources to nurture and protect their mother plant whilst defending it from indigenous threats. Every action you take affects the level of risk to your plant and hence there is no perfect strategy for completing the game’s 20 levels. RIZK builds on the classic tower defence model in that you expend wealth (coins) to invest in defenders to mitigate against threats of varying impacts. RIZK, however, is played from a 2-D, side-on perspective much like a platformer. As a result of the 2-D side-on perspective to the game, the enemy’s paths of movement are more varied than a traditional tower defence game. This also allowed us to create very intricate worlds right from the first level. This unique game is launched as a part of Climate Changing… the Science Museum’s three-year series of thought-provoking events, exhibitions and installations. The game is all about understanding risk and its relation to our climate.

The game was designed by Playerthree, and launched back in December 2010.

Rizk is a beautifully-rendered, fluid, and very-engaging game. The game’s commentary about resource scarcity and the environmental consequences of natural resource extraction are subtle—perhaps a little too subtle at times, given the likely attention span of the youthful demographic that it presumably targets. On the other hand, I’m sure it must pull folks onto the Science Museum’s website, where there is a great deal of additional information available.

Give your own green thumbs a try, and see how you do! (For those of you with less patience or an unrelenting propensity to kill houseplants let alone alien flora, you’ll find level walkthroughs available online here.)

Delft University of Technology in the Netherlands is currently advertising a tenure-track vacancy for a Professor of Serious Gaming for Complex Multi-Actor Systems, Decision-and Policy Making:

Applicants should have a PhD degree in a relevant field of social science, such as policy sciences, organization and management, policy analysis, or systems analysis. He/she should have proven experience as an independent and productive researcher as demonstrated by publications in scientific journals relevant to the research area. She/he should be well embedded in the international scientific community of gaming-simulation, policy sciences and policy analysis, and infrastructures. The candidate preferably has proven experience with relevant quantitative, qualitative and design research methods, and demonstrable affinity for the integrated sociotechnical systems approach to infrastructure systems as practiced at the TPM faculty. He/she preferably also has a multidisciplinary research attitude, a track record in multidisciplinary research collaboration and excellent communication skills.

Further details are available at the link above.

The online International Journal of Role-Playing is now accepting submissions for its third issue, due to be published in Winter 2011.

The International Journal of Role-Playing invites researchers, designers, developers, academics, artists and others involved in the growing field of research related to role-playing to submit articles. The IJRP is a peer-reviewed journal, and welcomes submissions from any sphere of interest, knowledge network, research field or de-development sector that directly or indirectly relates to role-playing interests.

Potential topics include but are certainly not limited to the following:

The International Journal of Role-Playing is a biannual international journal that covers all aspects of role-playing, irrespective of the medium, platform or intent. The IJRP specifically aims to act as the focal point, for pushing the limits of role-playing knowledge, and to improve sharing of knowledge across the knowledge networks involved with role-playing- and related work, notably the industry, the academia and the arts. The journal will encourage the exchange of ideas and experiences, and will be a free, online forum where knowledge can be harvested. In realizing that the knowledge networks involved with role-playing- and related work are based in a variety of interest spheres, which write and publish their work in different ways, the IJRP will accommodate the knowledge sharing principles of the various networks.

The deadline for submissions is 1 August 2011. Further details can be found at the IJRP website.